In our previous dog groomer example we could clearly see through our scattergram that maintenance costs were related to the number of dogs groomed. Remember that that was our initial diagnostic step before we moved on to more detailed analysis of our costs. 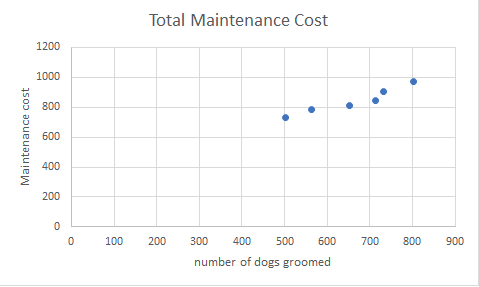 The scattergram above shows a relatively linear relationship between the maintenance costs (cost-Y) and the number of dogs groomed (activity -X) we can use the high-low method to estimate which portion of our expense is the fixed portion and which is the variable portion.

We can now calculate the fixed cost component. We can use the total cost of either the high or the low and subtract the variable component:

This method can only be used if the scattergram that you used for your initial testing shows a linear correlation between the costs and the quantity! Also note that although this method is simple to apply it only uses the two points of data. Having only two points of data might produce results that are not accurate.  Because of this, the next section on the least squares regression will probably be more useful and reliable for determining the fixed and variable portions of mixed costs.