We will begin solving equations below, but first we need to understand what a solution to an equation looks like. The purpose in solving an equation is to find the value or values of the variable that make each side of the equation the same — it is the answer to the puzzle.

Solution of an Equation

A solution of an equation is a value of a variable that makes a true statement when substituted into the equation.

Determine whether a number is a solution to an equation.

In the following example, we will show how to determine whether a number is a solution to an equation that contains addition and subtraction. You can use this idea to check your work later when you are solving equations.

Now it is your turn to determine whether a fraction is the solution to an equation.

Let’s use a model to help understand how the process of solving an equation is like solving a puzzle. An envelope represents the variable – since its contents are unknown – and each counter represents one.

Let’s write algebraically the steps we took to discover how many counters were in the envelope.

Now let’s check our solution. We substitute [latex]5[/latex] for [latex]x[/latex] in the original equation and see if we get a true statement.

[latex]8=8\quad\checkmark[/latex]  Our solution is correct. Five counters in the envelope plus three more equals eight.

Write an equation modeled by the envelopes and counters, and then solve the equation:

We can see that there is one counter in the envelope. This can be shown algebraically as:

Since [latex]x=1[/latex] makes the statement true, we know that [latex]1[/latex] is indeed a solution.

Our puzzle has given us an idea of what we need to do to solve an equation. The goal is to isolate the variable by itself on one side of the equation. In the previous examples, we used the Subtraction Property of Equality, which states that when we subtract the same quantity from both sides of an equation, we still have equality.

In all the equations we have solved so far, a number was added to the variable on one side of the equation. We used subtraction to “undo” the addition in order to isolate the variable.

But suppose we have an equation with a number subtracted from the variable, such as [latex]x - 5=8[/latex]. We want to isolate the variable, so to “undo” the subtraction we will add the number to both sides.

When you add or subtract the same quantity from both sides of an equation, you still have equality.

We introduced the Subtraction Property of Equality earlier by modeling equations with envelopes and counters. The image below models the equation [latex]x+3=8[/latex].

The goal is to isolate the variable on one side of the equation. So we “took away” [latex]3[/latex] from both sides of the equation and found the solution [latex]x=5[/latex].

Some people picture a balance scale, as in the image below, when they solve equations. 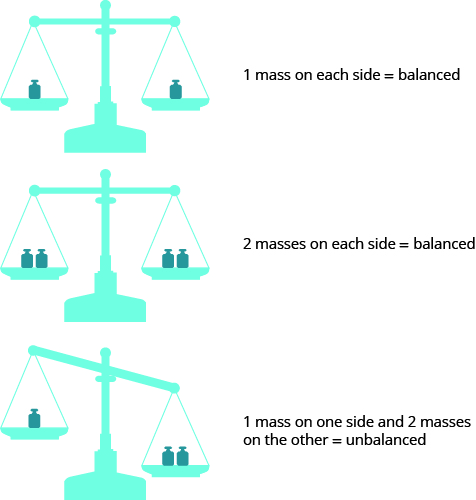 The quantities on both sides of the equal sign in an equation are equal, or balanced. Just as with the balance scale, whatever you do to one side of the equation you must also do to the other to keep it balanced.

In the following examples we review how to use Subtraction and Addition Properties of Equality to solve equations. We need to isolate the variable on one side of the equation. You can check your solutions by substituting the value into the original equation to make sure you have a true statement.

Solution:
To isolate [latex]x[/latex], we undo the addition of [latex]11[/latex] by using the Subtraction Property of Equality.

Now you can try solving an equation that requires using the addition property.

Now you can try using the addition property to solve an equation.

In the following video, we present more examples of solving equations using the addition and subtraction properties.

You may encounter equations that contain fractions or decimals — especially in financial applications — so let’s practice solving those in the following problems.

All of the equations we have solved so far have been of the form [latex]x+a=b[/latex] or [latex]x-a=b[/latex]. We were able to isolate the variable by adding or subtracting the constant term. Now we’ll see how to solve equations that involve division.

We will model an equation with envelopes and counters. 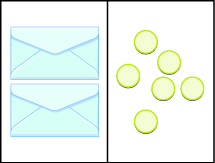 Here, there are two identical envelopes that contain the same number of counters. Remember, the left side of the workspace must equal the right side, but the counters on the left side are “hidden” in the envelopes. So how many counters are in each envelope? 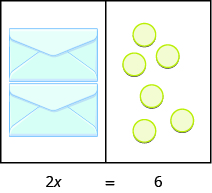 We can divide both sides of the equation by [latex]2[/latex] as we did with the envelopes and counters.

We found that each envelope contains [latex]\text{3 counters.}[/latex] Does this check? We know [latex]2\cdot 3=6[/latex], so it works. Three counters in each of two envelopes does equal six.

Another example is shown below. 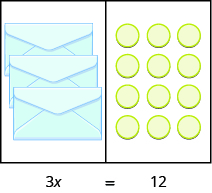 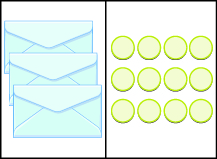 The equation that models the situation is [latex]3x=12[/latex]. We can divide both sides of the equation by [latex]3[/latex].

Stated simply, when you divide both sides of an equation by the same quantity, you still have equality.

To solve this equation, we use the Division Property of Equality to divide both sides by [latex]4[/latex].

Now you can try to solve an equation that requires division and includes negative numbers.

Now, consider the equation [latex]\Large\frac{x}{4}\normalsize=3[/latex]. We want to know what number divided by [latex]4[/latex] gives [latex]3[/latex]. So to “undo” the division, we will need to multiply by [latex]4[/latex]. The Multiplication Property of Equality will allow us to do this. This property says that if we start with two equal quantities and multiply both by the same number, the results are equal.

Stated simply, when you multiply both sides of an equation by the same quantity, you still have equality.

Previously we learned how to “undo” multiplication by dividing. How do you think we “undo” division?

Next, we will show an example that requires us to use multiplication to undo division.

Now see if you can solve a problem that requires multiplication to undo division. Recall the rules for multiplying two negative numbers — two negatives give a positive when they are multiplied.

As you begin to solve equations that require several steps you may find that you end up with an equation that looks like the one in the next example, with a negative variable.  As a standard practice, it is good to ensure that variables are positive when you are solving equations. The next example will show you how.

Now you can try to solve an equation with a negative variable.

The next video includes examples of using the division and multiplication properties to solve basic equations.