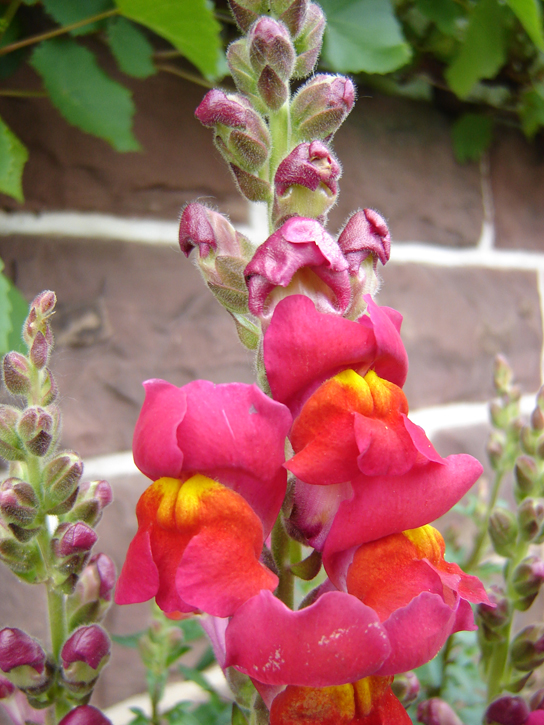 Mendel’s results, that traits are inherited as dominant and recessive pairs, contradicted the view at that time that offspring exhibited a blend of their parents’ traits. However, the heterozygote phenotype occasionally does appear to be intermediate between the two parents. For example, in the snapdragon, Antirrhinum majus (Figure 1), a cross between a homozygous parent with white flowers (CWCW) and a homozygous parent with red flowers (CRCR) will produce offspring with pink flowers (CRCW). (Note that different genotypic abbreviations are used for Mendelian extensions to distinguish these patterns from simple dominance and recessiveness.) This pattern of inheritance is described as incomplete dominance, denoting the expression of two contrasting alleles such that the individual displays an intermediate phenotype. The allele for red flowers is incompletely dominant over the allele for white flowers. However, the results of a heterozygote self-cross can still be predicted, just as with Mendelian dominant and recessive crosses. In this case, the genotypic ratio would be 1 CRCR:2 CRCW:1 CWCW, and the phenotypic ratio would be 1:2:1 for red:pink:white.

Incomplete dominance can be seen in several types of flowers, including pink tulips, carnations and roses—any pink flowers in these are due to the mixing of red and white alleles. Incomplete dominance can also be observed in some animals, such as rabbits. When a long-furred Angora breeds with a short-furred Rex, the offspring have medium-length fur. Tail length in dogs is similarly impacted by genes that display incomplete dominance patterns. 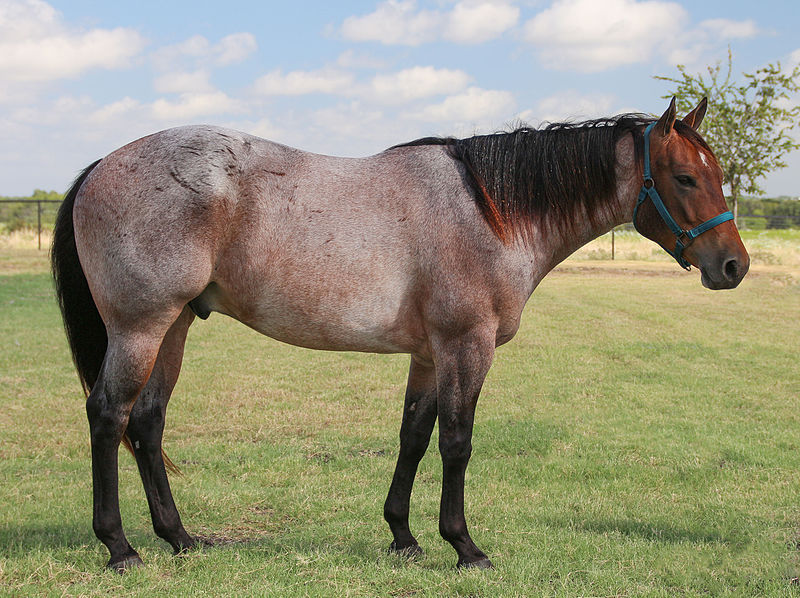 A variation on incomplete dominance is codominance, in which both alleles for the same characteristic are simultaneously expressed in the heterozygote. An example of codominance is the MN blood groups of humans. The M and N alleles are expressed in the form of an M or N antigen present on the surface of red blood cells. Homozygotes (LMLM and LNLN) express either the M or the N allele, and heterozygotes (LMLN) express both alleles equally. In a self-cross between heterozygotes expressing a codominant trait, the three possible offspring genotypes are phenotypically distinct. However, the 1:2:1 genotypic ratio characteristic of a Mendelian monohybrid cross still applies.

Codominance can also be seen in human blood types: the AB blood type is a result of both the IA allele and the IB allele being codominant. The roan coat color in horses is also an example of codominance. A “red” roan results from the mating of a chestnut parent and a white parent (Figure 2). We know this is codominance because individual hairs are either chestnut or they are white, leading to the red roan overall appearance.

We’ve already discussed incomplete dominance in flowers (Figure 1). What do you think a flower would look like if the red and white phenotypes were codominant instead?

Show Answer
The flower would have both red and white petals, like this Rhododendron: 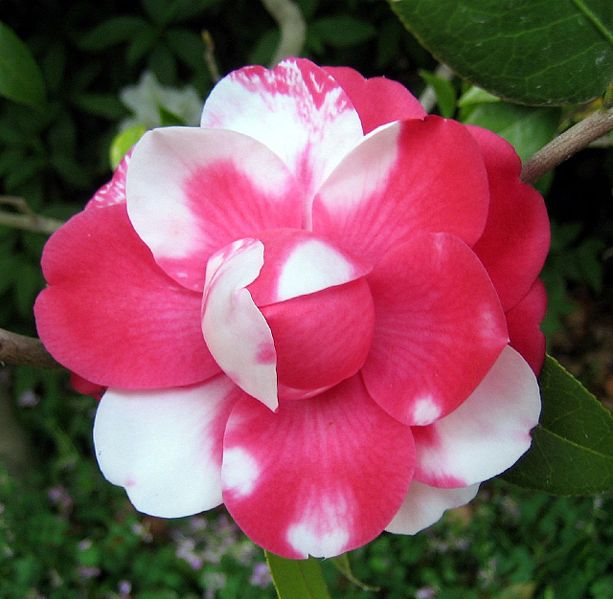 Figure 3. Codominance is shown in this rhododendron. 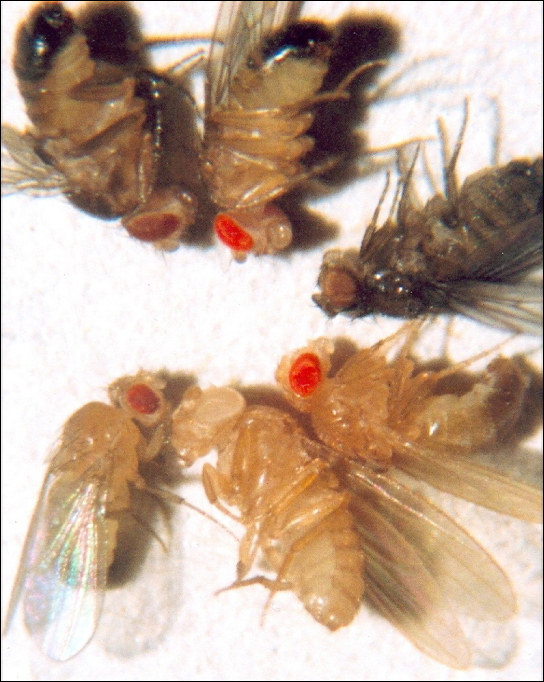 Figure 4. In Drosophila, the gene for eye color is located on the X chromosome. Clockwise from top left are brown, cinnabar, sepia, vermilion, white, and red. Red eye color is wild-type and is dominant to white eye color.

Eye color in Drosophila was one of the first X-linked traits to be identified. Thomas Hunt Morgan mapped this trait to the X chromosome in 1910. Like humans, Drosophila males have an XY chromosome pair, and females are XX. In flies, the wild-type eye color is red (XW) and it is dominant to white eye color (Xw) (Figure 4). Because of the location of the eye-color gene, reciprocal crosses do not produce the same offspring ratios. Males are said to be hemizygous, because they have only one allele for any X-linked characteristic. Hemizygosity makes the descriptions of dominance and recessiveness irrelevant for XY males. Drosophila males lack a second allele copy on the Y chromosome; that is, their genotype can only be XWY or XwY. In contrast, females have two allele copies of this gene and can be XWXW, XWXw, or XwXw.

In an X-linked cross, the genotypes of F1 and F2 offspring depend on whether the recessive trait was expressed by the male or the female in the P0 generation. With regard to Drosophila eye color, when the P0 male expresses the white-eye phenotype and the female is homozygous red-eyed, all members of the F1 generation exhibit red eyes. The F1 females are heterozygous (XWXw), and the males are all XWY, having received their X chromosome from the homozygous dominant P0 female and their Y chromosome from the P0 male. A subsequent cross between the XWXw female and the XWY male would produce only red-eyed females (with XWXW or XWXw genotypes) and both red- and white-eyed males (with XWY or XwY genotypes). Now, consider a cross between a homozygous white-eyed female and a male with red eyes (Figure 5). The F1 generation would exhibit only heterozygous red-eyed females (XWXw) and only white-eyed males (XwY). Half of the F2 females would be red-eyed (XWXw) and half would be white-eyed (XwXw). Similarly, half of the F2 males would be red-eyed (XWY) and half would be white-eyed (XwY). 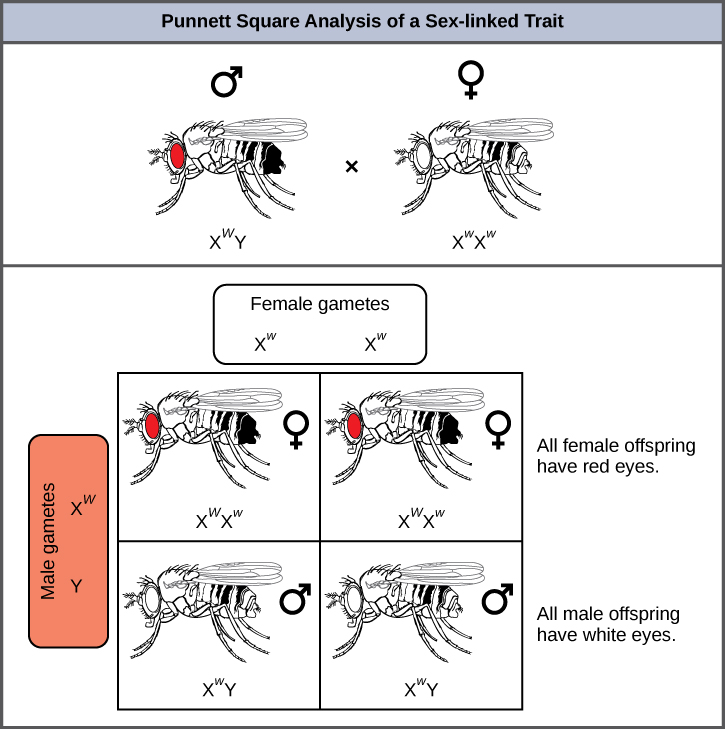 Figure 5. Punnett square analysis is used to determine the ratio of offspring from a cross between a red-eyed male fruit fly and a white-eyed female fruit fly.