For a cell to function properly, necessary proteins must be synthesized at the proper time. All cells control or regulate the synthesis of proteins from information encoded in their DNA. The process of turning on a gene to produce RNA and protein is called gene expression. Whether in a simple unicellular organism or a complex multi-cellular organism, each cell controls when and how its genes are expressed. For this to occur, there must be a mechanism to control when a gene is expressed to make RNA and protein, how much of the protein is made, and when it is time to stop making that protein because it is no longer needed.

The regulation of gene expression conserves energy and space. It would require a significant amount of energy for an organism to express every gene at all times, so it is more energy efficient to turn on the genes only when they are required. In addition, only expressing a subset of genes in each cell saves space because DNA must be unwound from its tightly coiled structure to transcribe and translate the DNA. Cells would have to be enormous if every protein were expressed in every cell all the time.

The control of gene expression is extremely complex. Malfunctions in this process are detrimental to the cell and can lead to the development of many diseases, including cancer.

Gene regulation is how a cell controls which genes, out of the many genes in its genome, are “turned on” (expressed). Thanks to gene regulation, each cell type in your body has a different set of active genes—despite the fact that almost all the cells of your body contain the exact same DNA. These different patterns of gene expression cause your various cell types to have different sets of proteins, making each cell type uniquely specialized to do its job.

For example, one of the jobs of the liver is to remove toxic substances like alcohol from the bloodstream. To do this, liver cells express genes encoding subunits (pieces) of an enzyme called alcohol dehydrogenase. This enzyme breaks alcohol down into a non-toxic molecule. The neurons in a person’s brain don’t remove toxins from the body, so they keep these genes unexpressed, or “turned off.” Similarly, the cells of the liver don’t send signals using neurotransmitters, so they keep neurotransmitter genes turned off (Figure 1). 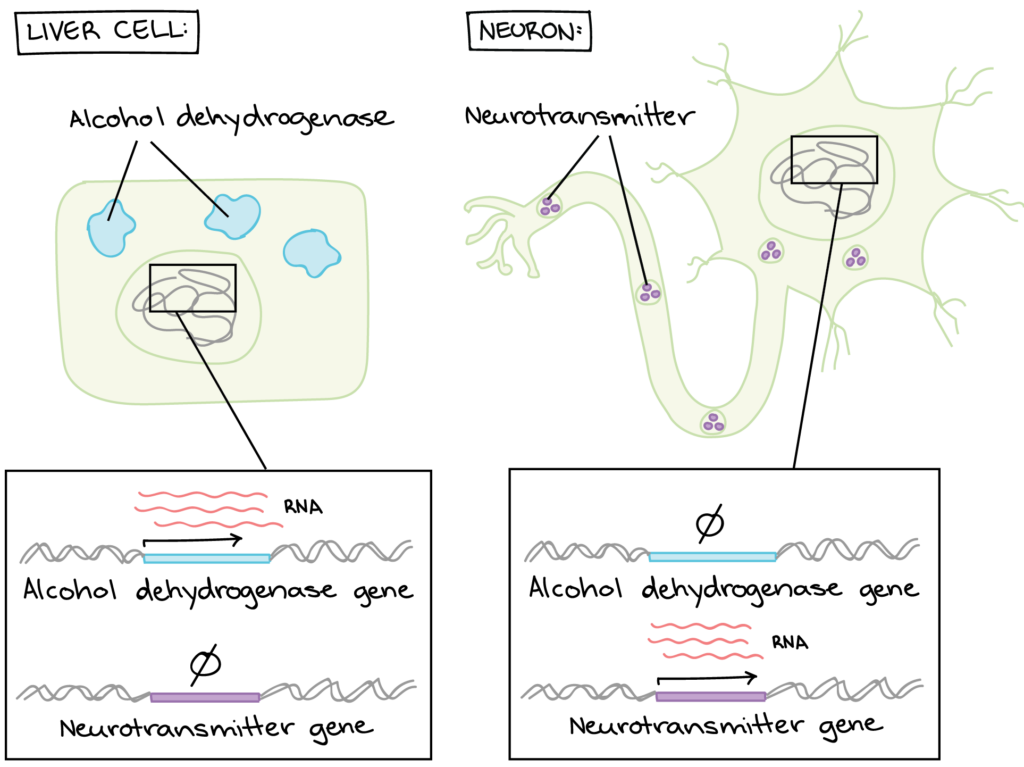 There are many other genes that are expressed differently between liver cells and neurons (or any two cell types in a multicellular organism like yourself).

How do cells “decide” which genes to turn on?

Now there’s a tricky question! Many factors that can affect which genes a cell expresses. Different cell types express different sets of genes, as we saw above. However, two different cells of the same type may also have different gene expression patterns depending on their environment and internal state.

Broadly speaking, we can say that a cell’s gene expression pattern is determined by information from both inside and outside the cell.

How do these cues help a cell “decide” what genes to express? Cells don’t make decisions in the sense that you or I would. Instead, they have molecular pathways that convert information—such as the binding of a chemical signal to its receptor—into a change in gene expression.

As an example, let’s consider how cells respond to growth factors. A growth factor is a chemical signal from a neighboring cell that instructs a target cell to grow and divide. We could say that the cell “notices” the growth factor and “decides” to divide, but how do these processes actually occur? 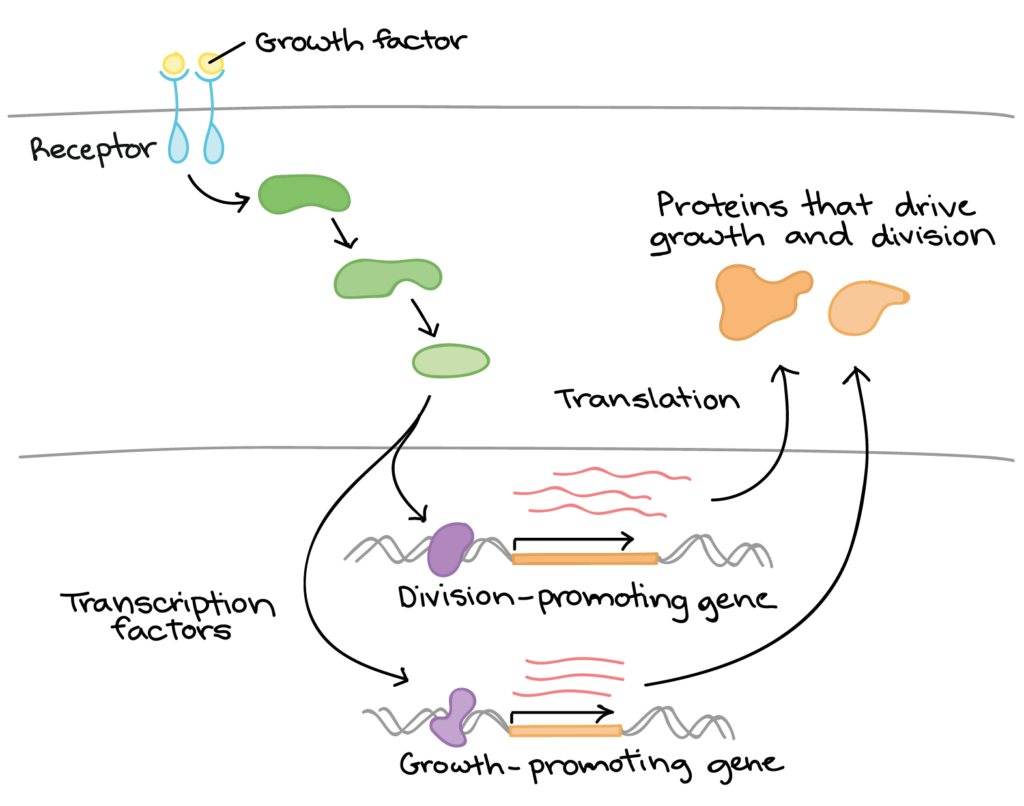 This is just one example of how a cell can convert a source of information into a change in gene expression. There are many others, and understanding the logic of gene regulation is an area of ongoing research in biology today.

In Summary: Expression of Genes