Unlike the prokaryotic polymerase that can bind to a DNA template on its own, eukaryotes require several other proteins, called transcription factors, to first bind to the promoter region and then help recruit the appropriate polymerase.

RNA polymerase I is located in the nucleolus, a specialized nuclear substructure in which ribosomal RNA (rRNA) is transcribed, processed, and assembled into ribosomes (Table 1). The rRNA molecules are considered structural RNAs because they have a cellular role but are not translated into protein. The rRNAs are components of the ribosome and are essential to the process of translation. RNA polymerase I synthesizes all of the rRNAs except for the 5S rRNA molecule. The “S” designation applies to “Svedberg” units, a nonadditive value that characterizes the speed at which a particle sediments during centrifugation.

RNA polymerase II is located in the nucleus and synthesizes all protein-coding nuclear pre-mRNAs. Eukaryotic pre-mRNAs undergo extensive processing after transcription but before translation (Figure 1). For clarity, this module’s discussion of transcription and translation in eukaryotes will use the term “mRNAs” to describe only the mature, processed molecules that are ready to be translated. RNA polymerase II is responsible for transcribing the overwhelming majority of eukaryotic genes. 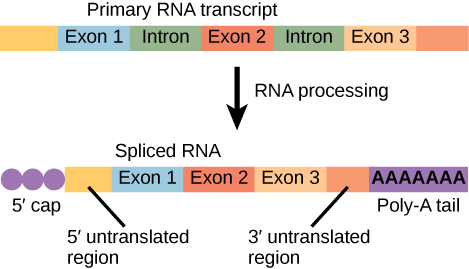 Figure 1. Eukaryotic mRNA contains introns that must be spliced out. A 5′ cap and 3′ poly-A tail are also added.

RNA polymerase III is also located in the nucleus. This polymerase transcribes a variety of structural RNAs that includes the 5S pre-rRNA, transfer pre-RNAs (pre-tRNAs), and small nuclear pre-RNAs. The tRNAs have a critical role in translation; they serve as the adaptor molecules between the mRNA template and the growing polypeptide chain. Small nuclear RNAs have a variety of functions, including “splicing” pre-mRNAs and regulating transcription factors.

Eukaryotic promoters are much larger and more intricate than prokaryotic promoters. However, both have a sequence similar to the -10 sequence of prokaryotes. In eukaryotes, this sequence is called the TATA box, and has the consensus sequence TATAAA on the coding strand. It is located at -25 to -35 bases relative to the initiation (+1) site (Figure 2). This sequence is not identical to the E. coli -10 box, but it conserves the A–T rich element. The thermostability of A–T bonds is low and this helps the DNA template to locally unwind in preparation for transcription. 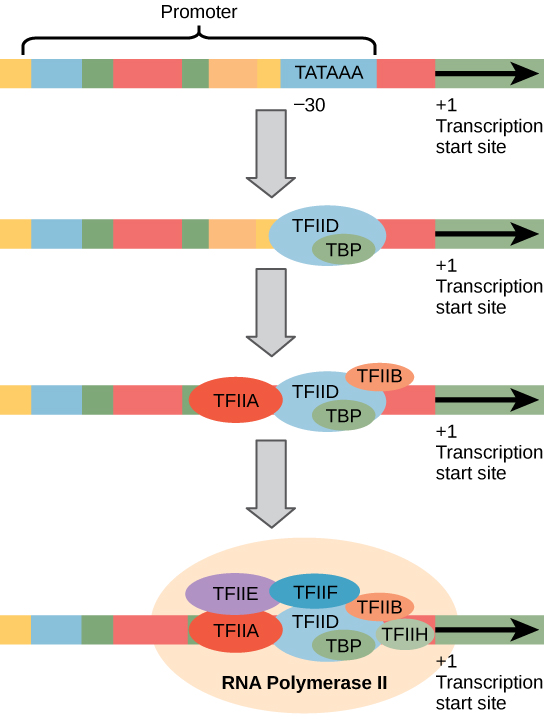 A scientist splices a eukaryotic promoter in front of a bacterial gene and inserts the gene in a bacterial chromosome. Would you expect the bacteria to transcribe the gene?

Some eukaryotic promoters also have a conserved CAAT box (GGCCAATCT) at approximately -80. Further upstream of the TATA box, eukaryotic promoters may also contain one or more GC-rich boxes (GGCG) or octamer boxes (ATTTGCAT). These elements bind cellular factors that increase the efficiency of transcription initiation and are often identified in more “active” genes that are constantly being expressed by the cell.

The Evolution of Promoters

The evolution of genes may be a familiar concept. Mutations can occur in genes during DNA replication, and the result may or may not be beneficial to the cell. By altering an enzyme, structural protein, or some other factor, the process of mutation can transform functions or physical features. However, eukaryotic promoters and other gene regulatory sequences may evolve as well. For instance, consider a gene that, over many generations, becomes more valuable to the cell. Maybe the gene encodes a structural protein that the cell needs to synthesize in abundance for a certain function. If this is the case, it would be beneficial to the cell for that gene’s promoter to recruit transcription factors more efficiently and increase gene expression.

Scientists examining the evolution of promoter sequences have reported varying results. In part, this is because it is difficult to infer exactly where a eukaryotic promoter begins and ends. Some promoters occur within genes; others are located very far upstream, or even downstream, of the genes they are regulating. However, when researchers limited their examination to human core promoter sequences that were defined experimentally as sequences that bind the preinitiation complex, they found that promoters evolve even faster than protein-coding genes.

Promoter Structures for RNA Polymerases I and III

The processes of bringing RNA polymerases I and III to the DNA template involve slightly less complex collections of transcription factors, but the general theme is the same.

Eukaryotic transcription is a tightly regulated process that requires a variety of proteins to interact with each other and with the DNA strand. Although the process of transcription in eukaryotes involves a greater metabolic investment than in prokaryotes, it ensures that the cell transcribes precisely the pre-mRNAs that it needs for protein synthesis.

Following the formation of the preinitiation complex, the polymerase is released from the other transcription factors, and elongation is allowed to proceed as it does in prokaryotes with the polymerase synthesizing pre-mRNA in the 5′ to 3′ direction. As discussed previously, RNA polymerase II transcribes the major share of eukaryotic genes, so this section will focus on how this polymerase accomplishes elongation and termination.

Although the enzymatic process of elongation is essentially the same in eukaryotes and prokaryotes, the DNA template is more complex. When eukaryotic cells are not dividing, their genes exist as a diffuse mass of DNA and proteins called chromatin. The DNA is tightly packaged around charged histone proteins at repeated intervals. These DNA–histone complexes, collectively called nucleosomes, are regularly spaced and include 146 nucleotides of DNA wound around eight histones like thread around a spool.

For polynucleotide synthesis to occur, the transcription machinery needs to move histones out of the way every time it encounters a nucleosome. This is accomplished by a special protein complex called FACT, which stands for “facilitates chromatin transcription.” This complex pulls histones away from the DNA template as the polymerase moves along it. Once the pre-mRNA is synthesized, the FACT complex replaces the histones to recreate the nucleosomes.