After pollen is deposited on the stigma, it must germinate and grow through the style to reach the ovule. The microspores, or the pollen, contain two cells: the pollen tube cell and the generative cell. The pollen tube cell grows into a pollen tube through which the generative cell travels. The germination of the pollen tube requires water, oxygen, and certain chemical signals. As it travels through the style to reach the embryo sac, the pollen tube’s growth is supported by the tissues of the style. In the meantime, if the generative cell has not already split into two cells, it now divides to form two sperm cells. The pollen tube is guided by the chemicals secreted by the synergids present in the embryo sac, and it enters the ovule sac through the micropyle. Of the two sperm cells, one sperm fertilizes the egg cell, forming a diploid zygote; the other sperm fuses with the two polar nuclei, forming a triploid cell that develops into the endosperm. Together, these two fertilization events in angiosperms are known as double fertilization (Figure 1). After fertilization is complete, no other sperm can enter. The fertilized ovule forms the seed, whereas the tissues of the ovary become the fruit, usually enveloping the seed. 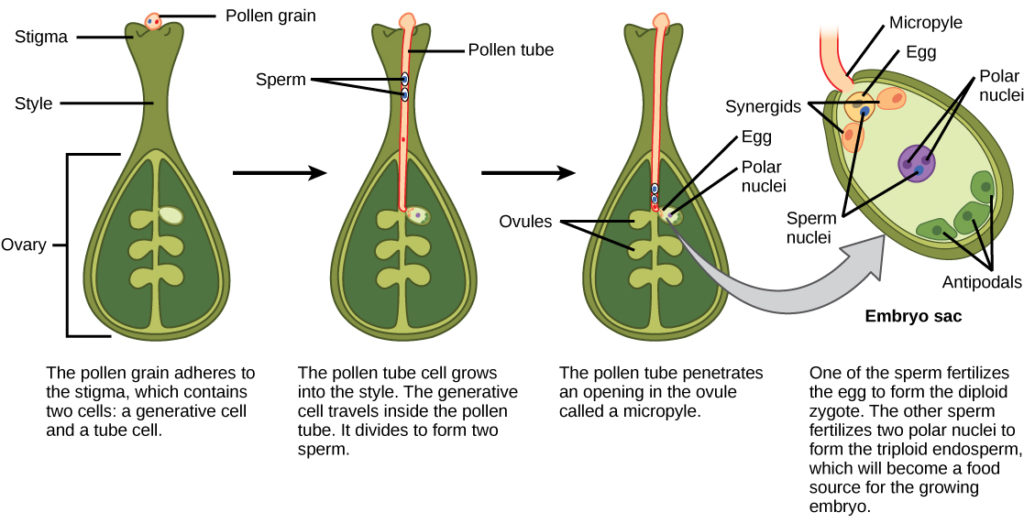 After fertilization, the zygote divides to form two cells: the upper cell, or terminal cell, and the lower, or basal, cell. The division of the basal cell gives rise to the suspensor, which eventually makes connection with the maternal tissue. The suspensor provides a route for nutrition to be transported from the mother plant to the growing embryo. The terminal cell also divides, giving rise to a globular-shaped proembryo (Figure 2a). In dicots (eudicots), the developing embryo has a heart shape, due to the presence of the two rudimentary cotyledons (Figure 2b). In non-endospermic dicots, such as Capsella bursa, the endosperm develops initially, but is then digested, and the food reserves are moved into the two cotyledons. As the embryo and cotyledons enlarge, they run out of room inside the developing seed, and are forced to bend (Figure 2c). Ultimately, the embryo and cotyledons fill the seed (Figure 2d), and the seed is ready for dispersal. Embryonic development is suspended after some time, and growth is resumed only when the seed germinates. The developing seedling will rely on the food reserves stored in the cotyledons until the first set of leaves begin photosynthesis.

Figure 2. Shown are the stages of embryo development in the ovule of a shepherd’s purse (Capsella bursa). After fertilization, the zygote divides to form an upper terminal cell and a lower basal cell. (a) In the first stage of development, the terminal cell divides, forming a globular pro-embryo. The basal cell also divides, giving rise to the suspensor. (b) In the second stage, the developing embryo has a heart shape due to the presence of cotyledons. (c) In the third stage, the growing embryo runs out of room and starts to bend. (d) Eventually, it completely fills the seed. (credit: modification of work by Robert R. Wise; scale-bar data from Matt Russell)