Blood glucose levels vary widely over the course of a day as periods of food consumption alternate with periods of fasting. Insulin and glucagon are the two hormones primarily responsible for maintaining homeostasis of blood glucose levels. Additional regulation is mediated by the thyroid hormones.

Cells of the body require nutrients in order to function, and these nutrients are obtained through feeding. In order to manage nutrient intake, storing excess intake and utilizing reserves when necessary, the body uses hormones to moderate energy stores. Insulin is produced by the beta cells of the pancreas, which are stimulated to release insulin as blood glucose levels rise (for example, after a meal is consumed). Insulin lowers blood glucose levels by enhancing the rate of glucose uptake and utilization by target cells, which use glucose for ATP production. It also stimulates the liver to convert glucose to glycogen, which is then stored by cells for later use. Insulin also increases glucose transport into certain cells, such as muscle cells and the liver. This results from an insulin-mediated increase in the number of glucose transporter proteins in cell membranes, which remove glucose from circulation by facilitated diffusion. As insulin binds to its target cell via insulin receptors and signal transduction, it triggers the cell to incorporate glucose transport proteins into its membrane. This allows glucose to enter the cell, where it can be used as an energy source. However, this does not occur in all cells: some cells, including those in the kidneys and brain, can access glucose without the use of insulin. Insulin also stimulates the conversion of glucose to fat in adipocytes and the synthesis of proteins. These actions mediated by insulin cause blood glucose concentrations to fall, called a hypoglycemic “low sugar” effect, which inhibits further insulin release from beta cells through a negative feedback loop.

This animation describe the role of insulin and the pancreas in diabetes. 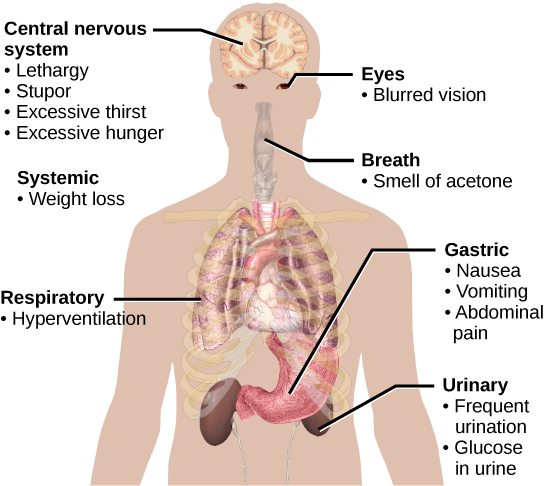 Figure 1. The main symptoms of diabetes are shown. (credit: modification of work by Mikael Häggström)

Impaired insulin function can lead to a condition called diabetes mellitus, the main symptoms of which are illustrated in Figure 1. This can be caused by low levels of insulin production by the beta cells of the pancreas, or by reduced sensitivity of tissue cells to insulin. This prevents glucose from being absorbed by cells, causing high levels of blood glucose, or hyperglycemia (high sugar). High blood glucose levels make it difficult for the kidneys to recover all the glucose from nascent urine, resulting in glucose being lost in urine. High glucose levels also result in less water being reabsorbed by the kidneys, causing high amounts of urine to be produced; this may result in dehydration. Over time, high blood glucose levels can cause nerve damage to the eyes and peripheral body tissues, as well as damage to the kidneys and cardiovascular system. Oversecretion of insulin can cause hypoglycemia, low blood glucose levels. This causes insufficient glucose availability to cells, often leading to muscle weakness, and can sometimes cause unconsciousness or death if left untreated.

When blood glucose levels decline below normal levels, for example between meals or when glucose is utilized rapidly during exercise, the hormone glucagon is released from the alpha cells of the pancreas. Glucagon raises blood glucose levels, eliciting what is called a hyperglycemic effect, by stimulating the breakdown of glycogen to glucose in skeletal muscle cells and liver cells in a process called glycogenolysis. Glucose can then be utilized as energy by muscle cells and released into circulation by the liver cells. Glucagon also stimulates absorption of amino acids from the blood by the liver, which then converts them to glucose. This process of glucose synthesis is called gluconeogenesis. Glucagon also stimulates adipose cells to release fatty acids into the blood. These actions mediated by glucagon result in an increase in blood glucose levels to normal homeostatic levels. Rising blood glucose levels inhibit further glucagon release by the pancreas via a negative feedback mechanism. In this way, insulin and glucagon work together to maintain homeostatic glucose levels, as shown in Figure 2. 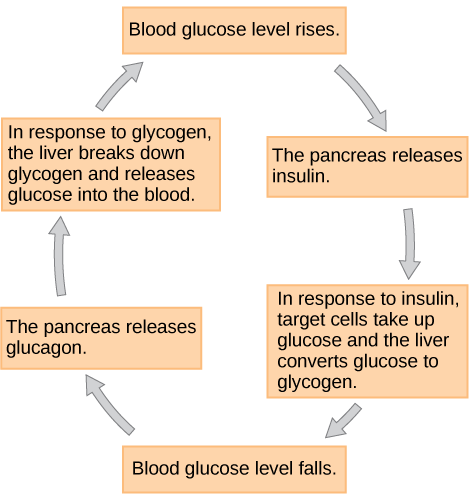 Pancreatic tumors may cause excess secretion of glucagon. Type I diabetes results from the failure of the pancreas to produce insulin. Which of the following statement about these two conditions is true?

Show Answer
Statement b is true.

The basal metabolic rate, which is the amount of calories required by the body at rest, is determined by two hormones produced by the thyroid gland: thyroxine, also known as tetraiodothyronine or T4, and triiodothyronine, also known as T3. These hormones affect nearly every cell in the body except for the adult brain, uterus, testes, blood cells, and spleen. They are transported across the plasma membrane of target cells and bind to receptors on the mitochondria resulting in increased ATP production. In the nucleus, T3 and T4activate genes involved in energy production and glucose oxidation. This results in increased rates of metabolism and body heat production, which is known as the hormone’s calorigenic effect.

T3 and T4 release from the thyroid gland is stimulated by thyroid-stimulating hormone (TSH), which is produced by the anterior pituitary. TSH binding at the receptors of the follicle of the thyroid triggers the production of T3 and T4 from a glycoprotein called thyroglobulin. Thyroglobulin is present in the follicles of the thyroid, and is converted into thyroid hormones with the addition of iodine. Iodine is formed from iodide ions that are actively transported into the thyroid follicle from the bloodstream. A peroxidase enzyme then attaches the iodine to the tyrosine amino acid found in thyroglobulin. T3 has three iodine ions attached, while T4 has four iodine ions attached. T3 and T4 are then released into the bloodstream, with T4 being released in much greater amounts than T3. As T3is more active than T4 and is responsible for most of the effects of thyroid hormones, tissues of the body convert T4 to T3 by the removal of an iodine ion. Most of the released T3 and T4 becomes attached to transport proteins in the bloodstream and is unable to cross the plasma membrane of cells. These protein-bound molecules are only released when blood levels of the unattached hormone begin to decline. In this way, a week’s worth of reserve hormone is maintained in the blood. Increased T3 and T4 levels in the blood inhibit the release of TSH, which results in lower T3 and T4 release from the thyroid.

The follicular cells of the thyroid require iodides (anions of iodine) in order to synthesize T3 and T4. Iodides obtained from the diet are actively transported into follicle cells resulting in a concentration that is approximately 30 times higher than in blood. The typical diet in North America provides more iodine than required due to the addition of iodide to table salt. Inadequate iodine intake, which occurs in many developing countries, results in an inability to synthesize T3 and T4 hormones. The thyroid gland enlarges in a condition called goiter, which is caused by overproduction of TSH without the formation of thyroid hormone. Thyroglobulin is contained in a fluid called colloid, and TSH stimulation results in higher levels of colloid accumulation in the thyroid. In the absence of iodine, this is not converted to thyroid hormone, and colloid begins to accumulate more and more in the thyroid gland, leading to goiter.

In Summary: Hormonal Regulation of Metabolism

Insulin is produced by the pancreas in response to rising blood glucose levels and allows cells to utilize blood glucose and store excess glucose for later use. Diabetes mellitus is caused by reduced insulin activity and causes high blood glucose levels, or hyperglycemia. Glucagon is released by the pancreas in response to low blood glucose levels and stimulates the breakdown of glycogen into glucose, which can be used by the body. The body’s basal metabolic rate is controlled by the thyroid hormones thyroxine (T4) and triiodothyronine (T3). The anterior pituitary produces thyroid stimulating hormone (TSH), which controls the release of T3 and T4 from the thyroid gland. Iodine is necessary in the production of thyroid hormone, and the lack of iodine can lead to a condition called goiter.