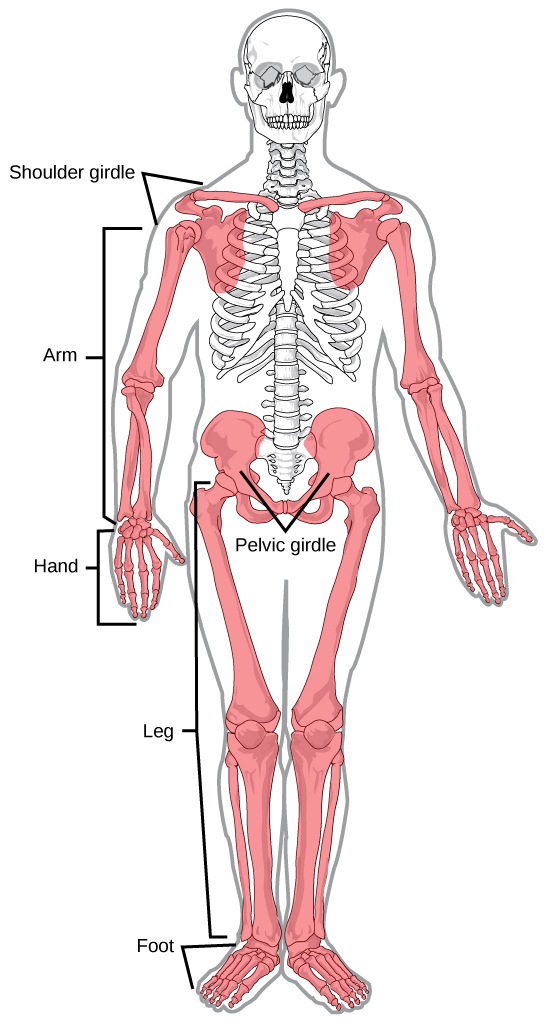 Figure 1. The appendicular skeleton is composed of the bones of the pectoral limbs (arm, forearm, hand), the pelvic limbs (thigh, leg, foot), the pectoral girdle, and the pelvic girdle. (credit: modification of work by Mariana Ruiz Villareal)

The pectoral girdle bones provide the points of attachment of the upper limbs to the axial skeleton. The human pectoral girdle consists of the clavicle (or collarbone) in the anterior, and the scapula (or shoulder blades) in the posterior (Figure 2).

Figure 2. (a) The pectoral girdle in primates consists of the clavicles and scapulae. (b) The posterior view reveals the spine of the scapula to which muscle attaches.

The clavicles are S-shaped bones that position the arms on the body. The clavicles lie horizontally across the front of the thorax (chest) just above the first rib. These bones are fairly fragile and are susceptible to fractures. For example, a fall with the arms outstretched causes the force to be transmitted to the clavicles, which can break if the force is excessive. The clavicle articulates with the sternum and the scapula.

The scapulae are flat, triangular bones that are located at the back of the pectoral girdle. They support the muscles crossing the shoulder joint. A ridge, called the spine, runs across the back of the scapula and can easily be felt through the skin (Figure 2). The spine of the scapula is a good example of a bony protrusion that facilitates a broad area of attachment for muscles to bone. 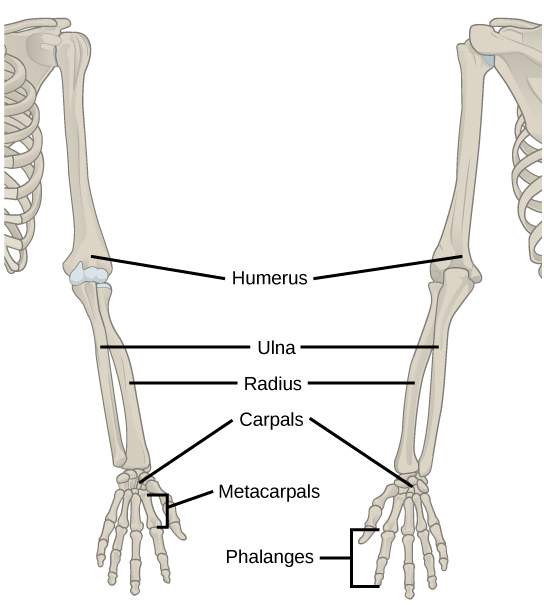 Figure 3. The upper limb consists of the humerus of the upper arm, the radius and ulna of the forearm, eight bones of the carpus, five bones of the metacarpus, and 14 bones of the phalanges.

The upper limb contains 30 bones in three regions: the arm (shoulder to elbow), the forearm (ulna and radius), and the wrist and hand (Figure 3).

An articulation is any place at which two bones are joined. The humerus is the largest and longest bone of the upper limb and the only bone of the arm. It articulates with the scapula at the shoulder and with the forearm at the elbow. The forearm extends from the elbow to the wrist and consists of two bones: the ulna and the radius. The radius is located along the lateral (thumb) side of the forearm and articulates with the humerus at the elbow. The ulna is located on the medial aspect (pinky-finger side) of the forearm. It is longer than the radius. The ulna articulates with the humerus at the elbow. The radius and ulna also articulate with the carpal bones and with each other, which in vertebrates enables a variable degree of rotation of the carpus with respect to the long axis of the limb. The hand includes the eight bones of the carpus (wrist), the five bones of the metacarpus (palm), and the 14 bones of the phalanges(digits). Each digit consists of three phalanges, except for the thumb, when present, which has only two.

The pelvic girdle attaches to the lower limbs of the axial skeleton. Because it is responsible for bearing the weight of the body and for locomotion, the pelvic girdle is securely attached to the axial skeleton by strong ligaments. It also has deep sockets with robust ligaments to securely attach the femur to the body. The pelvic girdle is further strengthened by two large hip bones. In adults, the hip bones, or coxal bones, are formed by the fusion of three pairs of bones: the ilium, ischium, and pubis. The pelvis joins together in the anterior of the body at a joint called the pubic symphysis and with the bones of the sacrum at the posterior of the body.

The female pelvis is slightly different from the male pelvis. Over generations of evolution, females with a wider pubic angle and larger diameter pelvic canal reproduced more successfully. Therefore, their offspring also had pelvic anatomy that enabled successful childbirth (Figure 4).

Figure 4. To adapt to reproductive fitness, the (a) female pelvis is lighter, wider, shallower, and has a broader angle between the pubic bones than (b) the male pelvis. 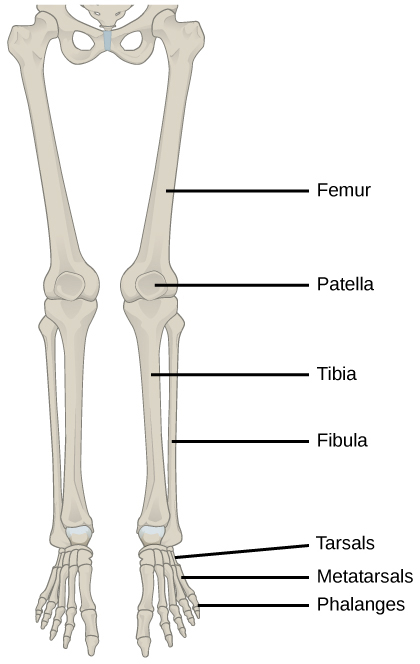 The femur, or thighbone, is the longest, heaviest, and strongest bone in the body. The femur and pelvis form the hip joint at the proximal end. At the distal end, the femur, tibia, and patella form the knee joint. The patella, or kneecap, is a triangular bone that lies anterior to the knee joint. The patella is embedded in the tendon of the femoral extensors (quadriceps). It improves knee extension by reducing friction. The tibia, or shinbone, is a large bone of the leg that is located directly below the knee. The tibia articulates with the femur at its proximal end, with the fibula and the tarsal bones at its distal end. It is the second largest bone in the human body and is responsible for transmitting the weight of the body from the femur to the foot. The fibula, or calf bone, parallels and articulates with the tibia. It does not articulate with the femur and does not bear weight. The fibula acts as a site for muscle attachment and forms the lateral part of the ankle joint.

The tarsals are the seven bones of the ankle. The ankle transmits the weight of the body from the tibia and the fibula to the foot.

The metatarsals are the five bones of the foot. The phalanges are the 14 bones of the toes. Each toe consists of three phalanges, except for the big toe that has only two (Figure 5).

Variations exist in other species; for example, the horse’s metacarpals and metatarsals are oriented vertically and do not make contact with the substrate.

Evolution of Body Design for Locomotion on Land

The transition of vertebrates onto land required a number of changes in body design, as movement on land presents a number of challenges for animals that are adapted to movement in water. The buoyancy of water provides a certain amount of lift, and a common form of movement by fish is lateral undulations of the entire body. This back and forth movement pushes the body against the water, creating forward movement. In most fish, the muscles of paired fins attach to girdles within the body, allowing for some control of locomotion. As certain fish began moving onto land, they retained their lateral undulation form of locomotion (anguilliform). However, instead of pushing against water, their fins or flippers became points of contact with the ground, around which they rotated their bodies.

The effect of gravity and the lack of buoyancy on land meant that body weight was suspended on the limbs, leading to increased strengthening and ossification of the limbs. The effect of gravity also required changes to the axial skeleton. Lateral undulations of land animal vertebral columns cause torsional strain. A firmer, more ossified vertebral column became common in terrestrial tetrapods because it reduces strain while providing the strength needed to support the body’s weight. In later tetrapods, the vertebrae began allowing for vertical motion rather than lateral flexion. Another change in the axial skeleton was the loss of a direct attachment between the pectoral girdle and the head. This reduced the jarring to the head caused by the impact of the limbs on the ground. The vertebrae of the neck also evolved to allow movement of the head independently of the body.

The appendicular skeleton of land animals is also different from aquatic animals. The shoulders attach to the pectoral girdle through muscles and connective tissue, thus reducing the jarring of the skull. Because of a lateral undulating vertebral column, in early tetrapods, the limbs were splayed out to the side and movement occurred by performing “push-ups.” The vertebrae of these animals had to move side-to-side in a similar manner to fish and reptiles. This type of motion requires large muscles to move the limbs toward the midline; it was almost like walking while doing push-ups, and it is not an efficient use of energy. Later tetrapods have their limbs placed under their bodies, so that each stride requires less force to move forward. This resulted in decreased adductor muscle size and an increased range of motion of the scapulae. This also restricts movement primarily to one plane, creating forward motion rather than moving the limbs upward as well as forward. The femur and humerus were also rotated, so that the ends of the limbs and digits were pointed forward, in the direction of motion, rather than out to the side. By placement underneath the body, limbs can swing forward like a pendulum to produce a stride that is more efficient for moving over land.