Animals have evolved different types of digestive systems to aid in the digestion of the different foods they consume. The simplest example is that of a gastrovascular cavity and is found in organisms with only one opening for digestion. Platyhelminthes (flatworms), Ctenophora (comb jellies), and Cnidaria (coral, jelly fish, and sea anemones) use this type of digestion. Gastrovascular cavities, as shown in Figure 1a, are typically a blind tube or cavity with only one opening, the “mouth”, which also serves as an “anus”. Ingested material enters the mouth and passes through a hollow, tubular cavity. Cells within the cavity secrete digestive enzymes that break down the food. The food particles are engulfed by the cells lining the gastrovascular cavity.

The alimentary canal, shown in Figure 1b, is a more advanced system: it consists of one tube with a mouth at one end and an anus at the other. Earthworms are an example of an animal with an alimentary canal. Once the food is ingested through the mouth, it passes through the esophagus and is stored in an organ called the crop; then it passes into the gizzard where it is churned and digested. From the gizzard, the food passes through the intestine, the nutrients are absorbed, and the waste is eliminated as feces, called castings, through the anus. 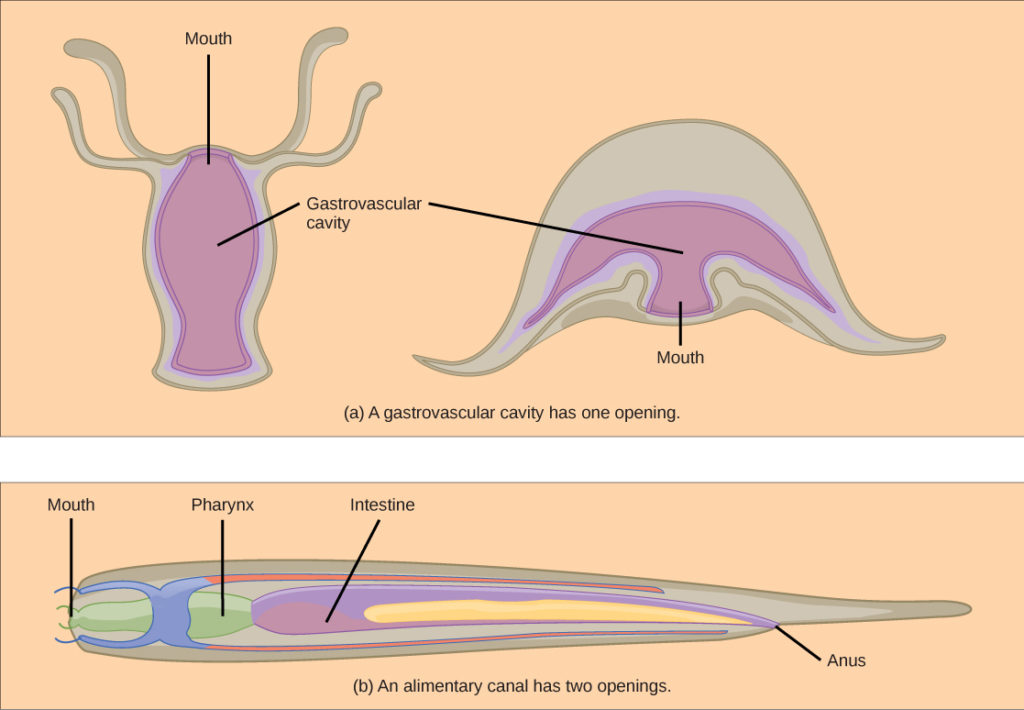 Figure 1. (a) A gastrovascular cavity has a single opening through which food is ingested and waste is excreted, as shown in this hydra and in this jellyfish medusa. (b) An alimentary canal has two openings: a mouth for ingesting food, and an anus for eliminating waste, as shown in this nematode.

Vertebrates have evolved more complex digestive systems to adapt to their dietary needs. Some animals have a single stomach, while others have multi-chambered stomachs. Birds have developed a digestive system adapted to eating unmasticated food.

As the word monogastric suggests, this type of digestive system consists of one (“mono”) stomach chamber (“gastric”). Humans and many animals have a monogastric digestive system as illustrated in Figure 2a and 2b. The process of digestion begins with the mouth and the intake of food. The teeth play an important role in masticating (chewing) or physically breaking down food into smaller particles. The enzymes present in saliva also begin to chemically break down food. The esophagus is a long tube that connects the mouth to the stomach. Using peristalsis, or wave-like smooth muscle contractions, the muscles of the esophagus push the food towards the stomach. In order to speed up the actions of enzymes in the stomach, the stomach is an extremely acidic environment, with a pH between 1.5 and 2.5. The gastric juices, which include enzymes in the stomach, act on the food particles and continue the process of digestion. Further breakdown of food takes place in the small intestine where enzymes produced by the liver, the small intestine, and the pancreas continue the process of digestion. The nutrients are absorbed into the blood stream across the epithelial cells lining the walls of the small intestines. The waste material travels on to the large intestine where water is absorbed and the drier waste material is compacted into feces; it is stored until it is excreted through the rectum. 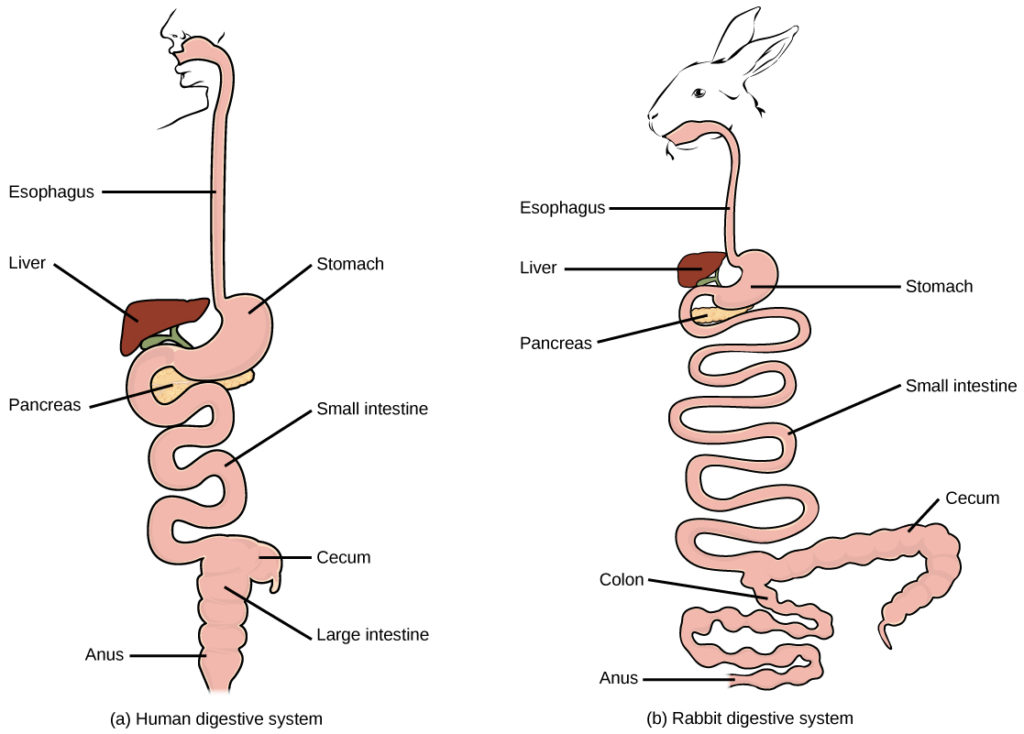 Figure 2. (a) Humans and herbivores, such as the (b) rabbit, have a monogastric digestive system. However, in the rabbit the small intestine and cecum are enlarged to allow more time to digest plant material. The enlarged organ provides more surface area for absorption of nutrients. Rabbits digest their food twice: the first time food passes through the digestive system, it collects in the cecum, and then it passes as soft feces called cecotrophes. The rabbit re-ingests these cecotrophes to further digest them.

Birds face special challenges when it comes to obtaining nutrition from food. They do not have teeth and so their digestive system, shown in Figure 3, must be able to process un-masticated food. Birds have evolved a variety of beak types that reflect the vast variety in their diet, ranging from seeds and insects to fruits and nuts. Because most birds fly, their metabolic rates are high in order to efficiently process food and keep their body weight low. The stomach of birds has two chambers: the proventriculus, where gastric juices are produced to digest the food before it enters the stomach, and the gizzard, where the food is stored, soaked, and mechanically ground. The undigested material forms food pellets that are sometimes regurgitated. Most of the chemical digestion and absorption happens in the intestine and the waste is excreted through the cloaca. 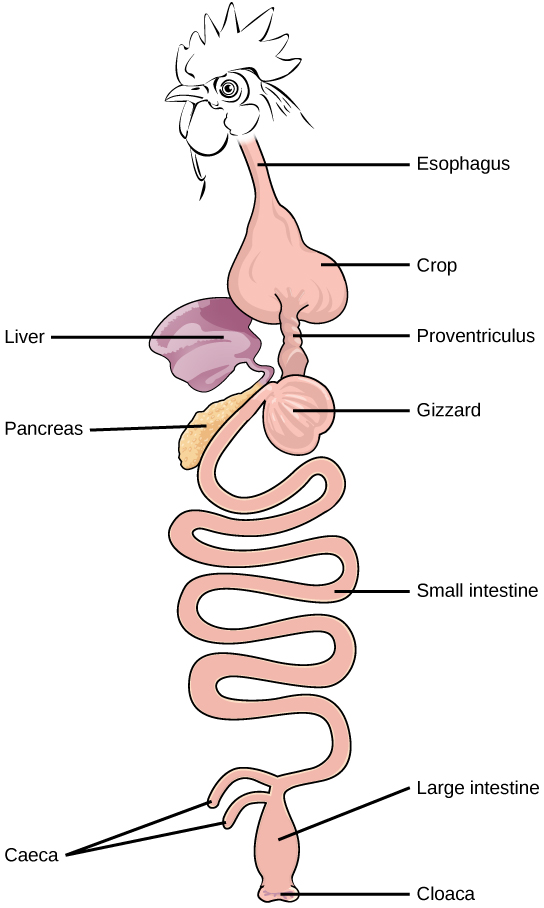 Figure 3. The avian esophagus has a pouch, called a crop, which stores food.

In the avian digestive system, food passes from the crop to the first of two stomachs, called the proventriculus, which contains digestive juices that break down food. From the proventriculus, the food enters the second stomach, called the gizzard, which grinds food. Some birds swallow stones or grit, which are stored in the gizzard, to aid the grinding process. Birds do not have separate openings to excrete urine and feces. Instead, uric acid from the kidneys is secreted into the large intestine and combined with waste from the digestive process. This waste is excreted through an opening called the cloaca.

Birds have a highly efficient, simplified digestive system. Recent fossil evidence has shown that the evolutionary divergence of birds from other land animals was characterized by streamlining and simplifying the digestive system. Unlike many other animals, birds do not have teeth to chew their food. In place of lips, they have sharp pointy beaks. The horny beak, lack of jaws, and the smaller tongue of the birds can be traced back to their dinosaur ancestors. The emergence of these changes seems to coincide with the inclusion of seeds in the bird diet. Seed-eating birds have beaks that are shaped for grabbing seeds and the two-compartment stomach allows for delegation of tasks. Since birds need to remain light in order to fly, their metabolic rates are very high, which means they digest their food very quickly and need to eat often. Contrast this with the ruminants, where the digestion of plant matter takes a very long time.

Ruminants are mainly herbivores like cows, sheep, and goats, whose entire diet consists of eating large amounts of roughage or fiber. They have evolved digestive systems that help them digest vast amounts of cellulose. An interesting feature of the ruminants’ mouth is that they do not have upper incisor teeth. They use their lower teeth, tongue and lips to tear and chew their food. From the mouth, the food travels to the esophagus and on to the stomach.

To help digest the large amount of plant material, the stomach of the ruminants is a multi-chambered organ, as illustrated in Figure 4. The four compartments of the stomach are called the rumen, reticulum, omasum, and abomasum. These chambers contain many microbes that break down cellulose and ferment ingested food. The abomasum is the “true” stomach and is the equivalent of the monogastric stomach chamber where gastric juices are secreted. The four-compartment gastric chamber provides larger space and the microbial support necessary to digest plant material in ruminants. The fermentation process produces large amounts of gas in the stomach chamber, which must be eliminated. As in other animals, the small intestine plays an important role in nutrient absorption, and the large intestine helps in the elimination of waste. 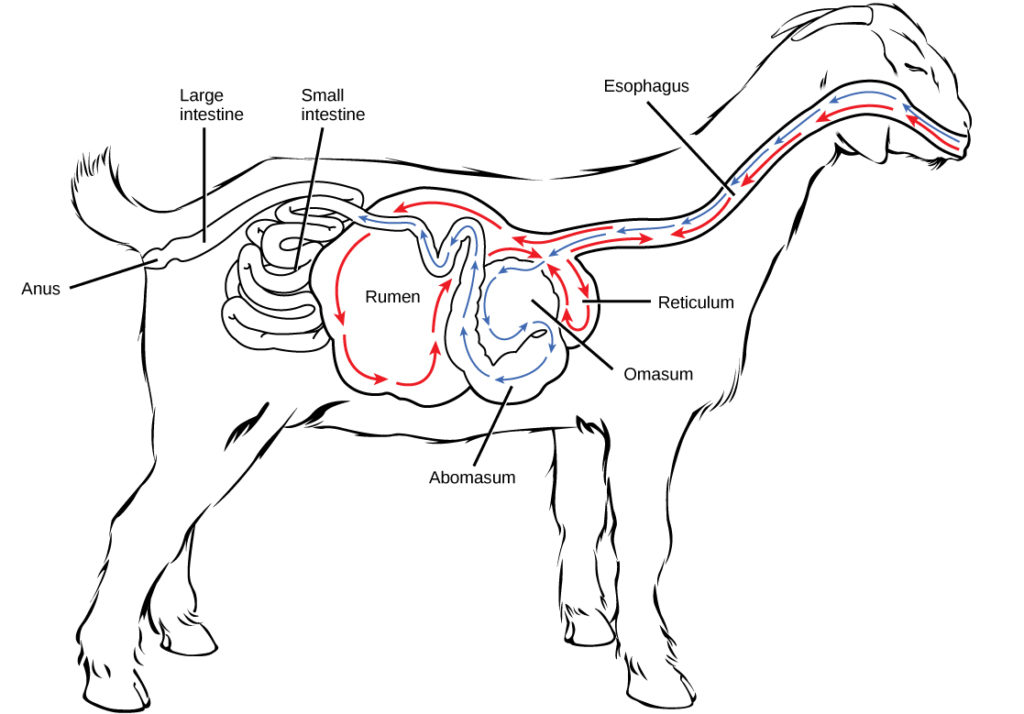 Figure 4. Ruminant animals, such as goats and cows, have four stomachs. The first two stomachs, the rumen and the reticulum, contain prokaryotes and protists that are able to digest cellulose fiber. The ruminant regurgitates cud from the reticulum, chews it, and swallows it into a third stomach, the omasum, which removes water. The cud then passes onto the fourth stomach, the abomasum, where it is digested by enzymes produced by the ruminant.

Some animals, such as camels and alpacas, are pseudo-ruminants. They eat a lot of plant material and roughage. Digesting plant material is not easy because plant cell walls contain the polymeric sugar molecule cellulose. The digestive enzymes of these animals cannot break down cellulose, but microorganisms present in the digestive system can. Therefore, the digestive system must be able to handle large amounts of roughage and break down the cellulose. Pseudo-ruminants have a three-chamber stomach in the digestive system. However, their cecum—a pouched organ at the beginning of the large intestine containing many microorganisms that are necessary for the digestion of plant materials—is large and is the site where the roughage is fermented and digested. These animals do not have a rumen but have an omasum, abomasum, and reticulum.