Parts of the Digestive System

The vertebrate digestive system is designed to facilitate the transformation of food matter into the nutrient components that sustain organisms.

The oral cavity, or mouth, is the point of entry of food into the digestive system, illustrated in Figure 1. The food consumed is broken into smaller particles by mastication, the chewing action of the teeth. All mammals have teeth and can chew their food. 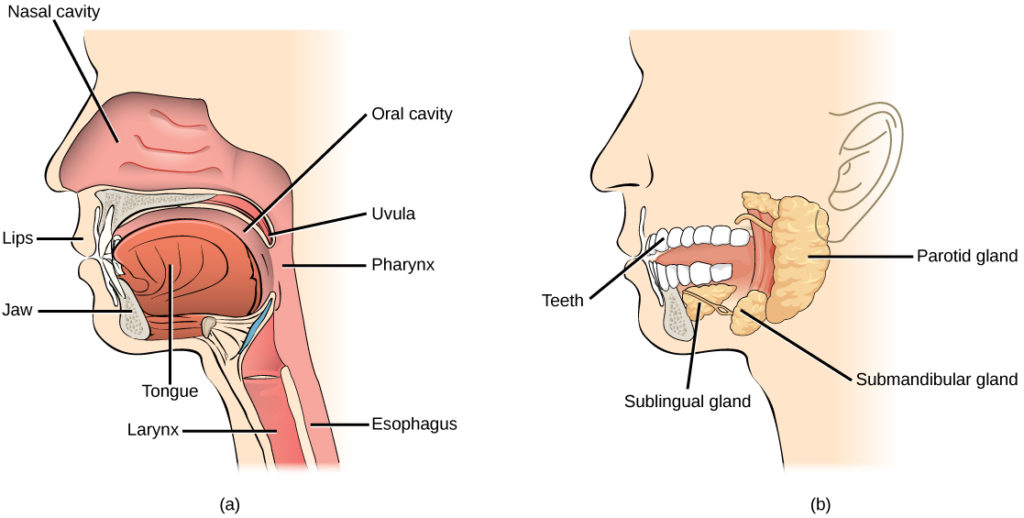 Figure 1. Digestion of food begins in the (a) oral cavity. Food is masticated by teeth and moistened by saliva secreted from the (b) salivary glands. Enzymes in the saliva begin to digest starches and fats. With the help of the tongue, the resulting bolus is moved into the esophagus by swallowing. (credit: modification of work by the National Cancer Institute)

The extensive chemical process of digestion begins in the mouth. As food is being chewed, saliva, produced by the salivary glands, mixes with the food. Saliva is a watery substance produced in the mouths of many animals. There are three major glands that secrete saliva—the parotid, the submandibular, and the sublingual. Saliva contains mucus that moistens food and buffers the pH of the food. Saliva also contains immunoglobulins and lysozymes, which have antibacterial action to reduce tooth decay by inhibiting growth of some bacteria.

Saliva also contains an enzyme called salivary amylase that begins the process of converting starches in the food into a disaccharide called maltose. Another enzyme called lipase is produced by the cells in the tongue. Lipases are a class of enzymes that can break down triglycerides. The lingual lipase begins the breakdown of fat components in the food.

The chewing and wetting action provided by the teeth and saliva prepare the food into a mass called the bolus for swallowing. The tongue helps in swallowing—moving the bolus from the mouth into the pharynx. The pharynx opens to two passageways: the trachea, which leads to the lungs, and the esophagus, which leads to the stomach. The trachea has an opening called the glottis, which is covered by a cartilaginous flap called the epiglottis. When swallowing, the epiglottis closes the glottis and food passes into the esophagus and not the trachea. This arrangement allows food to be kept out of the trachea. 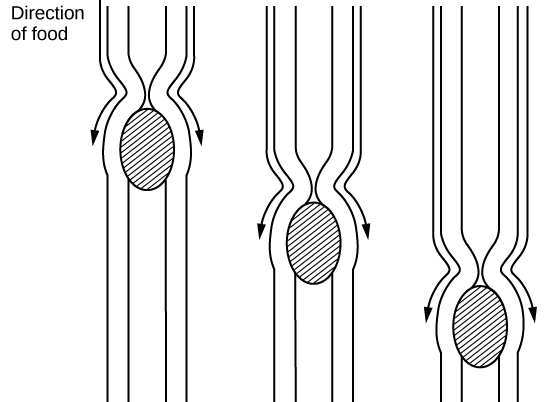 Figure 2. The esophagus transfers food from the mouth to the stomach through peristaltic movements.

A large part of digestion occurs in the stomach, shown in Figure 3. The stomach is a saclike organ that secretes gastric digestive juices. The pH in the stomach is between 1.5 and 2.5. This highly acidic environment is required for the chemical breakdown of food and the extraction of nutrients. When empty, the stomach is a rather small organ; however, it can expand to up to 20 times its resting size when filled with food. This characteristic is particularly useful for animals that need to eat when food is available.

Figure 3. The human stomach has an extremely acidic environment where most of the protein gets digested. (credit: modification of work by Mariana Ruiz Villareal)

Which of the following statements about the digestive system is false?

The stomach is also the major site for protein digestion in animals other than ruminants. Protein digestion is mediated by an enzyme called pepsin in the stomach chamber. Pepsin is secreted by the chief cells in the stomach in an inactive form called pepsinogen. Pepsin breaks peptide bonds and cleaves proteins into smaller polypeptides; it also helps activate more pepsinogen, starting a positive feedback mechanism that generates more pepsin. Another cell type—parietal cells—secrete hydrogen and chloride ions, which combine in the lumen to form hydrochloric acid, the primary acidic component of the stomach juices. Hydrochloric acid helps to convert the inactive pepsinogen to pepsin. The highly acidic environment also kills many microorganisms in the food and, combined with the action of the enzyme pepsin, results in the hydrolysis of protein in the food. Chemical digestion is facilitated by the churning action of the stomach. Contraction and relaxation of smooth muscles mixes the stomach contents about every 20 minutes. The partially digested food and gastric juice mixture is called chyme. Chyme passes from the stomach to the small intestine. Further protein digestion takes place in the small intestine. Gastric emptying occurs within two to six hours after a meal. Only a small amount of chyme is released into the small intestine at a time. The movement of chyme from the stomach into the small intestine is regulated by the pyloric sphincter.

When digesting protein and some fats, the stomach lining must be protected from getting digested by pepsin. There are two points to consider when describing how the stomach lining is protected. First, as previously mentioned, the enzyme pepsin is synthesized in the inactive form. This protects the chief cells, because pepsinogen does not have the same enzyme functionality of pepsin. Second, the stomach has a thick mucus lining that protects the underlying tissue from the action of the digestive juices. When this mucus lining is ruptured, ulcers can form in the stomach. Ulcers are open wounds in or on an organ caused by bacteria (Helicobacter pylori) when the mucus lining is ruptured and fails to reform.

Chyme moves from the stomach to the small intestine. The small intestine is the organ where the digestion of protein, fats, and carbohydrates is completed. The small intestine is a long tube-like organ with a highly folded surface containing finger-like projections called the villi. The apical surface of each villus has many microscopic projections called microvilli. These structures, illustrated in Figure 4, are lined with epithelial cells on the luminal side and allow for the nutrients to be absorbed from the digested food and absorbed into the blood stream on the other side. The villi and microvilli, with their many folds, increase the surface area of the intestine and increase absorption efficiency of the nutrients. Absorbed nutrients in the blood are carried into the hepatic portal vein, which leads to the liver. There, the liver regulates the distribution of nutrients to the rest of the body and removes toxic substances, including drugs, alcohol, and some pathogens.

Figure 4. Villi are folds on the small intestine lining that increase the surface area to facilitate the absorption of nutrients.

Which of the following statements about the small intestine is false?

The human small intestine is over 6m long and is divided into three parts: the duodenum, the jejunum, and the ileum. The “C-shaped,” fixed part of the small intestine is called the duodenum and is shown in Figure 3. The duodenum is separated from the stomach by the pyloric sphincter which opens to allow chyme to move from the stomach to the duodenum. In the duodenum, chyme is mixed with pancreatic juices in an alkaline solution rich in bicarbonate that neutralizes the acidity of chyme and acts as a buffer. Pancreatic juices also contain several digestive enzymes. Digestive juices from the pancreas, liver, and gallbladder, as well as from gland cells of the intestinal wall itself, enter the duodenum. Bile is produced in the liver and stored and concentrated in the gallbladder. Bile contains bile salts which emulsify lipids while the pancreas produces enzymes that catabolize starches, disaccharides, proteins, and fats. These digestive juices break down the food particles in the chyme into glucose, triglycerides, and amino acids. Some chemical digestion of food takes place in the duodenum. Absorption of fatty acids also takes place in the duodenum.

The second part of the small intestine is called the jejunum, shown in Figure 3. Here, hydrolysis of nutrients is continued while most of the carbohydrates and amino acids are absorbed through the intestinal lining. The bulk of chemical digestion and nutrient absorption occurs in the jejunum.

The ileum, also illustrated in Figure 3 is the last part of the small intestine and here the bile salts and vitamins are absorbed into blood stream. The undigested food is sent to the colon from the ileum via peristaltic movements of the muscle. The ileum ends and the large intestine begins at the ileocecal valve. The vermiform, “worm-like,” appendix is located at the ileocecal valve. The appendix of humans secretes no enzymes and has an insignificant role in immunity. 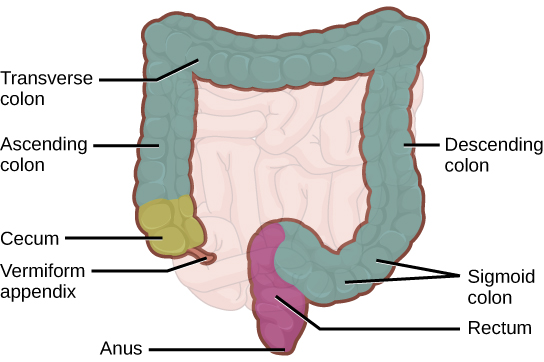 Figure 5. The large intestine reabsorbs water from undigested food and stores waste material until it is eliminated.

The large intestine, illustrated in Figure 5, reabsorbs the water from the undigested food material and processes the waste material. The human large intestine is much smaller in length compared to the small intestine but larger in diameter. It has three parts: the cecum, the colon, and the rectum. The cecum joins the ileum to the colon and is the receiving pouch for the waste matter. The colon is home to many bacteria or “intestinal flora” that aid in the digestive processes. The colon can be divided into four regions, the ascending colon, the transverse colon, the descending colon and the sigmoid colon. The main functions of the colon are to extract the water and mineral salts from undigested food, and to store waste material. Carnivorous mammals have a shorter large intestine compared to herbivorous mammals due to their diet.

The rectum is the terminal end of the large intestine, as shown in Figure 5. The primary role of the rectum is to store the feces until defecation. The feces are propelled using peristaltic movements during elimination. The anus is an opening at the far-end of the digestive tract and is the exit point for the waste material. Two sphincters between the rectum and anus control elimination: the inner sphincter is involuntary and the outer sphincter is voluntary.

The organs discussed above are the organs of the digestive tract through which food passes. Accessory organs are organs that add secretions (enzymes) that catabolize food into nutrients. Accessory organs include salivary glands, the liver, the pancreas, and the gallbladder. The liver, pancreas, and gallbladder are regulated by hormones in response to the food consumed.

The liver is the largest internal organ in humans and it plays a very important role in digestion of fats and detoxifying blood. The liver produces bile, a digestive juice that is required for the breakdown of fatty components of the food in the duodenum. The liver also processes the vitamins and fats and synthesizes many plasma proteins.

In Summary: Parts of the Digestive System

Many organs work together to digest food and absorb nutrients. The mouth is the point of ingestion and the location where both mechanical and chemical breakdown of food begins. Saliva contains an enzyme called amylase that breaks down carbohydrates. The food bolus travels through the esophagus by peristaltic movements to the stomach. The stomach has an extremely acidic environment. An enzyme called pepsin digests protein in the stomach. Further digestion and absorption take place in the small intestine. The large intestine reabsorbs water from the undigested food and stores waste until elimination.