Plants are multicellular eukaryotes with tissue systems made of various cell types that carry out specific functions. Plant tissue systems fall into one of two general types: meristematic tissue and permanent (or non-meristematic) tissue. Cells of the meristematic tissue are found in meristems, which are plant regions of continuous cell division and growth. Meristematic tissue cells are either undifferentiated or incompletely differentiated, and they continue to divide and contribute to the growth of the plant. In contrast, permanent tissue consists of plant cells that are no longer actively dividing.

Meristematic tissues consist of three types, based on their location in the plant. Apical meristems contain meristematic tissue located at the tips of stems and roots, which enable a plant to extend in length. Lateral meristems facilitate growth in thickness or girth in a maturing plant. Intercalary meristems occur only in monocots, at the bases of leaf blades and at nodes (the areas where leaves attach to a stem). This tissue enables the monocot leaf blade to increase in length from the leaf base; for example, it allows lawn grass leaves to elongate even after repeated mowing.

Meristems produce cells that quickly differentiate, or specialize, and become permanent tissue. Such cells take on specific roles and lose their ability to divide further. They differentiate into three main types: dermal, vascular, and ground tissue. Dermal tissue covers and protects the plant, and vascular tissue transports water, minerals, and sugars to different parts of the plant. Ground tissue serves as a site for photosynthesis, provides a supporting matrix for the vascular tissue, and helps to store water and sugars. 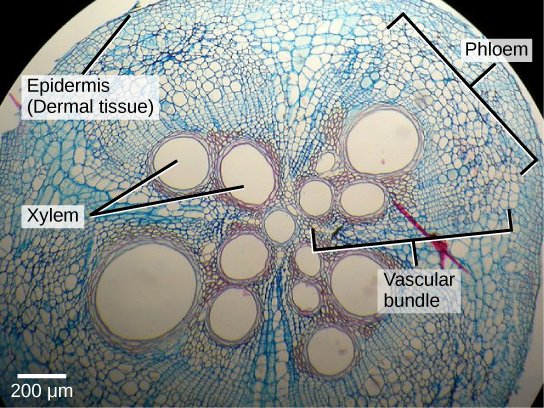 Figure 1. This light micrograph shows a cross section of a squash (Curcurbita maxima) stem. Each teardrop-shaped vascular bundle consists of large xylem vessels toward the inside and smaller phloem cells toward the outside. Xylem cells, which transport water and nutrients from the roots to the rest of the plant, are dead at functional maturity. Phloem cells, which transport sugars and other organic compounds from photosynthetic tissue to the rest of the plant, are living. The vascular bundles are encased in ground tissue and surrounded by dermal tissue. (credit: modification of work by “(biophotos)”/Flickr; scale-bar data from Matt Russell)

Secondary tissues are either simple (composed of similar cell types) or complex (composed of different cell types). Dermal tissue, for example, is a simple tissue that covers the outer surface of the plant and controls gas exchange. Vascular tissue is an example of a complex tissue, and is made of two specialized conducting tissues: xylem and phloem. Xylem tissue transports water and nutrients from the roots to different parts of the plant, and includes three different cell types: vessel elements and tracheids (both of which conduct water), and xylem parenchyma. Phloem tissue, which transports organic compounds from the site of photosynthesis to other parts of the plant, consists of four different cell types: sieve cells (which conduct photosynthates), companion cells, phloem parenchyma, and phloem fibers. Unlike xylem conducting cells, phloem conducting cells are alive at maturity. The xylem and phloem always lie adjacent to each other (Figure 1). In stems, the xylem and the phloem form a structure called a vascular bundle; in roots, this is termed the vascular stele or vascular cylinder.

Like the rest of the plant, the stem has three tissue systems: dermal, vascular, and ground tissue. Each is distinguished by characteristic cell types that perform specific tasks necessary for the plant’s growth and survival.

The dermal tissue of the stem consists primarily of epidermis, a single layer of cells covering and protecting the underlying tissue. Woody plants have a tough, waterproof outer layer of cork cells commonly known as bark, which further protects the plant from damage. Epidermal cells are the most numerous and least differentiated of the cells in the epidermis. The epidermis of a leaf also contains openings known as stomata, through which the exchange of gases takes place (Figure 2). Two cells, known as guard cells, surround each leaf stoma, controlling its opening and closing and thus regulating the uptake of carbon dioxide and the release of oxygen and water vapor. Trichomes are hair-like structures on the epidermal surface. They help to reduce transpiration (the loss of water by aboveground plant parts), increase solar reflectance, and store compounds that defend the leaves against predation by herbivores. 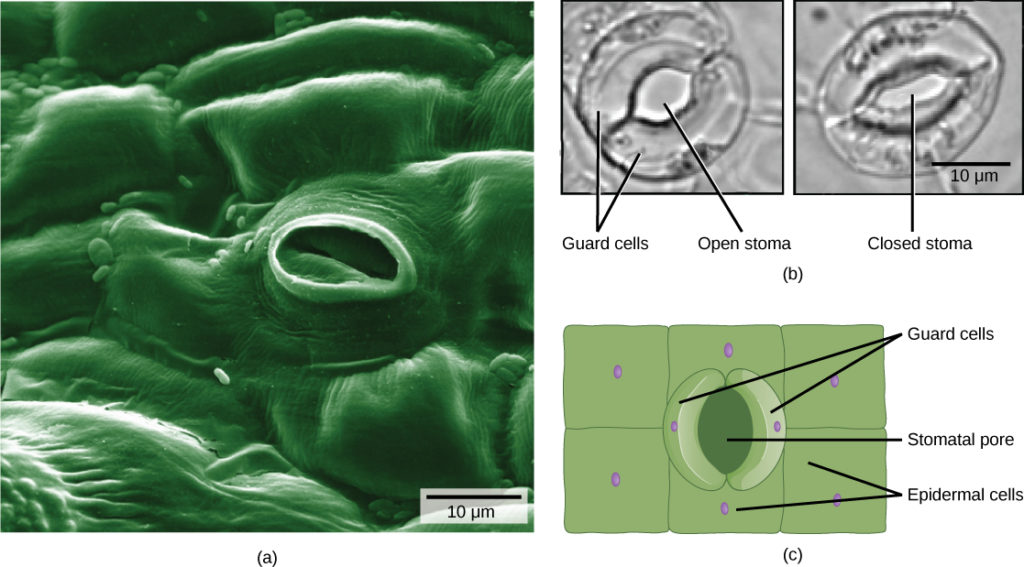 Figure 2. Openings called stomata (singular: stoma) allow a plant to take up carbon dioxide and release oxygen and water vapor. The (a) colorized scanning-electron micrograph shows a closed stoma of a dicot. Each stoma is flanked by two guard cells that regulate its (b) opening and closing. The (c) guard cells sit within the layer of epidermal cells (credit a: modification of work by Louisa Howard, Rippel Electron Microscope Facility, Dartmouth College; credit b: modification of work by June Kwak, University of Maryland; scale-bar data from Matt Russell)

Xylem tissue has three types of cells: xylem parenchyma, tracheids, and vessel elements. The latter two types conduct water and are dead at maturity. Tracheids are xylem cells with thick secondary cell walls that are lignified. Water moves from one tracheid to another through regions on the side walls known as pits, where secondary walls are absent. Vessel elements are xylem cells with thinner walls; they are shorter than tracheids. Each vessel element is connected to the next by means of a perforation plate at the end walls of the element. Water moves through the perforation plates to travel up the plant.

Like animals, plants contain cells with organelles in which specific metabolic activities take place. Unlike animals, however, plants use energy from sunlight to form sugars during photosynthesis. In addition, plant cells have cell walls, plastids, and a large central vacuole: structures that are not found in animal cells. Each of these cellular structures plays a specific role in plant structure and function.

Watch Botany Without Borders, a video produced by the Botanical Society of America about the importance of plants.

In plants, just as in animals, similar cells working together form a tissue. When different types of tissues work together to perform a unique function, they form an organ; organs working together form organ systems. Vascular plants have two distinct organ systems: a shoot system, and a root system. The shoot system consists of two portions: the vegetative (non-reproductive) parts of the plant, such as the leaves and the stems, and the reproductive parts of the plant, which include flowers and fruits. The shoot system generally grows above ground, where it absorbs the light needed for photosynthesis. The root system, which supports the plants and absorbs water and minerals, is usually underground. Figure 4 shows the organ systems of a typical plant. 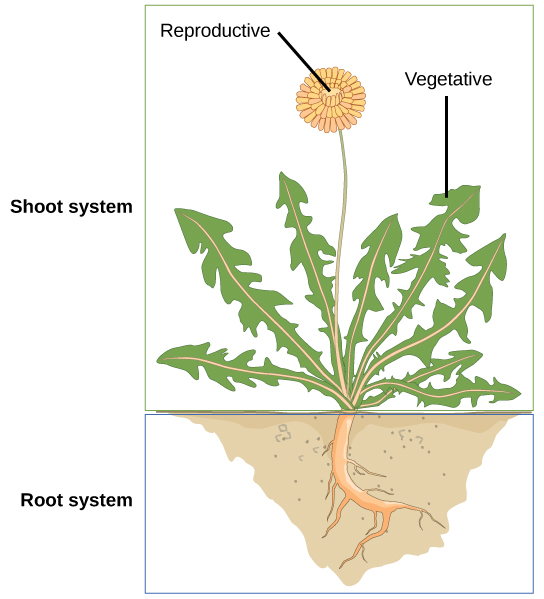 Figure 4. The shoot system of a plant consists of leaves, stems, flowers, and fruits. The root system anchors the plant while absorbing water and minerals from the soil.