The zygomycetes are a relatively small group of fungi belonging to the Phylum Zygomycota. They include the familiar bread mold, Rhizopus stolonifer, which rapidly propagates on the surfaces of breads, fruits, and vegetables. Most species are saprobes, living off decaying organic material; a few are parasites, particularly of insects. Zygomycetes play a considerable commercial role. For example, the metabolic products of some species of Rhizopus are intermediates in the synthesis of semi-synthetic steroid hormones.

Zygomycetes have a thallus of coenocytic hyphae in which the nuclei are haploid when the organism is in the vegetative stage. The fungi usually reproduce asexually by producing sporangiospores (Figure 1). 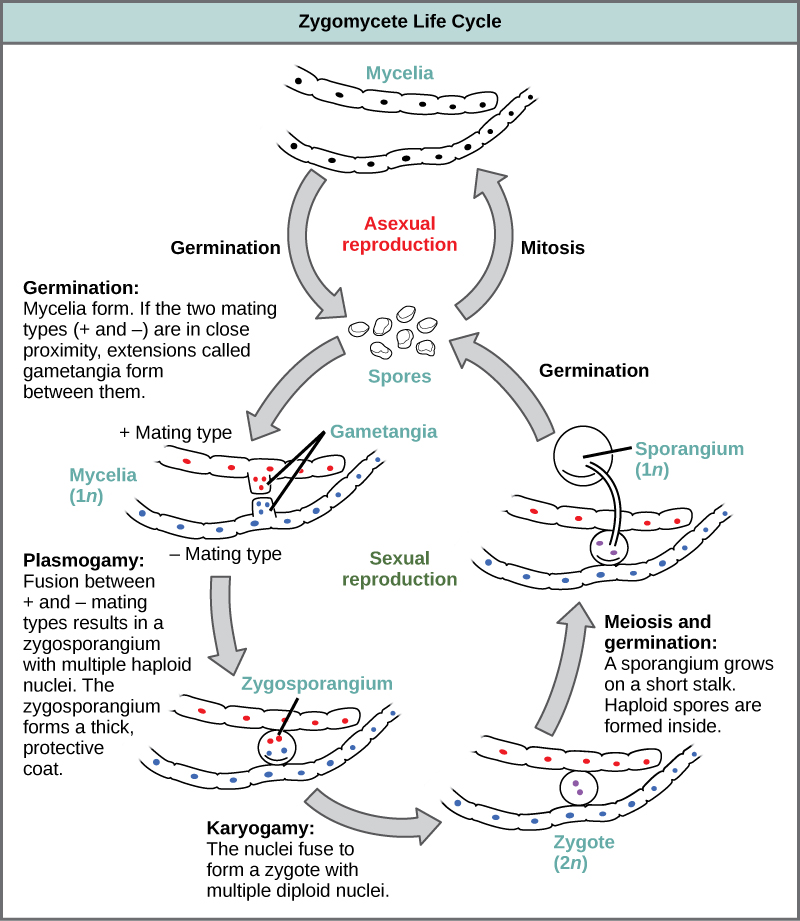 The black tips of bread mold are the swollen sporangia packed with black spores (Figure 2). When spores land on a suitable substrate, they germinate and produce a new mycelium. Sexual reproduction starts when environmental conditions become unfavorable. Two opposing mating strains (type + and type –) must be in close proximity for gametangia from the hyphae to be produced and fuse, leading to karyogamy. Each zygospore can contain several diploid nuclei. The developing diploid zygospores have thick coats that protect them from desiccation and other hazards. They may remain dormant until environmental conditions are favorable. When the zygospore germinates, it undergoes meiosis and produces haploid spores, which will, in turn, grow into a new organism. This form of sexual reproduction in fungi is called conjugation (although it differs markedly from conjugation in bacteria and protists), giving rise to the name “conjugated fungi”.

Figure 2. Asexual sporangia grow at the end of stalks, which appear as (a) white fuzz seen on this bread mold, Rhizopus stolonifer. The black tips (b) of bread mold are the spore-containing sporangia. (credit b: modification of work by “polandeze”/Flickr)