Let’s start with regular plurals: regular plural nouns use established patterns to indicate that there is more than one of a thing. As was mentioned earlier, we add the plural suffix –s or –es to most words (cats, zebras, classes, foxes, heroes). Remember that when words have a foreign origin (e.g., Latin, Greek, Spanish), we just add the plural suffix –s (tacos, avocados, maestros).

When a word ends in y and there is a consonant before y, we change the y to i and add –es. Thus sky becomes skies. However, if the y follows another vowel, you simply add an –s. (donkeys, alloys). When a word ends in –f or –fe, we change the f to v and add –es (calves, leaves). However, if there are two terminal fs, or if you still pronounce the f in the plural, you simply add an –s (cliffs, chiefs).

The first kind of irregular plural we’ll talk about is the no-change or base plural. In these words, the singular noun has the exact same form as the plural (sheep, fish, deer, moose). Most no-change plurals are types of animals.

The next type of irregular is the mid-word vowel change. This includes words like tooth, man, and mouse, which become teeth, men, and mice.

We also have the plural –en. In these words, –en is used as the plural ending instead of –s or -es.

Note: Brethren and sistren are antiquated terms that you’re unlikely to encounter or use; however, since these are the only four words in English that use this plural, all four have been included above.

The rules presented in the table above are almost always followed, but as a borrowed word becomes more popular in its usage, it can be adopted into regular pluralization. For example, formulas and appendixes are accepted words in formal situations. Also, in informal speech, cactuses and funguses are acceptable.

Note: Because of the word’s history, octopuses is preferred to octopi, but octopi is an accepted word.

Explanations of the answers

Look at each word in the table below. Decide whether the word is singular or plural. Then write the other version of the word and explain which rule the plural has used in its formation. For example:

There are many to categorize nouns: concrete vs. abstract nouns, common vs. proper nouns, count vs. noncount nouns, and compound vs. non-compound nouns. Let’s take a look at each of these classifications and see exactly what they each mean.

Concrete nouns are things you can touch, see, hear, or otherwise sense, like book, light, or warmth.

Abstract nouns, on the other hand, are (as you might expect) abstract concepts that can’t be perceived through the senses, such as time and love.

Common nouns are generic words, like tissue or watch. They are always lowercase (unless they begin a sentence). A proper noun, on the other hand, is the name of a specific person or thing, like the name John or the brand name Kleenex or Rolex. Proper nouns are always capitalized.

Note: This rule also applies to adjectives that are based on proper nouns:

However, if you’re talking about swiss cheese, pasteurized milk, and french fries, these adjectives are lowercase. They have a nonliteral meaning: the cheese isn’t really from Switzerland, Louie Pasteur didn’t treat the milk himself, and the fries aren’t really from France.

Count nouns are nouns which can be counted. Count nouns can be associated with a numerical value (three whales) in both its singular and plural forms (one fox, two foxes). In some cases, the number can be replaced by the words a, an or the (a fox, an owl, the squirrel).

If a noun cannot have a numerical value nor a plural form, it is called a non-count or mass noun. A person can give another person advice, but they cannot give three advices, because advice has no quantity.

Less or Fewer? Many or Much?

Read the following sentences. Choose the correct words to complete each sentence.

A compound noun is a noun that is the result of joining together two other words (such as tooth and paste making toothpaste). Let us take for an example, the legend of Bigfoot. 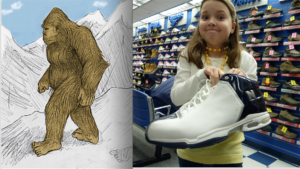 Figure 1. The famous cryptid Bigfoot on the left is a humanoid figure that apparently lives in Pacific Northwest forests, and is an example of a compound noun. On the right, you would have to have a big foot to wear that shoe.

A compound noun acts like one word, despite being a combination of two. Compound nouns can be classified as closed, hyphenated, or open. A closed compound takes the form of two words put together with no space such as daydream. A hyphenated compound includes two or more words joined by a hyphen such as dry-cleaning. An open compound is two words separated by a space but acting as one unit such as vacuum cleaner.

One common misconception is that compounds are hyphenated or open when one of the root words is longer than one syllable. However, it is important to remember that there are many open or hyphenated compound nouns that have of two single-syllable root words, such as six-pack and full moon.

Some compound nouns differ in writing style depending on who you ask, while others are recently developed, such as e-mail being shortened further to email.

Hyphens are often considered a squishy part on language (we’ll discuss this further in Hyphens and Dashes). Because of this, usage differs and often depends on the individual choice of the writer rather than on a hard-and-fast rule. This means open, hyphenated, and closed forms may be encountered for the same compound noun, such as the triplets container ship/container-ship/containership and particle board/particle-board/particleboard. If you’re ever in doubt whether a compound should be closed, hyphenated, or open, dictionaries are your best reference.

The word hand-me-down doesn’t have a distinct primary noun, so its plural is hand-me-downs.

Remember that compounds may be written in three different ways: the solid or closed form, the hyphenated form, and the open or spaced form.

Read the following sentences. Are the compound nouns spelled correctly? How would you create the plural form of each compound noun?