Actually, they’ve been buying supplies all year long because they keep running out, but here’s what the general ledger account looks like:

They don’t make a journal entry when they use a gallon or two of paint. They are only recording when they buy paint.

Someone has the job of counting the paint on hand at the end of each accounting period and putting a historical cost to it. In this case, it looks as if the company only produces financial statements at the end of the year because there are no adjustments to the supplies inventory during the year.

At the close of business on December 31, Sally, the supplies manager, counts the cans of paint and makes some kind of calculation about how much those cans cost. Let’s say her end of year count is 65 cans of paint, and the last purchase was that December 1 purchase of 120 cans at $10 each. So, ending paints supplies “inventory” is $650 in her professional opinion. She fills out a little worksheet that you designed and puts in on your desk on her way out to her New Year’s Eve party.

In January, as you are going through the unadjusted trial balance, line by line, one of the first asset accounts you come across after verifying that the checking account was accurate was supplies, which shows a balance of $7,700. You check Sally’s note to you and see the actual balance was $650.

This account needs to be adjusted, and a quick look at the ledger account reveals that none of the supplies used up during the year were recorded as expenses. That’s because this is a deferred expense. We pay for the supplies so we have them on hand when we need them, and then expense them as we use them. In this accounting system, however, we expense them when we get around to it, which is just before we create the financial statements.

You get out a scratch pad and do some math with some T accounts: 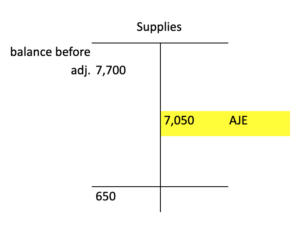 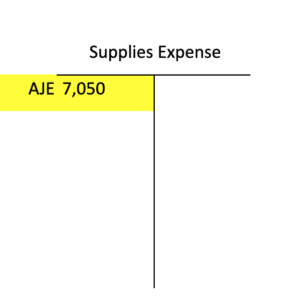 And from this analysis, you write the journal entry:

The credit to the asset account called supplies reduces the balance from $7,700 which is the total of everything we bought during the year to $650 which is what we had left at the end of the year. The difference of $7,050 is the cost of supplies we used up. We are inferring from the idea that if we bought it and it wasn’t on hand at the end of the year, then we used it up. Some of it could have been spilled, or even stolen. But in any case, the amount no longer in our possession is $7,050 and we are calling that an expense—a cost of doing business. The $650 that was left in the closet on December 31, was the historical cost of the asset on that date, and that’s what we will report on the balance sheet.

You can view the transcript for “Adjusting Entries for Prepaid Expenses (Financial Accounting Tutorial #20)” here (opens in new window).

Let’s move on to accruing expenses that haven’t been recorded yet. A common example of an accrued expense is wages employees earned (in this case in December) but haven’t been paid. 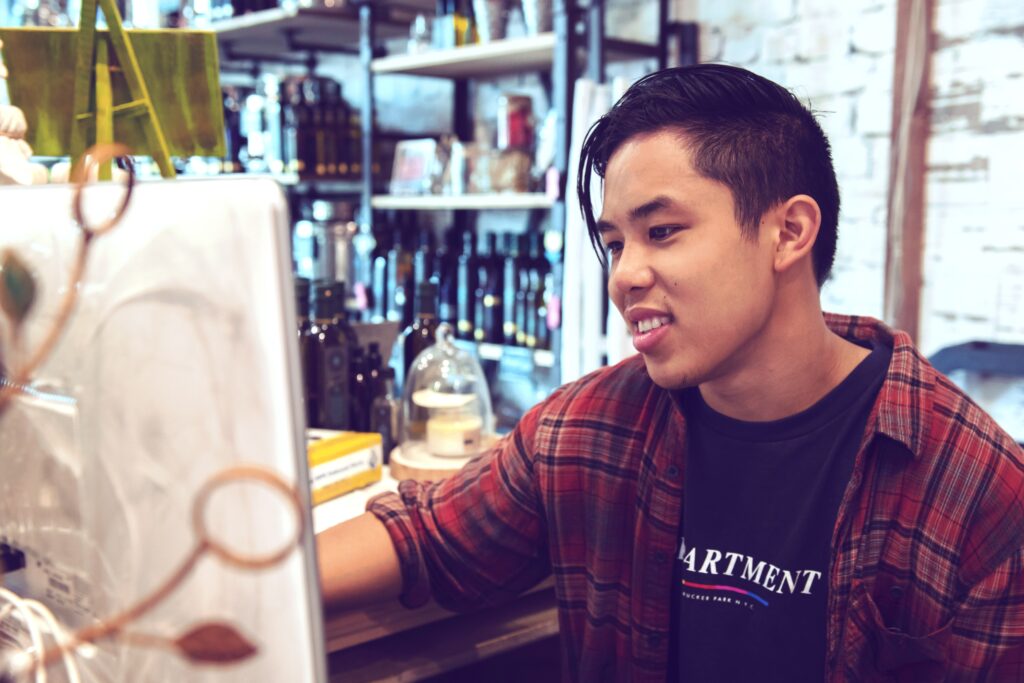 An accountant records unpaid salaries as a liability and an expense because the company has incurred an expense. The recording of the payment of employee salaries usually involves a debit to an expense account and a credit to cash. Unless a company pays salaries on the last day of the accounting period for a pay period ending on that date, it must make an adjusting entry to record any salaries incurred but not yet paid.

Let’s say that MacroAuto pays its employees on the 10th and the 25th of each month. The December 10 paycheck was for November 16–30, and the December 25 check was for December 1–15. This system means that employee earnings for December 16–31 will be paid on January 10 of the next year. As we are analyzing accounts, we know what the paycheck system will be, and so we know we have to add (accrue) wages for the end of December.

Fortunately, by the time we are doing this analysis, it’s already January 10 and so we know how much to accrue. Let’s say the amount of the January 10 payroll was $15,000. Let’s make a simple version of the actual entry because (a) it can get complicated and (b) this entry will be covered in more detail in the section on current liabilities.

Here’s a simple version of the journal entry:

We debit Wage Expense to record the December wages in December, even though they haven’t been paid as of that date, because they were incurred in December and match December revenue. Wages Payable is a liability—it shows that as of December 31 we had incurred an expense and hadn’t parted with the cash yet. It is a debt we owe workers.

You can view the transcript for “Adjusting Entries for Accrued Expenses (Financial Accounting Tutorial #19)” here (opens in new window).