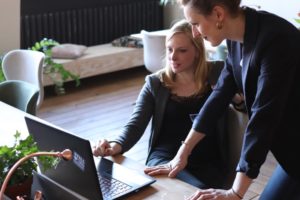 Of course, trust doesn’t just happen. According to Conley, trust is built and sustained by behavior that reflects four key elements: competence, integrity, care and dependability. Leaders who exhibit these behaviors cultivate a safe environment that prompts a high level of engagement and discretionary effort. Conley’s summary of trust-positive and negative behaviors is a good point of reference for building healthy and productive relationships at any level in an organization.

Trust is a particularly critical issue given changes in demographics and employee influence. The findings from global communications firm Edelman’s 2019 Trust Barometer survey[2] reflect a significant shift from trust in authority and social networks—for example, a person like me—to trust in local relationships and sphere of control. Key development: “my employer” has emerged as the most trusted institution. This is especially relevant for human resource management since it represents not only an opportunity, but an expectation. Globally, 75% of respondents indicated that they trust their employer “to do what is right,” versus a 57% vote of faith in NGOs, 56% in business in general and 47% in media. In presenting these results at the annual World Economic Forum in Davos in 2019, Edelman CEO Richard Edelman noted this sense of trust reflects a full-employment economy and the associated confidence that workers have the ability to influence corporate policy and procedures.[3] 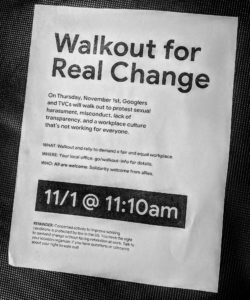 Google subsequently abandoned the policy of forced arbitration for any employer-employee disputes. What’s remarkable about these actions is the speed of organization and the effectiveness of the actions. For perspective, read the Cut article: “We’re the Organizers of the Google Walkout. Here Are Our Demands.”[5] In an article for CNBC.com, Technology Reporter Jillian D’Onfro observed that the “Google walkouts showed what the new tech resistance looks like, with lots of cues from union organizing.”[6] Specifically, Google employees tapped into the power of collective bargaining, using unionizing techniques and theatrics—for example, staging a San Francisco rally in a plaza dedicated to union leader Harry Bridges—without incurring the delays, compromises or political distractions of unionization or union representation. Indeed, one Google employee remarked that the speed of the walkout orchestration felt like “lightning striking.” D’Onfro also quoted Temple University professor Brishen Rogers, who specializes in the impact of technology on labor relations, saying “the numbers and level of coordination involved in the Google strike was unprecedented.”[7] To put the ethics-unionization connection in perspective, a study reported in the Journal of Financial Economics found that a one standard deviation increase in employees’ belief in their leaders integrity was associated with an increase in profitability and a decrease in the percentage of unionized workers.