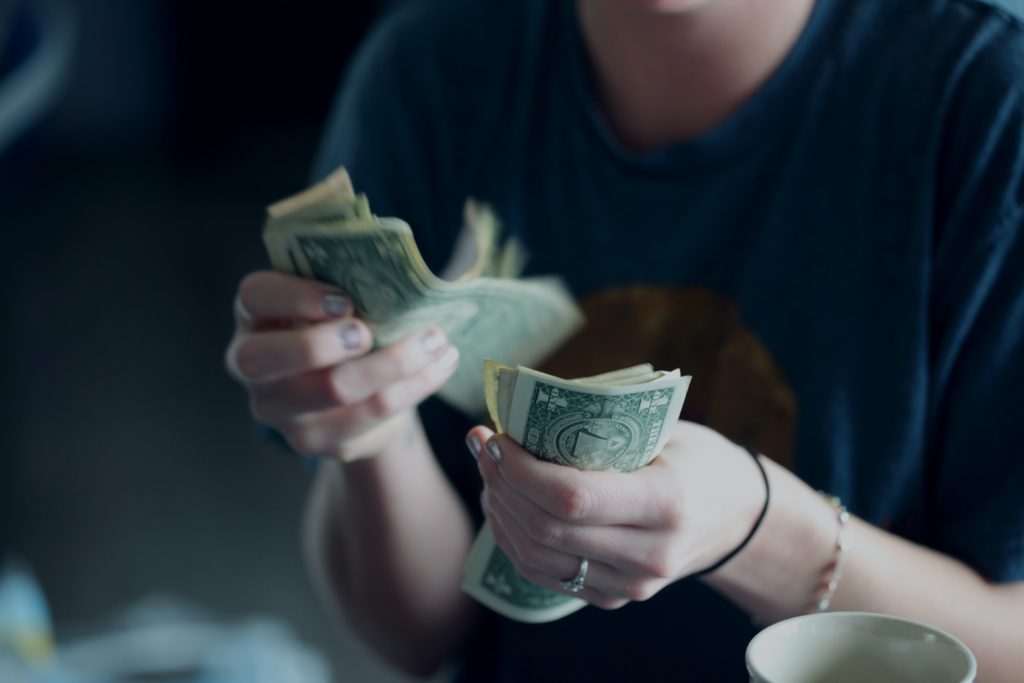 One of the most discussed and divisive pay equity issues is the gender pay gap, or the difference between what men and women performing comparable work are paid. Fifty-six years after passage of the Equal Pay Act, women still earn approximately 80% of what a male peer makes.[1] The National Women’s Law Center calculates that this gap costs women who work full-time $10,169 annually; over the course of a 40-year career, that translates to $403,440 lost due to the pay gap.[2]

Drilling down into US census data, the statistics are even more stark. Here’s the amount women earn, by race, for every dollar their white male counterpart earns:[3]

The National Committee on Pay Equity (NCPE), a coalition of women’s and civil rights organizations, established Equal Pay Day in 1996 in an effort to raise awareness of this gap. Specifically, the organization declares a day in March to symbolize how much longer a woman would have to work to earn what a man made in the prior year. Or, how far women are “in the red” with their pay. Although the gender gap has narrowed since 1963, progress has been negligible since 2005.

Is there A Reason for the Pay Gap?

Pew Research states that “Much of the gap has been explained by measurable factors such as educational attainment, occupational segregation and work experience,”[4] and attributes narrowing primarily to “gains women have made in each of these dimensions.” The New York Times gender editor and author Jessica Bennett counters that narrative:[5]

As Maya Salam mused in the introduction to her “Womensplaining the Pay Gap” article in The New York Times: “If I had a nickel for every time someone told me, ‘The gender pay gap is a myth,’ I may have made back the income I’ve lost over the years for being a woman.”[6]

The Pay Gap across the United States

As Figure 1[7] illustrates, a gender pay gap exists in every state. 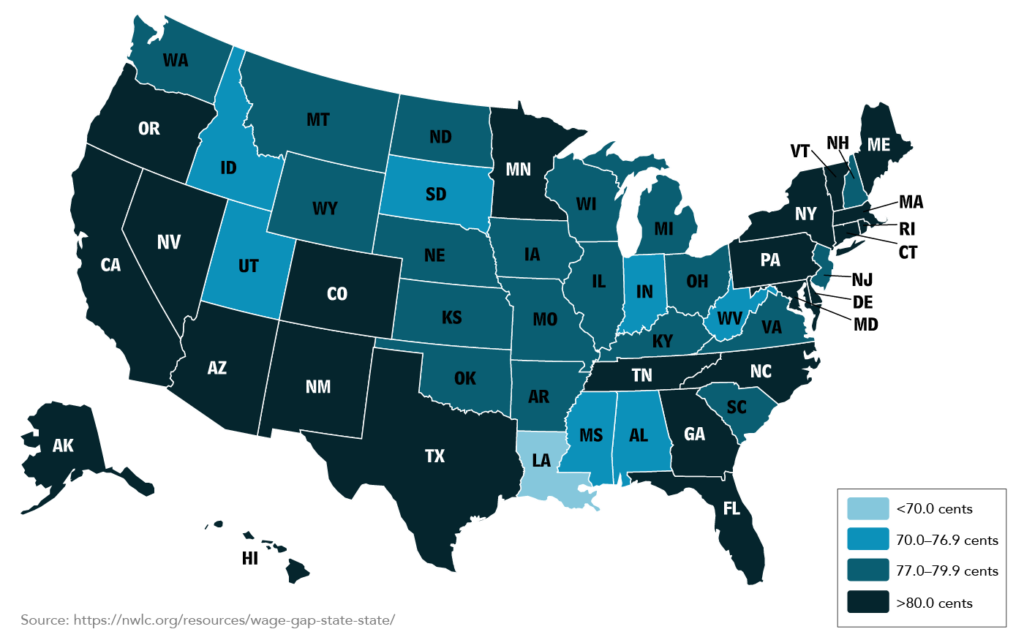 The National Women’s Law Center notes that “women fare best in California [also D.C., New York, and Florida], where women working full time, year round typically make 89 cents for every dollar their male counterparts make. Women fare worst relative to men in Louisiana and Utah, where women’s earnings represented only 69 and 71 percent of men’s earnings, respectively.” Of the 25 major cities profiled by the Association of University of Women, Los Angeles had the highest overall gender pay ratio at 91%, outperforming New York (85%), San Francisco (83%), Portland (79%) and Chicago and Seattle, both posting a ratio of 78%.[8] For perspective, the gender pay ratio is calculated as women’s median earnings divided by men’s median earnings.

The American Association of University Women (AAUW) notes that “Employer practices—such as using prior salary history in setting current pay and prohibiting employees from discussing their wages—compound the problem.”[9] To the first point, a number of states and localities have passed laws banning employers from asking candidates for salary history. HR Dive notes that some “also prohibit an employer from relying on an applicant’s pay history to set compensation if discovered or volunteered; others prohibit an employer from taking disciplinary action against employees who discuss pay with coworkers.”[10]

California law, applicable to both private and public employers, prohibits requests for a candidate’s pay history and, further, prohibits employers from using information if volunteered or otherwise known to determine a new hire’s pay. Finally, the law requires employers to provide applicants with pay scale information if requested. Absent a state law regarding discussion of wages, an employer may be restrained by either the National Labor Relations Act (NLRA) or Executive Order 13665, both of which support wage transparency.

For more on this point, read Nancy Owen’s article “Is It Illegal to Prohibit Employees from Talking Salary?”

Economics of the Pay Gap 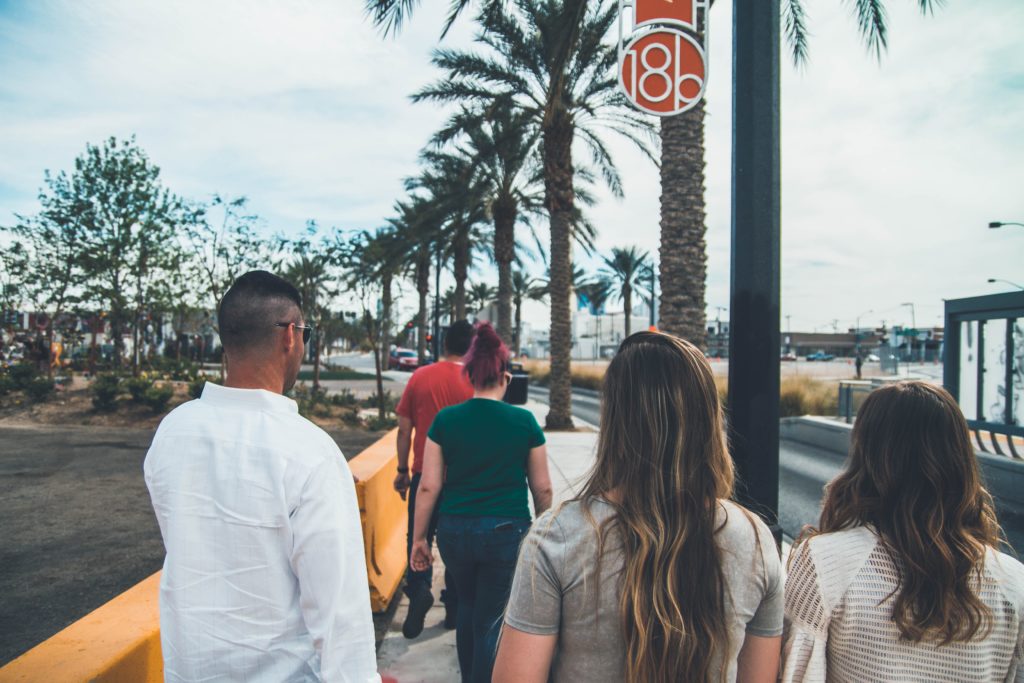 The pay gap isn’t just a women’s problem, it’s a societal and economic issue. The Institute for Women’s Policy Research (IWPR) notes that women represent almost 50% of the workforce and are the sole or co-provider in half of American families with children.[11] Despite being paid less, women’s earnings are critically important to the stability of individuals, families and the extended family networks that women support. IWPR’s analysis found that equal pay would:[12] 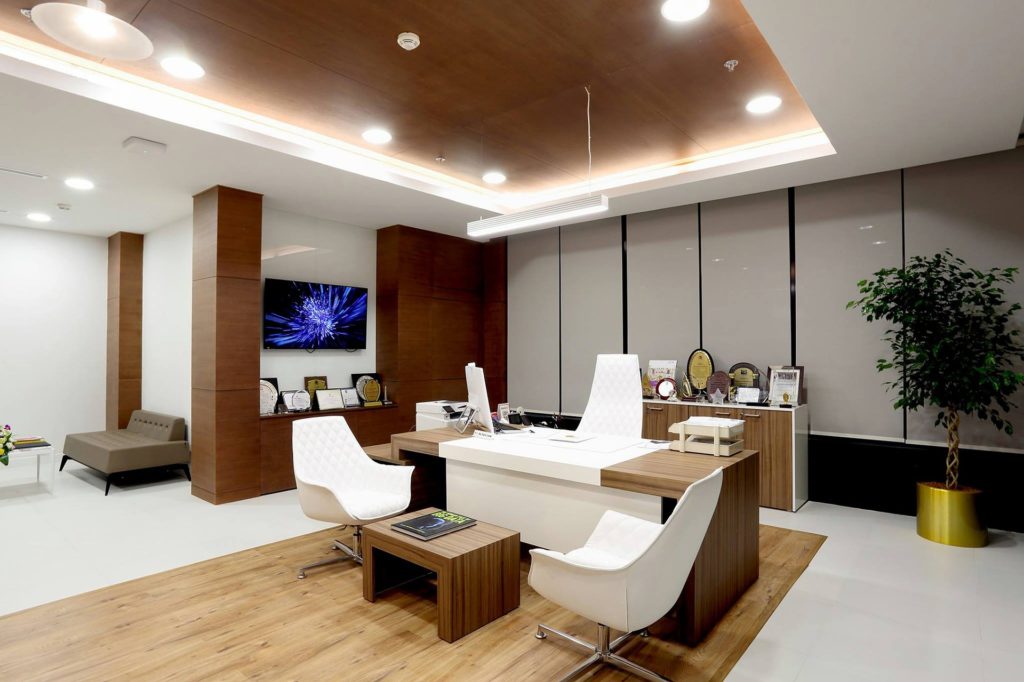 Until changes are made to federal or state laws, progress on closing the pay gap will require business leadership and advocacy. And, based on their values or in response to employee expectations or both, a number of businesses are taking the challenge. In its 2019 Compensation Best Practices Report, PayScale notes that “It will prove increasingly difficult to attract and keep the right people without ensuring your compensation philosophy, strategy and practices are in close alignment with your values as an organization.”[13] As PayScale SVP of Marketing, Tim Low, notes “employees have become fed up when their organizations behave in ways that don’t align with their personal values,”[14] referencing demonstrations and court cases based on perceived pay discrimination at Google, Nike, and Oracle in 2018.

For perspective on what’s at stake, a PaySale study found that “employees who rate their employers poorly on pay transparency are 80 percent more likely to say they want to leave in the next six months than those who give higher marks.”[15]

What does success look like? Companies taking the lead, for example, Adobe, Starbucks, and Salesforce, have achieved full pay parity for women and underrepresented minorities and are “taking steps toward creating a better workplace for women and minorities to thrive, advance their careers and move into more leadership roles.”[16] As Adobe’s Executive Vice President of Customer and Employee Experience, Donna Morris, puts it: “If you fundamentally believe that people are the most important asset to your company, why wouldn’t you seek to establish practices and programs, and have a principle that you should compensate fairly based on their contribution?”[17] 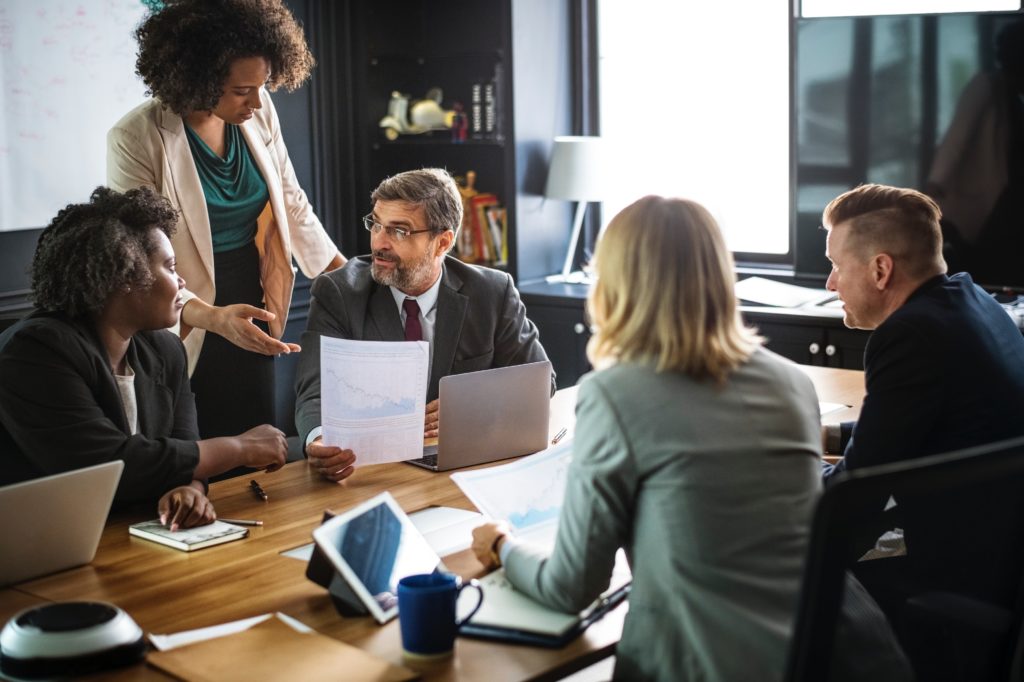 Barbara Frankel states that “pay equity is about more than just leveling salaries . . . [it] means creating equal opportunities for high-paying positions, evaluating areas of bias that may prohibit hiring and promotions, and factoring in work accommodations that could slow pay progress, such as flexible work arrangements and time off for family leave.”[18]

The following are best practice highlights based on Frankel’s interviews with executives:[19]