In his TED Talk, brand strategist Paul Kemp-Robertson notes that non-government currencies are gaining consumer trust and asks the rhetorical question “Is there a reason for governments to be in charge of money?”[1] Given the proliferation of alternative currencies—from digital coins and wallets to brand point systems and rewards—the answer may, at some point in the future, be “no.” What’s clear in the present is that the process of making purchases and other payments is being transformed, with implications for monetary policy.

What constitutes an alternative currency is open to debate. For our purposes, we’ll consider three categories of currency: cryptocurrencies, mobile commerce and regionally-based currency. A point worth considering is that “currency” and payment processes are being transformed not only by technology—for example, blockchain and mobile technologies and related services—but, as Kemp-Robertson alluded to, by consumer trust (or lack thereof) in the system. 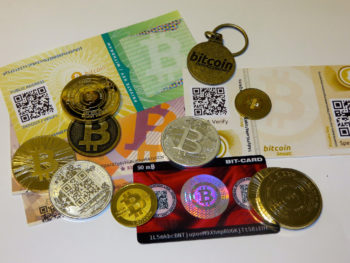 Investopedia defines a cryptocurrency as “a digital or virtual currency that uses cryptography for security.” The most credible cryptocurrencies are those based on blockchain technology that records, validates and stores transaction information across a decentralized and distributed network of personal computers. Although there were earlier versions, the first cryptocurrency to gain broad market attention was Bitcoin, launched in 2009.[2] Retailer acceptance of bitcoin is still limited to early adopters, including a few major retailers such as Microsoft, Overstock and Newegg.[3] However, the currency’s volatility—a historical high and low of $20,089 and $65.53 and a range of 4,030.63 over the most current 90 day period—make it more appropriate as a speculative investment than for use as money.

Coinmarketcap.com lists over 2,000 cryptocurrencies with a total market value of roughly $144 billion.[4] As of March 31, 2019, there were approximately 17.6 million bitcoins in circulation with a total market value of $72 billion.[5] To put this in perspective, check out The Money Project’s visualization of the world’s money and markets. To excerpt, as of 2017 the value of cryptocurrency was $173 billion compared $7.6 trillion in coin and banknotes, $36.8 trillion in “narrow money” (equivalent to M1) and $90.5 trillion in “broad money” (equivalent to M2).

Given those relative values, what is the perceived impact on monetary policy? In a speech at the 2018 Decoding Digital Currency Conference, Federal Governor Lael Brainard stated that “the still relatively small scale of cryptocurrencies in relation to our broader financial system and relatively limited connections to our banking sector suggest that they do not currently pose a threat to financial stability.”[6] While recognizing that cryptocurrencies “represent the leading edge” of digital technologies for payments, she also noted that the extreme fluctuations in asset value limit the currency’s ability to serve as a “stable store of value” and “meaningful unit of account,” two essential functions of money. Additional factors highlighted as risk factors for potential uses:

Reporting on a survey of central banks, the Bank of International Settlements (BIS) found that the majority (58%) reported public adoption of cryptocurrency as minimal (“trivial/no use”), with 28% reporting niche use and 14% do not know; there were no responses to either of two additional options: “Significant use” and “Wider public use.” Survey responses indicate that most central banks are still evaluating the situation. Of those that expressed an opinion, the majority expected use in payments to remain low due to limited acceptance, perceived user risk and, in some cases, legal prohibitions. The report concluded that “most central banks consider cryptocurrencies to be a niche technology rather than the future of money.”

Mobile payments aren’t a form of currency per se but a means of accessing financial services and conducting transactions on a mobile device. Although the definition of m-commerce differs somewhat based on authority, a working definition is sales transactions made on a smartphone or tablet. Using this definition, research firm eMarketer projects that m-commerce will represent approximately 50% of U.S. e-commerce sales in 2020, up from approximately 35% in 2017. The majority (over 70%) of mobile commerce transactions are made on smartphones, with the remainder on tablets. Statista.com puts this in perspective with a graph showing U.S. mobile retail commerce revenue percentages and dollars from 2013 to 2021.

Although mobile’s percent of total U.S. retail sales is still relatively low (roughly 3%, with e-commerce representing approximately 10% of retail sales), the impact of mobile technology is not only at the point of sale. Forrester Research estimates that by 2022, m-commerce will impact 42% of total retail sales. Forrester principal Brendan Miller, “shoppers have integrated smartphones into their product research at every phase of the customer life cycle, from discovery to price checking in-store.”

Factors limiting adoption of mobile wallets include fears about security, limited retailer acceptance, the proprietary nature of apps and what Bluefin refers to as “unnecessary payment friction” caused by having to switch between mobile wallets based on where a consumer is shopping. Also, in developed countries, there isn’t a compelling point of pain that would prompt a switch to mobile payments. Visa and MasterCard are widely accepted and use isn’t limited by type of device or operating system as is true with Apple Pay, Android Pay and Samsung Pay. However, the consensus is that ”as smartphones and internet connectivity reach a saturation point, consumers will likely start to view their phones more as banking and shopping devices.”[7] For perspective, mobile wallet transactions are expected to total $800 billion in 2019, up from $718 billion in 2017.[8] As Apple, Google, Samsung and PayPal increase their focus on mobile payments, and merchants ramp up their mobile capabilities.

The fastest growth in mobile money services is in underbanked markets in Africa, Asia and Latin America. The World Bank reports that 69 percent of adults now have access to a bank account or an account through a mobile money provider. World Bank President Jim Yong Kim expresses the economic development view, stating “Having access to financial services is a critical step towards reducing both poverty and inequality, and new data on mobile phone ownership and internet access show unprecedented opportunities to use technology to achieve universal financial inclusion.”[9] However, the implications may be greater for marketers who now have access an additional 3.8 billion people. Indeed, given that lack of central bank comment on mobile commerce, the primary implications will be for the major technology players, marketers and retailers.

Regions develop “currencies” to support a range of local economic development and sustainability initiatives. According to The Schumacher Center for a New Economics, a non-profit promoting local resilience, “Centralized currency issue serves centralized production whereas regional currencies represent a democratization of currency issue, supporting local businesses and educating consumers about how their money circulates in the local economy.”[10]

The Center has been involved in the development of a number of local currencies, including BerkShares, a currency specific to Western Massachusetts. Launched in 2006 and still in operation, The New York Times referred to the BerkShares program as a “great economic experiment.” The program currently involves a network of four community banks, approximately 400 locally owned business and local citizens. BerkShares can be obtained at participating bank branches at an exchange rate of $0.95 to one BerkShire and BerkShares can be exchanged for U.S. dollars at the same exchange rate. BerkShares can be spent at face value—that is, 100 BerkShares equals $100—with participating businesses and can be used by private parties as payment for services, if desired.

There are a number of active regional currency systems in operation in the United States and internationally. Refer to the Schumacher’s Active Programs page for summaries of the initiatives. Although this last category of currency doesn’t have systemic (i.e., monetary policy) impact at the current scale, the potential community impact is worth considering if you’re a local business, non-profit or promoting regional economic development.