As discussed in the section on race, the term African American can be a misnomer for many individuals, and needs to be carefully examined when applied in scholarly contexts. Many people with dark skin may have more recent roots in Europe, the Caribbean, or South America, and are, for example, Haitian, Afro-Puerto Rican (also known as Afro Borinquen), or Brazilian. The African diaspora refers to the scattering of people with African ancestry all over the world, but predominantly to populations in North and South America.

Further, African immigrants themselves may feel that African American is a misclassification that does not apply to their own identity and does not accurately describe the identity of Black people who have been in the western hemisphere for generations. In academia, the distinction between “African-American Studies,” “Black Studies,” and “Africana Studies” (among other names in departments ranging from history to humanities to English) is hotly debated, and holds importance not only to the faculty who dedicate their lives to this work, but also to those individuals and groups that identify as Black or African American. Because race is a social construction with real consequences, it is important to closely scrutinize the language we use to categorize people.

This section will focus on the experience of the enslaved people who were transported from Africa to the United States, and their progeny. Currently, the U.S. Census Bureau (2021) estimates that 14.2 percent of the United States’ population is Black or African American.

If Native Americans are the only minority group whose subordinate status occurred by conquest, African Americans are the exemplar minority group in the United States whose ancestors did not come here by choice. A Dutch sea captain brought the first Africans to the Virginia colony of Jamestown in 1619, and sold them as indentured servants. This was not an uncommon practice for either Blacks or whites, and indentured servants were in high demand. For the next century, Black and white indentured servants worked side by side, but the growing agricultural economy demanded greater and cheaper labor. By 1705, Virginia passed the slave codes declaring that any foreign-born, non-Christian could be a slave, and that slaves were considered property.

The next 150 years saw the rise of U.S. slavery, with Africans being kidnapped from their own lands and shipped to the New World on the trans-Atlantic journey known as the Middle Passage. Once in the Americas, the Black population grew until U.S.-born Blacks outnumbered those born in Africa. Early colonial slave codes, which were eventually replaced by U.S. laws, declared that the child of an enslaved laborer was also a slave, thus ensuring the practice of intergenerational slavery.

There is no starker illustration of the dominant-subordinate group relationship than that of slavery. In order to justify their discriminatory behavior, enslavers and their supporters had to view Blacks as innately inferior. Enslaved people were denied even the most basic rights of citizenship, a crucial enabling factor for enslavers and their supporters. Slavery poses an illustrative example of conflict theory’s perspective on race relations, as the dominant group needed complete control over the subordinate group in order to maintain power. Extreme corporal punishments were common, including whippings, lashings, and branding. Crimes of war such as rape, family separation, and public executions were part of a larger system of social control, and the enslaved were prohibited from reading or obtaining an education. In the 1848 U.S. Supreme Court case Dred Scott v. Sandford, the court declared that enslaved people were property and that slaveholders were protected in this legal arrangement by the due process clause of the Fifth Amendment (which effectively meant that the enslaved laborers were still considered property even in free territories). The Dred Scott decision also established that persons of African descent (whether freed or enslaved) had no legal standing as citizens, and therefore could not sue—for their freedom or anything else—in federal court.

Slavery eventually became an issue over which the nation divided into geographically and ideologically distinct factions, leading to the Civil War. And while the abolition of slavery on moral grounds was certainly a catalyst to war, it was not the only driving force. Students of U.S. history will know that the institution of slavery was crucial to the Southern economy, whose production of crops like rice, cotton, and tobacco relied on the virtually limitless and cheap labor that slavery provided. In contrast, the North didn’t benefit economically from slavery, resulting in an economic disparity tied to racial/political issues. During the post-Civil War Reconstruction period, the Thirteenth Amendment (1863) was ratified to abolish involuntary servitude, the Fourteenth Amendment (1868) to guarantee birthright citizenship, and the Fifteenth Amendment (1870) to bar racial discrimination in voting.

In the South, what developed in the aftermath of the war was essentially slavery by a different name. Some of the practices that enabled the continuation of disenfranchisement and economic oppression included sharecropping, tenant farming, the convict lease system, voter suppression (i.e., the Black Codes), outright violence and intimidation, and gerrymandering, which is the drawing of Congressional districts in a way that reduces the power of Black votes.

In 2010, Michele Alexander published a book titled The New Jim Crow: Mass Incarceration in the Age of Colorblindness, in which she argues that Black people and other minority populations are kept in an inferior position in the United States because of the disproportionate and unfair number of minorities who are imprisoned.

The twentieth century (1900s) included a number of social movements that worked to create equality for Black people in the United States. Sociologist W.E.B. DuBois was at the forefront of the Niagara Movement (1905-1909), which sought to bring about legal change and equal economic and educational opportunities for African Americans. The 1908 Springfield Race Riot galvanized a group of activists including white Jewish socialists (male and female), white suffragists, and African Americans (including DuBois and Ida B. Wells) to create the National Association for the Advancement of Colored People (NAACP) in 1909. The NAACP still exists today and continues its mission to “ensure a society in which all individuals have equal rights without discrimination based on race.”[1] DuBois also served as editor of The Crisis, a journal that reported news on civil rights activism and Black art, writing, and poetry, “with the vision of challenging mainstream stereotypes of African Americans”[2].

A half-century later, the Civil Rights Movement was characterized by boycotts, marches, sit-ins, and “freedom rides,” all forms of activism practiced by a subordinate group no longer willing to submit to domination. In 1954, the landmark case Brown v. Board of Education resulted in a Supreme Court decision that interpreted segregated schools as a violation of the Fourteenth Amendment, which is meant to guarantee equal protection before the law. A major blow to America’s formally institutionalized racism was the Civil Rights Act of 1964. This Act banned discrimination based on race, color, religion, sex, or national origin, and was followed one year later by the Voting Rights Act, which outlawed discriminatory voting practices. Despite these crucial laws, some sociologists would argue that institutionalized racism persists to this day.

Most sociologists point out that institutionalized racism persists in social institutions such as public schools and the criminal justice system (laws, policing, and sentencing). Some states have also found different ways to limit the franchise (i.e., voting rights) for minority groups. These methods including mandatory requirements for IDs, fewer polling places in rural and poor areas, and felon disenfranchisement in states with large Black populations. Schools today are more segregated in some areas than ever. This is an example of de facto segregation. As we will see in the module on education, Black children are more likely to be labeled as deviant, and are suspended and/or expelled at rates far greater than for whites who commit the same or similar offenses. This state of affairs has led some to argue that a “school-to-prison pipeline” begins as early as pre-k within public schools.

Although government-sponsored, formalized discrimination against African Americans has been outlawed, true equality does not yet exist. The National Urban League’s 2020 Equality Index reports that Black people’s overall equality level with white people has been generally improving. Measuring standards of civic engagement, economics, education, and others, Black people had an equality level of 71 percent in 2010 and had an equality level of 74 percent in 2020. The Index, which has been published since 2005, notes a continued trend of inequality with white people, especially in the areas of unemployment, insurance coverage, and incarceration. Black people also trail white people considerably in the areas of economics, health, and education (National Urban League 2020).

To what degree do racism and prejudice contribute to this continued inequality? The answer is complex. The year 2008 saw the election of this country’s first African American president: Barack Hussein Obama. Despite being popularly identified as Black, former President Obama is of mixed heritage; his mother was a white anthropologist from Kansas and his father was Kenyan. Obama was raised in Hawaii and Indonesia, so culturally his background is steeped in Pacific Islander and Southeast Asian influences. The fact that Obama is referred to as “the first Black president” reflects the logic of the “one-drop rule,” or the tendency to view someone’s racial status as wholly corresponding to the minority status within the individual’s heritage.

Although all presidents have been publicly mocked at times (Gerald Ford was depicted as a klutz, Bill Clinton as someone who could not control his libido), a startling percentage of the critiques of Obama have been based on his race. The most blatant of these was the controversy over his birth certificate, where the “birther” movement questioned his citizenship and thus his right to hold office. Although Blacks have come a long way from slavery, the echoes of centuries of disempowerment are still evident. 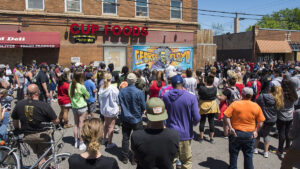 Figure 1. This gathering at the site of George Floyd’s death took place five days after he was killed. The location, at Chicago Avenue and 38th Street in Minneapolis, became a memorial. (Credit: Fibbonacci Blue/flickr)

In 2020, racial justice movements expanded their protests against incidents of police brutality and all racially motivated violence against Black people. Black Lives Matter (BLM), an organization founded in 2013 in response to the acquittal of George Zimmerman, was a core part of the movement to protest the killings of George Floyd, Breonna Taylor and other Black victims of police violence. Millions of people from all racial backgrounds participated in the movement directly or indirectly, demanding justice for the victims and their families, redistributing police department funding to drive more holistic and community-driven law enforcement, addressing systemic racism, and introducing new laws to punish police officers who kill innocent people.

The racial justice movement has been able to achieve some these demands. For example, Minneapolis City Council unanimously approved $27 million settlement to the family of George Floyd in March 2021, the largest pre-trial settlement in a wrongful death case ever for the life of a Black person (Shapiro and Lloyd, 2021). $500,000 from the settlement amount is intended to enhance the business district in the area where Floyd died. Floyd, a 46-year-old Black man, was arrested and murdered in Minneapolis on May 25, 2020. Do you think such settlement is adequate to provide justice for the victims, their families and communities affected by the horrific racism? What else should be done more? How can you contribute to bring desired changes?

African diaspora:
the dispersion of African peoples into other communities, especially those in North and South America, from the 16th to the 19th centuries