The earliest immigrants to America arrived millennia before European immigrants. Dates of the migration are debated, with estimates ranging from between 45,000 and 12,000 BCE. It is thought that these early migrants came across a land bridge from present-day Siberia in search of big game to hunt, which they found in huge herds of grazing herbivores in the Americas. Over the centuries and then the millennia, Native American culture blossomed into an intricate web of hundreds of interconnected tribes, each with its own customs, traditions, languages, and religions.

Native American culture prior to European settlement is referred to as Pre-Columbian: that is, prior to the coming of Christopher Columbus in 1492. Mistakenly believing that he had landed in the East Indies, Columbus named the indigenous people “Indians,” a name that has persisted for centuries despite being a geographical misnomer and one used to blanket hundreds of sovereign tribal nations (NCAI 2020).

The history of intergroup relations between European colonists and Native Americans is a brutal one. As discussed in the section on genocide, the effect of European settlement of the Americans was to nearly destroy the indigenous population. And although Native Americans’ lack of immunity to European diseases caused the most deaths, overt mistreatment and massacres of Native Americans by Europeans were devastating as well.

From the first Spanish colonists to the French, English, and Dutch who followed, European settlers took what land they wanted and expanded across the continent at will. If indigenous people tried to retain their stewardship of the land, Europeans fought them off with superior weapons. Europeans’ domination of the Americas was indeed a conquest; one scholar points out that Native Americans are the only minority group in the United States whose subordination occurred purely through conquest by the dominant group (Marger 1993).

After the establishment of the United States government, discrimination against Native Americans was codified and formalized in a series of laws intended to subjugate them and keep them from gaining any power. Some of the most impactful laws are as follows:

Native American culture was further eroded by the establishment of boarding schools in the late nineteenth century. These schools, run by both Christian missionaries and the United States government, had the express purpose of “civilizing” Native American children and assimilating them into White society. The boarding schools were located off-reservation to ensure that children were separated from their families and culture. Schools forced children to cut their hair, speak English, and practice Christianity. Physical and sexual abuses were rampant for decades; only in 1987 did the Bureau of Indian Affairs issue a policy on sexual abuse in boarding schools. Some scholars argue that many of the problems that Native Americans face today result from almost a century of mistreatment at these boarding schools.

Although many Native Americans were already U.S. citizens through marriage, military service, or accepting land allotments, it wasn’t until 1924 and the Indian Citizenship Act that all Native Americans were granted citizenship. American Indians today have all the rights guaranteed in the U.S. Constitution, can vote in elections, and run for political office, but controversies remain over how much jurisdiction the federal government has over tribal affairs, sovereignty, and cultural practices. Many Native Americans served in the American armed forces during World War I (1914-1918) and World War II (1939-1945). Hundreds of Cherokee, Choctaw, and Navajo service members (among others) utilized their tribal languages in the unique and vital “code talker” program, which provided a means of transmitting messages during combat operations that could not be deciphered by enemy forces.

The eradication of Native American culture continued until the 1960s, when Native Americans were able to participate in and benefit from the civil rights movement. The Indian Civil Rights Act of 1968 guaranteed Indian tribes most of the rights of the United States Bill of Rights. New laws like the Indian Self-Determination Act of 1975 and the Education Assistance Act of the same year recognized tribal governments and gave them more power. Indian boarding schools have dwindled to only a few, and Native American cultural groups are striving to preserve and maintain old traditions to keep them from being lost forever. Today, Native Americans are citizens of three sovereigns: their tribal nations, the United States, and the state in which they reside (NCAI 2020).

Today, Native Americans (some of whom now wished to be called “American Indians” so as to avoid the “savage” connotations of the term “native”) still suffer the effects of centuries of degradation. There are over five million Native Americans in the United States, 78% of whom live outside reservations. Generational poverty, inadequate education, cultural dislocation, and high rates of unemployment contribute to Native American populations falling to the bottom of the economic spectrum. Native American populations also have lower life expectancies than most groups in the United States, and high rates of suicide, particularly among 18-24 year olds, is a growing concern. Recent large-scale research from the University of Arizona has found comparable rates of alcohol use between Native Americans and other racial groups, which calls into question the stereotypes of rampant alcoholism among Native Americans (for more information on the study, watch a summary video clip of the University of Arizona research).
Native Americans continue to have a complicated relationship with the U.S. government. Much can be learned from the variety of Native American tribes, including a worldview that sees the natural environment as something we are entrusted to care for and maintain for future generations, an ethos expressed by the following: “We do not inherit the earth from our ancestors; we borrow it from our children.” 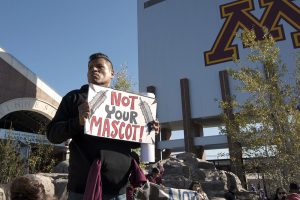 Figure 2. Many Native Americans (and others) believe sports teams with names like the Indians, Braves, and Warriors perpetuate unwelcome stereotypes. The Not Your Mascot protest was one of many directed at the then Washington Redskins, which eventually changed its name. (Credit: Fibonacci Blue/fickr)

The sports world has abounded with team names like the Indians, the Warriors, the Braves, and even the Savages and Redskins, though things are beginning to change. These names arise from historically prejudiced views of Native Americans as fierce, brave, and strong: attributes that would be beneficial to a sports team, but are not necessarily beneficial to people in the United States who should be seen as more than that. In college sports, the Florida State Seminoles’ fans do a “tomahawk chop.” Many see this as an instance of cultural appropriation and a de-contextualization of Native American history.

Since the civil rights movement of the 1960s, the National Congress of American Indians (NCAI) has been campaigning against the use of such mascots, asserting that the “warrior savage myth . . . reinforces the racist view that Indians are uncivilized and uneducated and it has been used to justify policies of forced assimilation and destruction of Indian culture” (NCAI Resolution #TUL-05-087 2005). The campaign has met with limited success. While some teams have changed their names, hundreds of professional, college, and K–12 school teams still have names derived from this stereotype. Another group, American Indian Cultural Support (AICS), is especially concerned with the use of such names at K–12 schools, influencing children when they should be gaining a fuller and more realistic understanding of Native Americans than such stereotypes supply.

After years of pressure and with a wider sense of social justice and cultural sensitivity, the Washington Football Team removed their offensive name before the 2020 season, and the Cleveland Major League Baseball team will change to become the Guardians after the 2021 season.

What do you think about such names? Should they be allowed or banned? What argument would a symbolic interactionist make on this topic?