Charter schools are self-governing public schools that have signed agreements with state governments to improve student outcomes when poor performance has been recorded on tests required by the No Child Left Behind Act. While such schools receive public money, they are not subject to the same rules that apply to regular, state-run public schools. In return, they make agreements to achieve specific results. Charter schools, as part of the public education system, are free to attend, and are accessible via lottery when there are more students seeking enrollment than there are spots available at the school. Some charter schools specialize in certain fields, such as the arts or science, while others are more generalized. 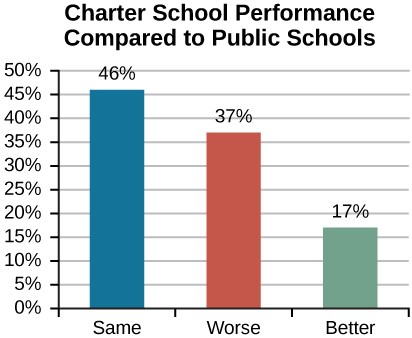 Figure 1. The debate over the performance of charter schools vs. public schools is a charged one. Dozens of studies have been made on the topic, and some, as reflected in Stanford’s CREDO study above, do not support the claim that charter schools always outperform public schools. (Source: Based on the CREDO study Multiple Choice: Charter School Performance in 16 States)

President Trump appointed Betsy DeVos as Secretary of Education at the start of his administration. DeVos had a history of supporting charter schools, which she argued were a significant part of the “school choice” movement. Mrs. DeVos’ support for charter schools is rooted in the capitalist idea that if parents have a choice to send their children to a charter school, and charter schools receive funding from the government based on number of children, this will incentivize public schools to improve their quality of teaching.[1] School choice, however, does not merely include public and charter schools; DeVos wants to expand vouchers, which would allow lower- and middle-income families access to private schooling.

Betsy DeVos, the former Secretary of Education, is an advocate for vouchers and charter schools, which has resulted in a revival in the school choice debate. This video clip from PBS explains just some of the mixed opinions on charter schools, their varied success rates, and the impact of charters in some predominately Black communities.

Money as Motivation in Charter Schools

Public school teachers typically find stability, comprehensive benefits packages, and long-term job security. In 2011, one charter school in New York City set out to learn if teachers would give up those protections if it meant an opportunity to make far more money than the typical teacher’s salary. The Equity Project is a privately run charter school that offered teachers positions paying $125,000 per year (more than twice the average salary for teachers). The school’s founder and principal, Zeke Vanderhoek, explained that this allows him to attract the best and brightest teachers to his school—to decide whom he hires and how much they are paid—and build a school where “every teacher is a great teacher” (CBS News 2011). He sees attracting top teachers as a direct road to student achievement. A nationwide talent search resulted in the submission of thousands of applications. The final round of interviews consisted of a day-long trial run. The school looks for teachers who can show evidence of student growth and achievement. They also must be highly engaging.

The majority of students at the school are African American and Hispanic, from poor families, and reading below grade level. The school faces the challenge faced by schools all over the United States: getting poor, disadvantaged students to perform at the same level as their more affluent counterparts. Vanderhoek believes his team of dream teachers can help students close their learning gaps by several grade levels within one year.

This is not an affluent school. It is publicly funded and classes are held in trailers. Most of the school’s budget goes into the teachers’ salaries. There are no reading or math aides; those roles are filled by the regular classroom teachers.

The experiment may be working. Students who were asked how they feel about their education at The Equity Project said that their teachers care if they succeed and give them the attention they need to achieve at high levels. They cite the feeling that their teachers believe in them as a major reason for liking school for the first time.

Of course, with the high salary comes high risk. Most public schools offer contracts to teachers. Those contracts guarantee job security. But The Equity Project is an at-will employer. Those who don’t meet the standards set by the school will lose their jobs. Vanderhoek does not believe in teacher tenure, which he feels gives teachers “a job for life no matter how they perform” (CBS News 2011). With a teaching staff of roughly fifteen, he terminated two teachers after the first year. In comparison, in New York City as a whole, only seven teachers out of 55,000 with tenure have been terminated for poor performance.

One of those two teachers who was let go said she was relieved, citing eighty- to ninety-hour work weeks and a decline in the quality of her family life. Meanwhile, there is some question as to whether the model is working. On one hand, there are individual success stories, such as a student whose reading skills increased two grade levels in a single year. On the other, there is the fact that on the state math and reading exams taken by all fifth graders, the Equity Project students remained out-scored by other district schools (CBS News 2011). Do charter schools actually work? A Stanford CREDO study in 2009 found “there is a wide variance in the quality of the nation’s several thousand charter schools with, in the aggregate, students in charter schools not faring as well as students in traditional public schools” (CREDO 2009).

Homeschooling refers to children being educated in their own homes, typically by a parent, instead of in a traditional public or private school system. Proponents of this type of education argue that it provides an outstanding opportunity for student-centered learning while circumventing problems that plague today’s education system. Opponents counter that homeschooled children miss out on the opportunity for social development that occurs in standard classroom environments and school settings.

Proponents say that parents know their own children better than anyone else and are thus best equipped to teach them. Those on the other side of the debate assert that childhood education is a complex task and requires the degree (or several) that teachers spend years earning. After all, they argue, a parent may know their child’s body better than anyone, yet they seeks out a doctor for their child’s medical treatment. Just as a doctor is a trained medical expert, teachers are trained education experts.

The National Center for Education Statistics shows that the quality of the national education system is the major concern when choosing to homeschool their children, expressing particular concerns about school environments.[2] White families make up a significant majority of homeschooling environments (83 percent). To date, researchers have not found consensus in studies evaluating the success, or lack thereof, of homeschooling.