Schools face the difficult issue of measuring teacher effectiveness. For example, most high school teachers perceive students as being prepared for college, while most college professors do not see those same students as prepared for the rigors of collegiate study. Some feel that this is due to primary and secondary-level (i.e., high school) teachers being unprepared to teach, as many teachers in the United States teach subjects that are outside their own field of study. This is not the case in many European and Asian countries. Only eight percent of United States fourth-grade math teachers majored or minored in math, compared with 48 percent of math teachers in Singapore. Further, students in disadvantaged American schools are 77 percent more likely to be educated by a teacher who didn’t specialize in the subject matter than students who attend schools in affluent neighborhoods (Holt, McGrath, and Seastrom 2006). Consequently, there are two broad structural problems in regards to teacher training in the United States: first, teachers are, according to some, underprepared to teach students due to a discrepancy between their academic preparation and their professional expectations; second, better-prepared teachers are more likely to be found in wealthier neighborhoods, further contributing to already existing educational inequality.

Social promotion is another issue identified by sociologists. This is the concept of passing students to the next grade regardless of whether they’ve met the standards for that grade. Critics of this practice argue that students should never move to the next grade if they have not mastered the skills required to “graduate” from the previous grade. Proponents of the practice question what a school is to do with a student who is three to four years older than other students in his or her grade, saying this creates more pressing issues than the practice of social promotion. Others are more concerned about the social consequences of holding students back, and about the social development of older students who would be surrounded by younger students.

Affirmative action has been a subject of debate, primarily as it relates to the admittance of college students. Opponents suggest that, under affirmative action, minority students are given greater weighted priorities for admittance. Supporters of affirmative action point to the way in which it grants opportunities to students who are traditionally done a disservice in the college admission process.

Affirmative action seeks to address racial/ethnic inequality in higher education, and is a heavily contested topic in education debates.

In a growing concern, the amount of college loan debt that students are taking on is creating a new social challenge. As of 2018, the average debt of students with loans was $37,172[1] upon graduation, leaving students hard-pressed to repay their education while earning entry-level wages, even at the professional level (Lewin 2011). With the inconsistent state of unemployment since the 2008 recession, jobs are often scarce, making student debt more burdensome, and in some cases, unserviceable. As recent graduates find themselves unable to meet their financial obligations, all of society is affected.

Is College Worth It? 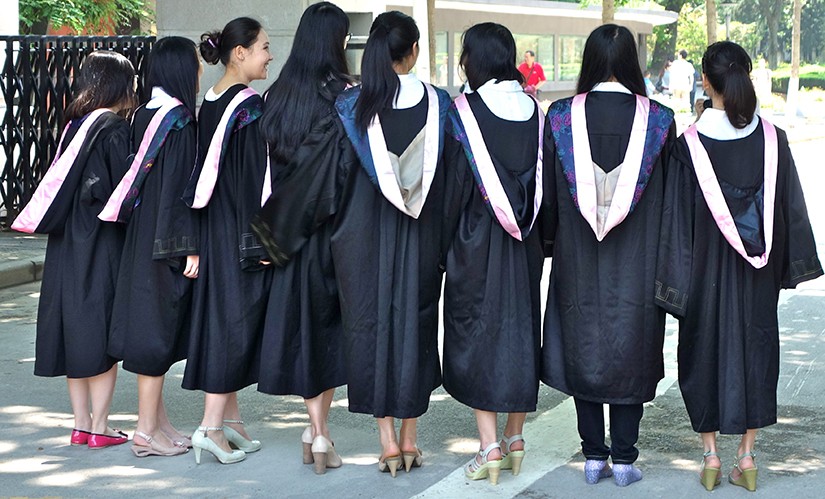 Figure 1.High school and college graduation often marks a milestone for families, friends, and even the wider community. Education, however, occurs in many venues and with far ranging outcomes. (Credit: Kevin Dooley/flickr)

“What the educator does in teaching is to make it possible for the students to become themselves” (Paulo Freire, Pedagogy of the Oppressed). David Simon, in his book Social Problems and the Sociological Imagination: A Paradigm for Analysis (1995), points to the notion that social problems are, in essence, contradictions—that is, statements, ideas, or features of a situation that are opposed to one another. Consider then, that one of the greatest expectations in U.S. society is that to attain any form of success in life, a person needs an education. In fact, a college degree is rapidly becoming an expectation at many levels of success, not merely an enhancement to our occupational choices. And, as you might expect, the number of people graduating from college in the United States continues to rise dramatically.

The net result is that those who do graduate from college are likely to begin a career in debt. As of 2009, a typical student’s loans amounted to around $23,000. Ten years later, the average amount of debt for students who took loans grew to over $30,000. The overall national student loan debt topped $1.6 trillion in 2020, according to the Federal Reserve. These rising costs and risky debt burdens have led to a number of diverse proposals for solutions. Some call for cancelling current college debt and making more colleges free to qualifying students. Others advocate for more focused and efficient education in order to achieve needed career requirements more quickly. Employers, seeking both to widen their applicant pool and increase equity among their workforce, have increasingly sought ways to eliminate unnecessary degree requirements: If a person has the skills and knowledge to do the job, they have more access to it (Kerr 2020). 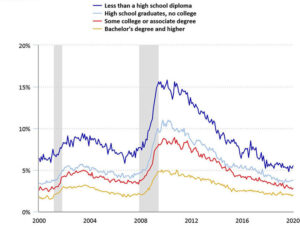 Figure 2. Unemployment rates for people age 25 and older by educational attainment. As can be seen in the graph, the overall unemployment rate began falling in 2009 after it peaked during the financial crisis and continued its downward trend through the decade from 2010 to 2020. (This graph does not account for the unemployment spike during the COVID-19 pandemic.) Note the differences in educational attainment and their impact on unemployment. People with bachelor’s degrees have always had the lowest levels of unemployment, while those without a high school diploma have always had the highest level. (Credit: Bureau of Labor Statistics)

Is a college degree still worth it? Lifetime earnings among those with a college degree are, on average, still much higher than for those without. A 2019 Federal Reserve report indicated that, on average, college graduates earn $30,000 per year more than non-college graduates. Also, that wage gap has nearly doubled in the past 40 years (Abel 2019).

Is the wage advantage enough to overcome the potential debt? And what’s behind those averages? Remember, since the $30,000 is an average, it also confirms what we see from other data: That certain people and certain college majors earn far more than others. As a result, earning a college degree in a field that has a smaller wage advantage over non-college graduates might not seem “worth it.”

But is college worth more than money?

A student earning Associate’s and Bachelor’s degrees generally will often take a wide array of courses, including many outside of their major. The student is exposed to a fairly broad range of topics, from mathematics and the physical sciences to history and literature, the social sciences, and music and art through introductory and survey-styled courses. It is in this period that the student’s world view is, it is hoped, expanded. Then, when they begin the process of specialization, it is with a much broader perspective than might be otherwise. This additional “cultural capital” can further enrich the life of the student, enhance their ability to work with experienced professionals, and build wisdom upon knowledge. Over two thousand years ago, Socrates said, “The unexamined life is not worth living.” The real value of an education, then, is to enhance our skill at self-examination. Education, its impact, and its costs are important not just to sociologists, but to policymakers, employers, and of course to parents.