Conflict theorists do not believe that public schools reduce social inequality through providing equal opportunity. Rather, they believe that the educational system reinforces and perpetuates social inequalities that arise from differences in class, gender, race, and ethnicity. Where functionalists see education as serving a beneficial role, conflict theorists view it more negatively. To them, educational systems preserve the status quo and push people of lower status into obedience, which keeps them socioeconomically disadvantaged.

The fulfillment of one’s education is closely linked to social class. Students of low socioeconomic status are generally not afforded the same opportunities as students of higher status, no matter how great their academic ability or desire to learn. Picture a student from a working-class home who wants to do well in school. On a Monday, he’s assigned a paper that’s due Friday. Monday evening, he has to babysit his younger sister while his divorced mother works. Tuesday and Wednesday, he works stocking shelves after school until 10:00 p.m. By Thursday, the only day he might have available to work on that assignment, he’s so exhausted he can’t bring himself to start the paper. His mother, though she’d like to help him, is so tired herself that she isn’t able to give him the encouragement or support he needs. And since English is her second language, she has difficulty with some of his educational materials. They also lack a computer and printer at home, which most of his classmates have, so they rely on the public library or school system for access to technology. As this story shows, many students from working-class families have to contend with helping out at home, contributing financially to the family, poor study environments, and a lack of family support. This is a difficult match with education systems that adhere to a traditional curriculum that is more easily understood and completed by students of higher social classes.

Such a situation leads to social class reproduction, extensively studied by French sociologist Pierre Bourdieu. He researched how cultural capital, or cultural knowledge that serves as (metaphorical) currency that helps us navigate a culture, alters the experiences and opportunities available to French students from different social classes. Members of the upper and middle classes have more cultural capital than do families of lower-class status. As a result, the educational system maintains a cycle in which the dominant culture’s values are rewarded and thus generationally reproduced. Instruction and tests cater to the dominant culture and leave others struggling to identify with values and competencies outside their social class. For example, there has been a great deal of discussion over what standardized tests such as the SAT truly measure. Many argue that the tests group students by cultural ability rather than by natural intelligence. For example, a question on the comprehensive reading section of the SAT inquires about a painting at an art museum. For a student who has not experienced art museums regularly, this question poses greater difficulty than it does for a student who grew up going to cultural events such as art exhibitions. Such mechanisms in public education reinforce and perpetuate inequalities.

This video explains how cultural capital impacts a hypothetical student.

Click through this presentation to learn more about cultural capital and consider the ways that it influences your own experiences with the world.

The article referenced in the interactive above raises many important issues, and some questions we might pursue further are:

The cycle of rewarding those who possess cultural capital is found in formal educational curricula as well as in the hidden curriculum, which refers to the type of nonacademic knowledge that students learn through informal learning and cultural transmission. This hidden curriculum reinforces the positions of those with higher cultural capital and serves to bestow status unequally.

The Hidden Curriculum ideology is very prevalent in sociology, as sociologists seek to better understand how education is shaping society as a larger unit. This video explains what this means.

This next video explains how sociologists examine the hidden curriculum from the various sociological perspectives.

Conflict theorists point to tracking, a formalized sorting system that places students on “tracks” (advanced versus low-achievers) that perpetuate inequalities. While educators may believe that students do better in tracked classes because they are with students of similar ability and may have access to more individual attention from teachers, conflict theorists feel that tracking leads to self-fulfilling prophecies in which students live up (or down) to teacher and societal expectations (Education Week 2004). The ways by which students are assigned to tracks differs both between and within schools. Today, it is less common for schools to rigidly track students in all subjects, and it is less common to track them into different vocational paths. Administrators and teachers in a given school may carefully avoid using the term “tracking” to describe the organization of their school’s curriculum. Yet, schools maintain a variety of policies that sort students into different programs of study including: test scores and grade requirements, pre- and co-requisite requirements, and teacher recommendations.

Low-track classes tend to be primarily composed of low-income students, usually minorities, while upper-track classes are usually dominated by students from socioeconomically successful groups. In 1987, Jeannie Oakes theorized that the disproportionate placement of poor and minority students into low tracks does not reflect their actual learning abilities. Rather, she argued that the ethnocentric claims of social Darwinists and the Anglo-Saxon-driven Americanization movement at the turn of the century combined to produce a strong push for “industrial” schooling, ultimately relegating the poorer minority students to vocational programs and a differentiated curriculum which she considered a lingering pattern in 20th century schools.

Some studies suggest that tracking can influence students’ peer groups and attitudes regarding other students. Adam Gamoran’s study (1992) shows that students are more likely to form friendships with other students in the same tracks than with students outside of their tracks. Since low-class and minority students are overrepresented in low tracks, and Whites and Asians generally dominate higher tracks, interaction among these groups can be discouraged by tracking. However, there is no research showing an academic benefit to low track students from such interaction.

Tracking is not uncommon in the United States and can take many forms at any level of compulsory schooling. Did you experience tracking at your school? This student Ted talk explains some of the adverse consequences of separating students into high-performing, average, and below-average tracks: Student Tracking Needs to End.

To conflict theorists, schools play the role of training working-class students to accept and retain their position as lower-tier members of society. They argue that this role is fulfilled through the disparity of resources available to students in richer and poorer neighborhoods as well as through testing (Lauen and Tyson 2008). Did you know that a school’s resources are dependent on property taxes in the school district’s boundaries? This is a controversial policy, as it contributes to existing inequalities in the home and in the the neighborhood.

IQ tests have been attacked for being biased—for testing cultural knowledge rather than actual intelligence. For example, a test item may ask students what instruments belong in an orchestra. To correctly answer this question requires certain cultural knowledge—knowledge most often held by more affluent people who typically have more exposure to orchestral music. Though experts in the field of testing claim that bias has been eliminated from tests, conflict theorists maintain that this is impossible. These tests, to conflict theorists, are another way in which education does not so much provide opportunities as maintain established configurations of power.

This NPR article, Why America’s Schools Have A Money Problem, explains more about inequalities in public schools created by differences in revenue generated through property taxes. 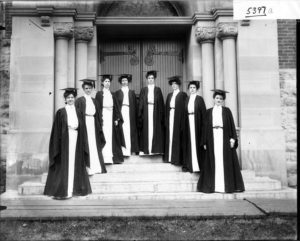 Feminist theory aims to understand the mechanisms and roots of gender inequality, particularly in education, as well as their societal repercussions. Like many other institutions of society, educational systems are characterized by unequal treatment and opportunity for women, despite the monumental progress that has been made in recent decades. The literacy rate among women worldwide is 83 percent, compared to the almost 90 percent observed for men,[1] and women around the world are still less likely than men to set foot in a school.[2]

Women in the United States have been relatively late, historically speaking, to be granted entry to the public university system. In fact, it wasn’t until the establishment of Title IX of the Education Amendments in 1972 that discriminating on the basis of sex in U.S. education programs became illegal. In the United States, there is also a post-education gender disparity between what male and female college graduates earn, despite women now graduating college at higher rates than men (Citation C). A study released in May 2011 showed that, among men and women who graduated from college between 2006 and 2010, men out-earned women by an average of more than $5,000 each year. First-year job earnings for men averaged $33,150; for women the average was $28,000 (Godofsky, Zukin, and van Horn 2011). Similar trends are seen among salaries of professionals in virtually all industries.[3]

Figure 3. One way to think about the gender pay gap is by looking at the difference in median earnings for men and women.

When women face limited opportunities for education, their capacity to achieve equal rights, including financial independence, is limited. Feminist theory seeks to promote women’s rights to equal education (and its resultant benefits) across the world.

cultural capital:
cultural knowledge that serves (metaphorically) as currency to help one navigate a culture

hidden curriculum:
the type of nonacademic knowledge that people learn through informal learning and cultural transmission

sorting:
classifying students based on academic merit or potential