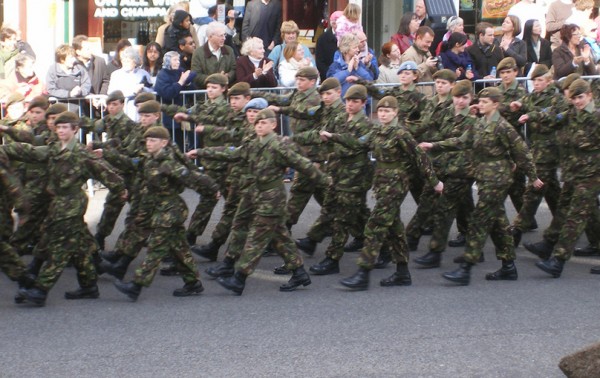 Now that we have learned about different types of groups, let’s examine group dynamics, or the ways in which groups operate, and the impact these groups have on individual members.

A small group is typically one where the collection of people is small enough that all members of the group know each other and share simultaneous interaction, such as a nuclear family, a dyad, or a triad. Georg Simmel (1858–1915) wrote extensively about the difference between a dyad, or two-member group, and a triad, which is a three-member group (Simmel 1902). In the former, if one person withdraws, the group can no longer exist. The intensity is high but stability is low because the dyad is dependent upon both people being committed to the group of two. We can think of a divorce, which effectively ends the “group” of the married couple, or of two best friends never speaking again. In a triad, however, the dynamic is quite different. Intensity is lower but stability is higher because if one person withdraws, the group lives on. A triad has a different set of relationships. If there are three in the group, two-against-one dynamics can develop, and there exists the potential for a majority opinion on any issue. Consider a dyad (couple) that becomes a triad (new baby). We can often see a lessening of the intensity between parents as attention is diverted to a newborn who requires a lot of time and care. Often, the partner who does less caregiving (perhaps the male) feels left out and is less clear about their role in the group (family) and the person who does more caregiving (perhaps the female) might feel pulled too thin and find it difficult to give their partner and the new baby enough time and attention without feeling depleted. Similarly, when couples see their children off to college and experience an “empty nest,” the dyad might feel like a new group with the intensity of a group of two resurfacing and stability decreasing now that children are no longer living in the home.

Small groups generally have strong internal cohesiveness and a sense of connection. The challenge, however, is for small groups to achieve large goals. They can struggle to be heard or to be a force for change if they are pushing against larger groups. In short, they are easier to ignore. It is difficult to define exactly when a small group becomes a large group. Perhaps it occurs when there are too many people to join in a simultaneous discussion. Or perhaps a group joins with other groups as part of a movement that unites them. These larger groups may share a geographic space, such as a fraternity or sorority on the same campus, or they might be spread out around the globe. The larger the group, the more attention it can garner, and the more pressure members can exert in the pursuit of goals the group wishes to achieve. At the same time, the larger the group becomes, the more the risk grows for division and lack of cohesion.

Sociologists study human behavior and social groups, but how do humans behave within these various groups? What social dynamics are at work within them? Most individuals see themselves as their own person, as unique, and as relatively uninfluenced by the outside. In the ongoing “nature versus nurture” debate, sociologists tend toward the nurture explanatory framework, and thus examine the forces around us that shape our behavior. A difficult concept, then, is conformity, which refers to the extent to which an individual complies with group norms or expectations.

Most people will agree that we all like to fit in to some degree. Likewise, when we want to stand out, we want to choose how we stand out and for what reasons. Since societal norms change over time, what was once non-conformist (i.e., tattoos, piercings, leather jackets, and even blue jeans) are now social norms. What was conformist (i.e., smoking cigarettes) is no longer an acceptable social norm in many places. Formal norms have relegated smoking to remote areas, whereas smoking on airplanes, in restaurants, and even in college classrooms was permissible until the 1980s and 1990s in some places (all domestic and international flights first became smoke-free in 2000).

As you might recall, we use reference groups to assess and understand how to act, to dress, and to behave. Not surprisingly, young people are particularly aware of who conforms and who does not. A high school boy whose mother makes him wear ironed button-down shirts might protest that he will look stupid––because everyone else wears T-shirts. Another high school boy might like wearing those shirts as a way of standing out. How much do you enjoy being noticed? Do you consciously prefer to conform to group norms so as not to be singled out? Are there people in your class who immediately come to mind when you think about those who don’t want to conform?

Psychologist Solomon Asch (1907–1996) conducted experiments that illustrated how great the pressure to conform is, specifically within a small group (1956). After reading about his work in the following feature, ask yourself what you would do in Asch’s experiment. Would you speak up? What would help you speak up and what would discourage it?

In 1951, psychologist Solomon Asch sat a small group of about eight people around a table. Only one of the people sitting there was the true subject; the rest were associates of the experimenter. However, the subject was led to believe that the others were all, like him, people brought in for an experiment in visual judgments. The group was shown two cards, the first card with a single vertical line, and the second card with three vertical lines differing in length. The experimenter polled the group and asked each participant one at a time which line on the second card matched up with the line on the first card.

However, this was not really a test of visual judgment. Rather, it was Asch’s study on the pressures of conformity. He was curious to see what the effect of multiple wrong answers would be on the subject, who presumably was able to tell which lines matched. In order to test this, Asch had each planted respondent answer in a specific way. The subject was seated in such a way that he had to hear almost everyone else’s answers before it was his turn. Sometimes the non-subject members would unanimously choose an answer that was clearly wrong.

So what was the conclusion? Asch found that thirty-seven out of fifty test subjects responded with an “obviously erroneous” answer at least once. When faced by a unanimous wrong answer from the rest of the group, the subject conformed to a mean of four of the staged answers. Asch revised the study and repeated it, wherein the subject still heard the staged wrong answers, but was allowed to write down his answer rather than speak it aloud. In this version, the number of examples of conformity––giving an incorrect answer so as not to contradict the group––fell by two thirds. He also found that group size had an impact on how much pressure the subject felt to conform.

The results showed that speaking up when only one other person gave an erroneous answer was far more common than when five or six people defended the incorrect position. Finally, Asch discovered that people were far more likely to give the correct answer in the face of near-unanimous consent if they had a single ally. If even one person in the group also dissented, the subject conformed only a quarter as often. Clearly, it was easier to be a minority of two than a minority of one.

Watch a clip from the experiment here:

Asch concluded that there are two main causes for conformity: people want to be liked by the group or they believe the group is better informed than they are. He found his study results disturbing. To him, they revealed that intelligent, well-educated people would, with very little coaxing, go along with an untruth. He believed this result highlighted real problems with the education system and values in our society (Asch 1956).

Stanley Milgram, a Yale psychologist, had similar results in his experiment that is now known simply as the Milgram Experiment. In 1962, Milgram found that research subjects were overwhelmingly willing to perform acts that directly conflicted with their consciences when directed by a person of authority. In the experiment, subjects were willing to administer painful, even supposedly deadly, electrical shocks to invisible others who answered questions incorrectly.

conformity:
the extent to which an individual complies with group or societal norms