The oldest religion in the world, Hinduism originated in the Indus River Valley about 4,500 years ago in what is now modern-day northwest India and Pakistan. It arose contemporaneously with ancient Egyptian and Mesopotamian cultures. With roughly one billion followers, Hinduism is the third-largest of the world’s religions; its followers, known as Hindus, constitute about 1.15 billion, or 15–16% of the global population. Hinduism is the most widely professed faith in India, Nepal and Mauritius. It is also the predominant religion in Bali, Indonesia. Significant numbers of Hindu communities are also found in the Caribbean, Southeast Asia, North America, Europe, Africa, and other countries.

Most forms of Hinduism are henotheistic, meaning they worship a main single deity, known as Brahman, but still recognize other gods and goddesses such Vishnu, Shiva, and Krishna, among others. Hinduism includes a diversity of ideas on spirituality and traditions, but has no ecclesiastical order, no unquestionable religious authorities, no governing body, no prophet(s) nor any binding holy book (although there are sacred texts).  Hindus can choose to be polytheistic, pantheistic, panentheistic, pandeistic, henotheistic, monotheistic, monistic, agnostic, atheistic or humanist. Because of the wide range of traditions and ideas covered by the term Hinduism, arriving at a comprehensive definition is difficult. Hinduism has been variously defined as a religion, a religious tradition, a set of religious beliefs, and “a way of life.” From a Western lexical standpoint, Hinduism, like other faiths, is appropriately referred to as a religion but in India, the term dharma is preferred, which is broader than the Western term religion.

One of the key thoughts of Hinduism is the belief in the soul, or atman. This philosophy holds that all living creatures have a soul, and all will be reincarnated, which is one reason why many Hindus are vegetarians. The ultimate goal of Hinduism is to achieve moksha, or salvation, which ends the cycle of sorrow, suffering and rebirths (saṃsāra) to become part of the absolute soul, or in complete oneness with God and existence. Hindus also generally believe in a set of principles called dharma, which refers to one’s duty in the world that corresponds with righteous choices and ethical actions. Hindus also believe in karma, or the notion that spiritual ramifications of one’s actions are balanced cyclically in this life or a future life.

The caste system, described in the module on social stratification, is based on the Hindu principles of karma and dharma. This ancient system, estimated by some scholars to be 3,000 years old, divides society into the following four castes: 1) brahmin (the intellectual and spiritual leaders), 2) kshatriyas (the protectors and public servants of society), 3) vaisyas (the skillful producers), and 4) shudras (the unskilled laborers) [1] Although discrimination based on caste was banned with India’s independence from Great Britain in 1947, some traditions such as marrying within one’s caste are still embraced. 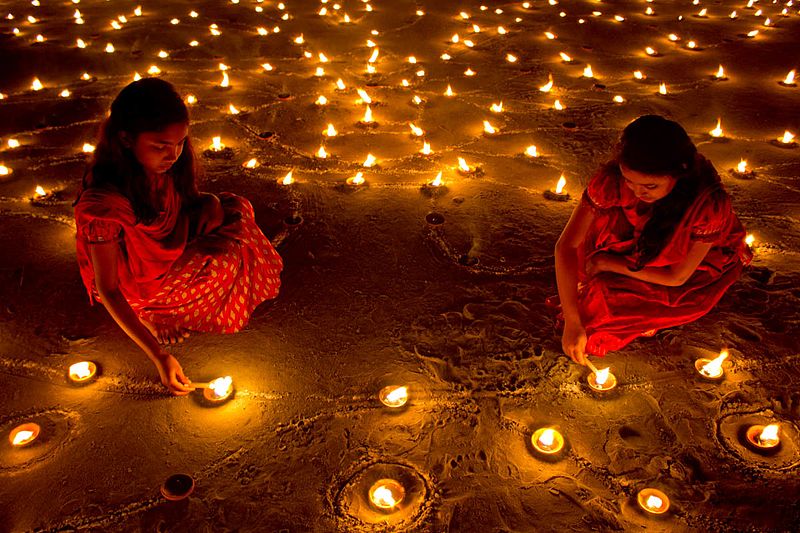 Multiple sacred texts, collectively called the Vedas, were composed around 1500 B.C. and contain hymns and rituals from ancient India. They are mostly written in Sanskrit. Like many other religions, Hinduism was suppressed at various points in India’s history—by Muslim Arabs from 1200 to 1757 and between 1757 and 1848 when the British controlled India [2].

There are several Hindu festivals that are observed, but Diwali, or the festival of lights, is probably the most well known. The five days of Diwali include different rituals such as spring cleaning, shopping, decorating, praying, fasting, gift-giving, and eating, but the focal point of the celebration includes lighting lamps to represent a victory of good over evil and the light that comes from within. Another popular festival is the celebration of the arrival of spring, known as Holi, or the festival of colors, named for the bright colors of powders and water that many throw at others during the celebration.

The most famous Hindu, Mohandas ‘Mahatma’ Gandhi, helped India to gain independence from the British in 1947 before he was assassinated by an extremist Indian nationalist in 1948. After the dissolution of the British Raj in 1947, two new sovereign nations were formed—the Dominion of India and the Dominion of Pakistan. The subsequent partition of the former British India displaced up to 12.5 million people and resulted in conflict and war between the main religions groups, Muslims and Hindus, with estimates of loss of life varying from several hundred thousand to 1 million. India emerged as a secular nation with a Hindu majority population and a large Muslim minority, while Pakistan emerged also as a secular nation with a Muslim majority population and a large Hindu minority.

Learn about the basic beliefs and practices of Hinduism in this short video.

Jainism is another predominantly Indian religion that shares some commonalities with Hinduism, although there are still major distinctions. Followers of Jainism are called “Jains,” a word derived from the Sanskrit word jina (victor) and connoting the path of victory in crossing over life’s stream of rebirths through an ethical and spiritual life. Jains consider their religion to be eternal (sanatan), and trace their history through a succession of 24 victorious saviors and teachers known as tirthankaras. Jains believe that Jainism is an eternal dharma with the tirthankaras guiding every cycle of the Jain cosmology.

The main religious premises of Jainism are ahiṃsā (non-violence), anekāntavāda (many-sidedness), aparigraha (non-attachment) and asceticism. Devout Jains take five main vows: ahiṃsā (non-violence), satya (truth), asteya (not stealing), brahmacharya (celibacy or chastity), and aparigraha (non-attachment). These principles have impacted Jain culture in many ways, such as leading to a predominantly vegetarian lifestyle that avoids harm to animals and their life cycles. “Parasparopagraho Jīvānām” (the function of souls is to help one another) is the motto of Jainism.