Putting It Together: Society and Groups

Groups like political parties are prevalent in our lives and provide a significant way for us to understand and define ourselves as individuals, often based on whether we are for or against the groups in question. Groups also play an important role in society. As enduring social units, they help foster shared value systems and are key to the structure of society as we know it. 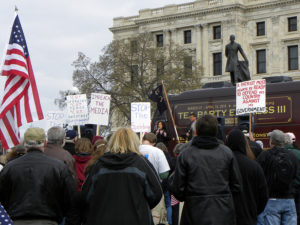 Figure 1. The national tour of the Tea Party Express visited Minnesota and held a rally outside the state capitol building. (Photo courtesy of Fibonacci Blue/flickr).

We can look at the Tea Party movement through the lenses of these methods to better understand the roles and challenges that groups offer. The Tea Party Movement is a conservative movement that began in 2009 after people became upset with President Obama’s tax plans. While the movement’s momentum peaked in 2010 and has declined in influence in recent years, there are still Tea Party chapters in every state. The followers of the Tea Party have charged themselves with calling “awareness to any issue which challenges the security, sovereignty, or domestic tranquility of our beloved nation, the United States of America” (Tea Party, Inc. 2014). The group takes its name from the famous Boston Tea Party of 1773. Its membership includes people from all walks of life who believe they are taking a necessary stand to protect certain values and beliefs. These beliefs tend to be anti-tax, anti-big government, pro-gun, and politically conservative.

In 2016, highly successful Fox News host Gretchen Carlson filed a lawsuit against Fox chairman, Roger Ailes, for sexual harassment. The suit led other women to come forward with similar allegations against Ailes and others in the entertainment industry. Soon after, actress Alyssa Milano posted this statement on Twitter: “If all the women who have been sexually harassed or assaulted wrote ‘Me too’ as a status, we might give people a sense of the magnitude of the problem.” The phrase, “Me Too” had been first used in this context in 2006 by activist Tarana Burke, in an effort to empower women of color. Within a day of Milano’s post, the “Me Too” phrase or hashtag was used over 500,000 times on Twitter, and was used in over 12 million posts by 4.7 million people on Facebook. Thousands of people, including other celebrities, shared their own stories of sexual harassment, abuse, or assault. (MeTooMvmt.org, 2020)

The “MeToo” movement became the lead story on many newscasts and talk shows. Over the months that followed, the movement sparked reforms within companies and governments to combat sexual harassment and better support women. The movement inspired abuse victims to come forward and led to the sanction or removal of prominent individuals accused of serial harassment or abuse in academia, media, government, and other industries.

There are three primary sociological perspectives for studying society and groups: functionalist, conflict, and interactions. The Functionalist perspective is a big-picture, macro-level view that looks at how different aspects of society are intertwined. This perspective is based on the idea that society is a well-balanced system with all parts necessary to the whole, and it studies the roles these parts play in relation to the whole. A Functionalist might look at the macro-level needs that each movement serves. For example, a Structural Functionalist might ask how the Tea Party arose to voice the concerns of a large sector of society that felt politically underrepresented, or how MeToo drove people to pay attention to sexual harassment and gender inequality. This approach might look at how each group enabled the voicing of discontent and so stabilized society.

The Conflict perspective is another macroanalytical view, one that focuses on the genesis and growth of inequality. A conflict theorist studying the Tea Party Movement might look at how it checked interests that have manipulated the political system over the last 30 years. Or this perspective might explore how MeToo challenged organizations that have allowed sexual harassment to persist in order to protect those in power.

A third perspective is the Symbolic Interaction or Interactionist perspective. This method of analyzing groups takes a micro-level view. Instead of studying the big picture, these researchers look at the day-to-day interactions of groups. Studying these details, the Interactionist looks at issues like leadership style and group dynamics. In the case of the Tea Party Movement, Interactionists might ask, “How does the Tea Party dynamic in New York differ from that in Atlanta?” Or, in the case of the MeToo, researchers may seek to learn about who defines the agenda and approach within the movement.

Watch the following video for a review and summary of the theories of society. Consider how a theorist from each of these perspectives may explain the group dynamics surrounding the Yellow Jackets in France.

Sociology is a holistic and interconnected discipline, so even while we are summarizing the contents of this module, you will continue to see overlap in the upcoming modules as we dive into social institutions and explore groups within a variety of macrosociological structures.