A major concern when discussing global inequality is how to avoid an ethnocentric bias implying that less-developed nations want to be like those who’ve attained post-industrial global power. Terms such as developing (nonindustrialized) and developed (industrialized) imply that unindustrialized countries are somehow inferior, and must improve to participate successfully in the “global economy,” a label indicating that all aspects of the economy cross national borders. We must be mindful of how we describe and delineate different countries. Over time, terminology has shifted to enable a more inclusive view of the world.

Global classification methods are not only important in understanding economic differences among countries, but also in providing ways to classify countries and identify trends in other areas. The classifications discussed below will be used in other chapters, such as the chapter on health and medicine.

Cold War terminology was developed during the Cold War era (1945–1991), a period of geopolitical conflict between the democratic, capitalist nations of the world and the more authoritarian communist nations that were primarily controlled by the former U.S.S.R (now, in part, present-day Russia). Familiar and still used by many, it classifies countries into first world, second world, and third world nations based on their respective economic development and standards of living. When this nomenclature was developed, capitalist democracies such as the United States and Japan were considered part of the first world. The poorest, most undeveloped countries were referred to as the third world and included most of sub-Saharan Africa, Latin America, and Asia. Control of these developing countries was often contested between capitalist and communist powers, sometimes with politically and economically destabilizing results. The second world was the economically in-between category: nations not as limited in development as the third world, but not as well off as the first world, having moderate economies and living standards, and typically being aligned with the communist powers. Much of Eastern Europe, China, and Cuba are key examples. In addition to these earlier categories, sociologist Manual Castells (1998) added the term fourth world to refer to stigmatized minority groups that were denied a political voice all over the globe (indigenous minority populations, prisoners, and the homeless, for example).

Immanuel Wallerstein’s (1979) world systems approach uses an economic basis to understand global inequality. Wallerstein conceived of the global economy as a complex system that supports an economic hierarchy placing some nations in positions of power with considerable resources while placing other nations in a state of economic subordination. Those that were in a state of subordination faced significant obstacles to development and self-determination.

Core nations are dominant capitalist countries, highly industrialized, technological, and urbanized. For example, Wallerstein contends that the United States is an economic powerhouse that can support or deny support to important economic legislation with far-reaching implications, thus exerting control over every aspect of the global economy and exploiting both semi-peripheral and peripheral nations. We can look at free trade agreements such as the 1994 North American Free Trade Agreement (NAFTA) as an example of how a core nation is able to leverage its power to gain the most advantageous position within the system of global trade.

Peripheral nations have very little industrialization; what they do have often represents the outdated castoffs of core nations or the factories and means of production owned by core nations. They typically have unstable governments, inadequate social programs, and are economically dependent on core nations for jobs and aid. There are abundant examples of countries in this category, such as Vietnam and Cuba. We can be sure the workers in Cuban cigar factories, for example, which are owned or leased by global core nation companies, are not enjoying the same privileges and rights as U.S. workers.

Semi-peripheral nations are in-between nations, not powerful enough to dictate policy but nevertheless acting as a major source for raw material and an expanding middle-class marketplace for core nations, while also exploiting peripheral nations. Mexico is an example, providing abundant cheap agricultural labor to the U.S., and supplying goods to the United States market at a rate dictated by the U.S. without the legal protections offered to United States workers.

While the World Bank is often criticized, both for its policies and its method of calculating data, it is still a common source for global economic data.

Along with tracking the economy, the World Bank tracks demographics and environmental health to provide a complete picture of whether a nation is high income, middle income, or low income.

The World Bank defines high-income nations as having a gross national income of at least $12,536 per capita. in 2019 (World Bank 2021). (Note that the classifications will always lag by a couple of years so that analysts can evaluate the true income of the nations.) Examples include Belgium, Canada, Japan, Oman, Puerto Rico, and the United States.

High-income countries face two major issues: capital flight and deindustrialization. Capital flight refers to the movement (flight) of capital from one nation to another, as when General Motors automotive company closed U.S. factories in Michigan and opened factories in Mexico.

Deindustrialization, a related issue, occurs as a consequence of capital flight, as no new companies open to replace jobs lost to foreign nations. As expected, global companies move their industrial processes to the places where they can get the most production with the least cost, including the building of infrastructure, training of workers, shipping of goods, and, of course, paying employee wages. This means that as emerging economies create their own industrial zones, global companies see the opportunity for existing infrastructure and much lower costs. Those opportunities lead to businesses closing the factories that provide jobs to the middle class within core nations and moving their industrial production to peripheral and semi-peripheral nations.

Perhaps the most pressing issue for middle-income nations is the problem of debt accumulation. As the name suggests, debt accumulation is the buildup of external debt, wherein countries borrow money from other nations to fund their expansion or growth goals. As the uncertainties of the global economy make repaying these debts, or even paying the interest on them, more challenging, nations can find themselves in trouble. Once global markets have reduced the value of a country’s goods, it can be very difficult to ever manage the debt burden. Such issues have plagued middle-income countries in Latin America and the Caribbean, as well as East Asian and Pacific nations (Dogruel and Dogruel 2007).

The World Bank defines low-income countries as nations whose per capita GNI was $1,035 per capita or less in 2019. For example, Afghanistan, Ethiopia, and Yemen are considered low-income countries. Low-income economies are primarily found in Asia and Africa (World Bank 2021), where most of the world’s population lives. There are two major challenges that these countries face: women are disproportionately affected by poverty (in a trend toward a global feminization of poverty) and much of the population lives in extreme poverty.

Nations’ classifications often change as their economies evolve and, sometimes, when their political positions change. Nepal, Indonesia, and Romania all moved up to a higher status based on improved economies. While Sudan, Algeria, and Sri Lanka moved down a level. A few years ago, Myanmar was a low-income nation, but now it has moved into the middle-income area. With Myanmar’s 2021 coup, the massive citizen response, and the military’s killing of protesters, its economy may go through a downturn again, returning it to the low-income nation status.

How is global stratification measured?

Just as the United States’ wealth is increasingly concentrated among its richest citizens while the middle class slowly disappears, global inequality is concentrating resources in certain nations and is significantly affecting the opportunities of individuals in poorer and less powerful countries. In fact, a recent Oxfam (2014) report suggested that the richest eighty-five people in the world are worth more than the poorest 3.5 billion combined.

Various models of global stratification all have one thing in common: they rank countries according to their relative economic status, or gross national product (GNP).

There are three primary ways to measure global stratification: 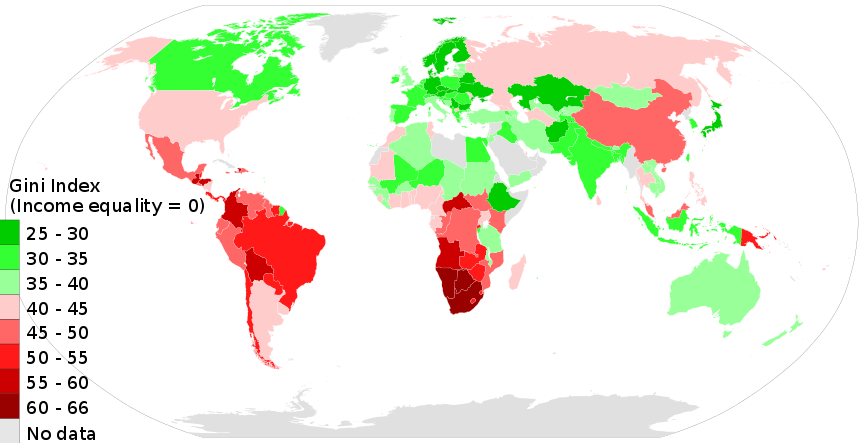 Because costs of goods and services vary from one country to the next, the GNI PPP converts figures into a relative international unit. Calculating GNI PPP figures helps researchers accurately compare countries’ standard of living. They allow the United Nations and Population Reference Bureau to compare and rank the wealth of all countries and consider international stratification issues. 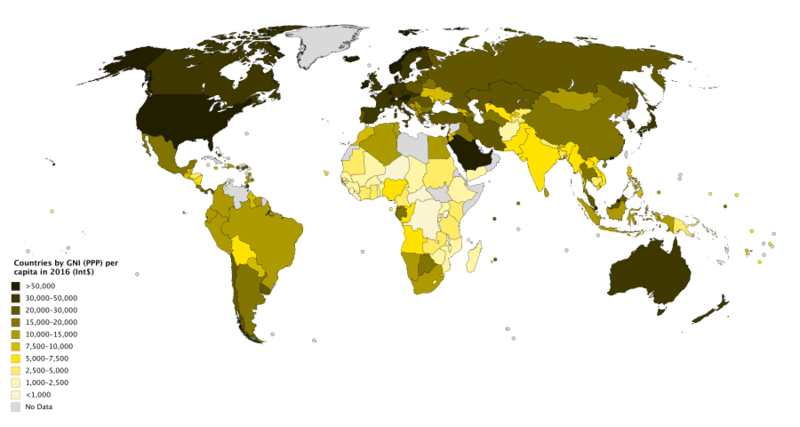 Watch the selected first few minutes of this video (around the 4 minute and thirty second mark) to learn about social classification, and how and why these categories developed. We’ll finish the video when we learn more about poverty in a later section.

To learn more about the existence and impact of global poverty, peruse the data at The World Bank Poverty & Equity Data.

first world:
a term from the Cold War era (1945-1991) that is used to describe industrialized capitalist nations

global stratification:
a comparison of the wealth, economic stability, status, and power of countries as a whole

second world:
a term from the Cold War era (1945-1991) that describes nations with moderate economies and standards of living which were aligned with communist state power during that period

standard of living:
the level of wealth available to acquire material goods and comforts to maintain a particular socioeconomic lifestyle

third world:
a term from the Cold War era (1945-1991) that refers to poor, unindustrialized countries that were often not aligned with either capitalist or communist state power during that period