Behavioral geneticists study how individual differences arise, in the present, through the interaction of genes and the environment. When studying human behavior, behavioral geneticists often employ twin and adoption studies to research questions of interest. Twin studies compare the rates that a given behavioral trait is shared among identical and fraternal twins; adoption studies compare those rates among biologically related relatives and adopted relatives. Both approaches provide some insight into the relative importance of genes and environment for the expression of a given trait.

For decades, scholars have carried on the “nature/nurture” debate. For any particular feature, those on the “nature” side would argue that heredity plays the most important role in bringing about that feature. Those on the “nurture” side would argue that one’s environment is most significant in shaping the way we are. This debate continues in questions about what makes us masculine or feminine (Lippa, 2002), concerns about vision (Mutti, Kadnik, & Adams, 1996), and many other developmental issues.

Most scholars agree that there is a constant interplay between the two forces. It is difficult to isolate the root of any single behavior as a result solely of nature or nurture, and most scholars believe that even determining the extent to which nature or nurture impacts a human feature is difficult to answer. In fact, almost all human features are polygenic (a result of many genes) and multifactorial (a result of many factors, both genetic and environmental). It is as if one’s genetic make-up sets up a range of possibilities, which may or may not be realized depending upon one’s environmental experiences. For instance, a person might be genetically predisposed to develop diabetes, but the person’s lifestyle may help bring about the disease.

When you think about your own family history, it is easy to see that there are certain personality traits, behavioral characteristics, and medical conditions that are more common than others. This is the reason that doctors ask you about your family medical history. While genetic predisposition is important to consider, there are some family members who, for a variety of reasons, seemed to defy the odds of developing these conditions. These differences can be explained in part by the effect of epigenetic (above the genome) changes.

This video explains some of the research that gives insights into the complicated relationship between nature and nurture.

You can view the transcript for “Epigenetics: Nature vs nurture” here (opens in new window).

The term “epigenetic” has been used in developmental psychology to describe psychological development as the result of an ongoing, bi-directional interchange between heredity and the environment. Gottlieb (1998; 2000; 2002) suggests an analytic framework for the nature/nurture debate that recognizes the interplay between the environment, behavior, and genetic expression. This bidirectional interplay suggests that the environment can affect the expression of genes just as genetic predispositions can impact a person’s potentials. Likewise, environmental circumstances can trigger symptoms of a genetic disorder. For example, a person predisposed genetically for type 2 diabetes may trigger the disease through poor diet and little exercise.

The developmental psychologist Erik Erikson wrote of an epigenetic principle in his book Identity: Youth and Crisis (1968), encompassing the notion that we develop through an unfolding of our personality in predetermined stages, and that our environment and surrounding culture influence how we progress through these stages. This biological unfolding in relation to our socio-cultural settings is done in stages of psychosocial development, where “progress through each stage is in part determined by our success, or lack of success, in all the previous stages.”

In typical human families, children’s biological parents raise them, so it is very difficult to know whether children act like their parents due to genetic (nature) or environmental (nurture) reasons. Nevertheless, despite our restrictions on setting up human-based experiments, we do see real-world examples of nature-nurture at work in the human sphere—though they only provide partial answers to our many questions. The science of how genes and environments work together to influence behavior is called behavioral genetics. The easiest opportunity we have to observe this is the adoption study. When children are put up for adoption, the parents who give birth to them are no longer the parents who raise them. Children aren’t assigned to random adoptive parents in order to suit the particular interests of a scientist but adoption still tells us some interesting things, or at least confirms some basic expectations. For instance, if the biological child of tall parents were adopted into a family of short people, do you suppose the child’s growth would be affected? What about the biological child of a Spanish-speaking family adopted at birth into an English-speaking family? What language would you expect the child to speak? And what might these outcomes tell you about the difference between height and language in terms of nature-nurture?

Sometimes two eggs or ova are released and fertilized by two separate sperm. The result is dizygotic or fraternal twins. About two-thirds of twins are dizygotic. These two individuals share the same amount of genetic material as would any two children from the same mother and father. Older mothers are more likely to have dizygotic twins than are younger mothers and couples who use fertility drugs are also more likely to give birth to dizygotic twins. Consequently, there has been an increase in the number of fraternal twins in recent years (Bortolus et al., 1999). In vitro fertilization (IVF) techniques are more likely to create dizygotic twins. For IVF deliveries, there are nearly 21 pairs of twins for every 1,000. 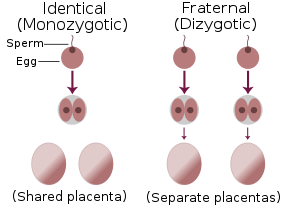 Monozygotic (one egg/identical) twins can be categorized into four types depending on the timing of the separation and duplication of cells. Various types of chorionicity and amniosity (how the baby’s sac looks) in monozygotic twins are a result of when the fertilized egg divides. This is known as placentation. 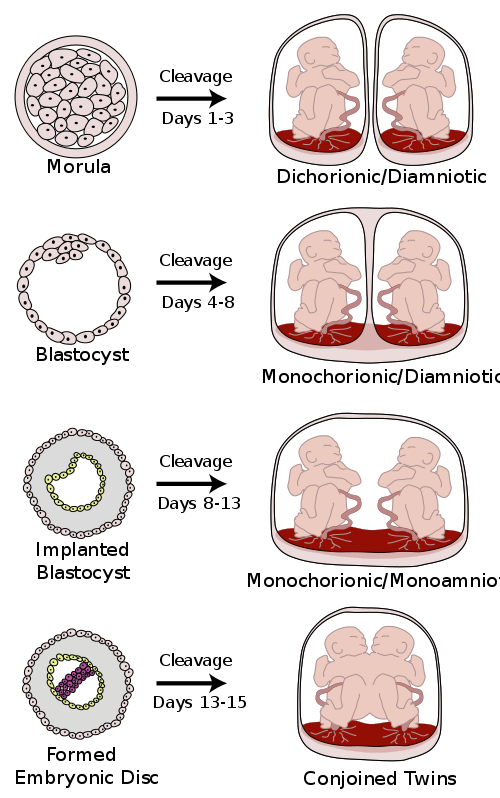 Figure 2. Various types of chorionicity and amniosity (how the baby’s sac looks) in monozygotic (one egg/identical) twins as a result of when the fertilized egg divides (Author Kevin Dufenbach)

Conjoined twins are monozygotic twins whose bodies are joined together during pregnancy. This occurs when the zygote starts to split after day 12 following fertilization and fails to separate completely. This condition occurs in about 1 in 50,000 human pregnancies. Most conjoined twins are now evaluated for surgery to attempt to separate them into separate functional bodies. The degree of difficulty rises if a vital organ or structure is shared between twins, such as the brain, heart or liver.

Researchers suspect that as many as 1 in 8 pregnancies start out as multiples, but only a single fetus is brought to full term because the other fetus has died very early in the pregnancy and has not been detected or recorded. Early obstetric ultrasonography exams sometimes reveal an “extra” fetus, which fails to develop and instead disintegrates and vanishes in the uterus. There are several reasons for the “vanishing” fetus, including it being embodied or absorbed by the other fetus, placenta or the mother. This is known as vanishing twin syndrome. Also, in an unknown proportion of cases, two zygotes may fuse soon after fertilization, resulting in a single chimeric embryo, and, later, fetus.

Using the features of height and spoken language as examples, let’s take a look at how nature and nurture apply: identical twins, unsurprisingly, are almost perfectly similar for height. The heights of fraternal twins, however, are like any other sibling pairs: more similar to each other than to people from other families, but hardly identical. This contrast between twin types gives us a clue about the role genetics plays in determining height. 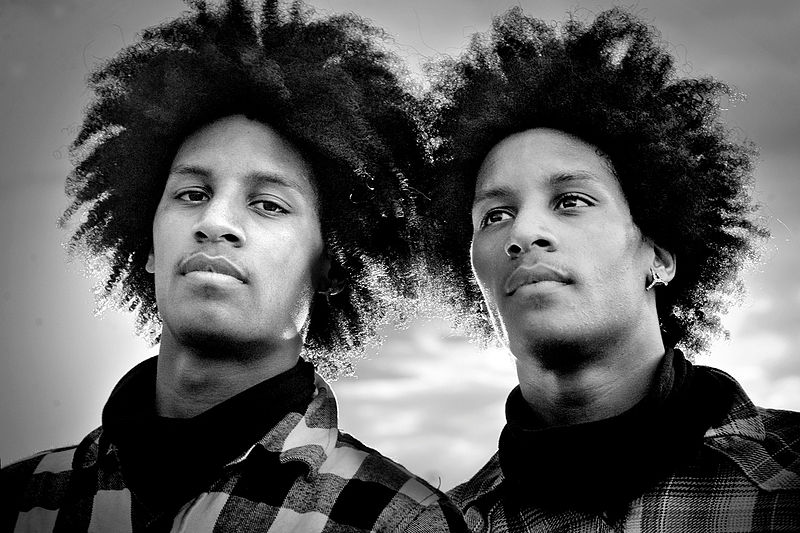 Twin and adoption studies are two instances of a much broader class of methods for observing nature-nurture called quantitative genetics, the scientific discipline in which similarities among individuals are analyzed based on how biologically related they are. We can do these studies with siblings and half-siblings, cousins, and twins who have been separated at birth and raised separately (Bouchard, Lykken, McGue, & Segal, 1990). Such twins are very rare and play a smaller role than is commonly believed in the science of nature–nurture, or with entire extended families (Plomin, DeFries, Knopik, & Neiderhiser, 2012).

It would be satisfying to be able to say that nature–nurture studies have given us conclusive and complete evidence about where traits come from, with some traits clearly resulting from genetics and others almost entirely from environmental factors, such as child-rearing practices and personal will; but that is not the case. Instead, everything has turned out to have some footing in genetics. The more genetically-related people are, the more similar they are—for everything: height, weight, intelligence, personality, mental illness, etc. Sure, it seems like common sense that some traits have a genetic bias. For example, adopted children resemble their biological parents even if they have never met them, and identical twins are more similar to each other than are fraternal twins. And while certain psychological traits, such as personality or mental illness (e.g., schizophrenia), seem reasonably influenced by genetics, it turns out that the same is true for political attitudes, how much television people watch (Plomin, Corley, DeFries, & Fulker, 1990), and whether or not they get divorced (McGue & Lykken, 1992).

adoption study:
a behavior genetic research method that involves the comparison of adopted children to their adoptive and biological parents
amniotic sac:
a fluid-filled sac that protects and contains the fetus in the uterus
behavioral genetics:
the empirical science of how genes and environments combine to generate behavior
dizygotic:
derived from two separate ova
epigenetics:
the study of heritable phenotype changes that do not involve alterations in the DNA sequence; the prefix epi- means above
monozygotic:
derived from a single ovum
placenta:
an organ that develops in the uterus during pregnancy to provide oxygen and nutrients to the fetus
quantitative genetics:
scientific and mathematical methods for inferring genetic and environmental processes based on the degree of genetic and environmental similarity among organisms
twin studies:
a behavior genetic research method that involves a comparison of the similarity of identical (monozygotic; MZ) and fraternal (dizygotic; DZ) twins