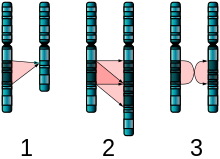 Another common cause of chromosomal abnormalities occurs because the gametes do not divide evenly when they are forming. Therefore, some cells have more than 46 chromosomes. In fact, it is believed that close to half of all zygotes have an odd number of chromosomes. Most of these zygotes fail to develop and are spontaneously aborted by the body. If the abnormal number occurs on pair # 21 or # 23, however, the individual may have certain physical or other abnormalities.

An altered chromosome structure may take several different forms, and result in various disorders or malignancies:

One of the most common chromosomal abnormalities is on pair # 21. Trisomy 21 occurs when there are three rather than two chromosomes on #21. A person with Down syndrome has distinct facial features, intellectual disability, and oftentimes heart and gastrointestinal disorders. Symptoms vary from person to person and can range from mild to severe. With early intervention, the life expectancy of persons with Down syndrome has increased in recent years. Keep in mind that there is as much variation in people with Down Syndrome as in most populations and those differences need to be recognized and appreciated.

You can view the transcript for “Down Syndrome – Ability Awareness PSA Video” here (opens in new window).

When the chromosomal abnormality is on pair #23, the result is a sex-linked chromosomal abnormality. A person might have XXY, XYY, XXX, XO, or 45 or 47 chromosomes as a result. Two of the more common sex-linked chromosomal disorders are Turner syndrome and Klinefelter syndrome. Turner’s syndrome occurs in 1 of every 2,500 live female births (Carroll, 2007) when an ovum which lacks a chromosome is fertilized by a sperm with an X chromosome. The resulting zygote has an XO composition. Fertilization by a Y sperm is not viable. Turner syndrome affects cognitive functioning and sexual maturation. The external genitalia appear normal, but breasts and ovaries do not develop fully and the woman does not menstruate. Turner’s syndrome also results in short stature and other physical characteristics.  Klinefelter syndrome (XXY) occurs in 1 out of 700 live male births and results when an ovum containing an extra X chromosome is fertilized by a Y sperm. The Y chromosome stimulates the growth of male genitalia, but the additional X chromosome inhibits this development. An individual with Klinefelter syndrome has some breast development, infertility (this is the most common cause of infertility in males), and has low levels of testosterone.

Prenatal testing consists of prenatal screening and prenatal diagnosis, which are aspects of prenatal care that focus on detecting problems with the pregnancy as early as possible. These may be anatomic and physiologic problems with the health of the zygote, embryo, or fetus, either before gestation even starts or as early in gestation as practical. Prenatal screening focuses on finding problems among a large population with affordable and noninvasive methods. The most common screening procedures are routine ultrasounds, blood tests, and blood pressure measurement. Prenatal diagnosis focuses on pursuing additional detailed information once a particular problem has been found, and can sometimes be more invasive.

Common prenatal diagnosis procedures include amniocentesis and chorionic villus sampling. Because of the miscarriage and fetal damage risks associated with amniocentesis and CVS procedures, many women prefer to first undergo screening so they can find out if the fetus’ risk of birth defects is high enough to justify the risks of invasive testing. Screening tests yield a risk score which represents the chance that the baby has the birth defect; the most common threshold for high-risk is 1:270. A risk score of 1:300 would, therefore, be considered low-risk by many physicians. However, the trade-off between the risk of birth defects and risk of complications from invasive testing is relative and subjective; some parents may decide that even a 1:1000 risk of birth defects warrants an invasive test while others wouldn’t opt for an invasive test even if they had a 1:10 risk score.

There are three main purposes of prenatal diagnosis: (1) to enable timely medical or surgical treatment of a condition before or after birth, (2) to give the parents the chance to abort a fetus with the diagnosed condition, and (3) to give parents the chance to prepare psychologically, socially, financially, and medically for a baby with a health problem or disability, or for the likelihood of a stillbirth. Having this information in advance of birth means that healthcare staff, as well as parents, can better prepare themselves for the delivery of a child with a health problem. For example, Down Syndrome is associated with cardiac defects that may need intervention immediately upon birth.

The American College of Obstetricians and Gynecologists (ACOG) guidelines currently recommend that all pregnant women, regardless of age, be offered invasive testing to obtain a definitive diagnosis of certain birth defects. Therefore, most physicians offer diagnostic testing to all their patients, with or without prior screening and let the patient decide.

Watch this video to learn more about prenatal testing and screening during pregnancy.

You can view the transcript for “Screening in Pregnancy” here (opens in new window).