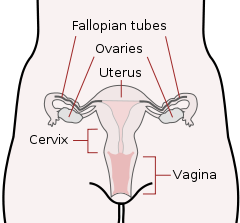 There are two types of sex cells or gametes involved in reproduction: the male gametes, or sperm, and female gametes, or ova. The male gametes are produced in the testes through a process called spermatogenesis, which begins at about 12 years of age. The female gametes, which are stored in the ovaries, are present at birth but are immature. Each ovary contains about 250,000 ova but only about 400 of these will become mature eggs (Mackon & Fauser, 2000; Rome, 1998). Beginning at puberty, one ovum ripens and is released about every 28 days, a process called oogenesis.

After the ovum or egg ripens and is released from the ovary, it is drawn into the fallopian tube and in 3 to 4 days, reaches the uterus. It is typically fertilized in the fallopian tube and continues its journey to the uterus. At ejaculation, millions of sperm are released into the vagina, but only a few reach the egg and typically, only one fertilizes the egg. Once a single sperm has entered the wall of the egg, the wall becomes hard and prevents other sperm from entering. After the sperm has entered the egg, the tail of the sperm breaks off and the head of the sperm, containing the genetic information from the father, unites with the nucleus of the egg. As a result, a new cell is formed. This cell, containing the combined genetic information from both parents, is referred to as a zygote.

Watch as one single sperm survives the long and treacherous journey to fertilize the mother’s egg.

You can view the transcript for “Fertilization” here (opens in new window).

While other normal human cells have 46 chromosomes (or 23 pair), gametes contain 23 chromosomes. Chromosomes are long threadlike structures found in a cell nucleus that contain genetic material known as deoxyribonucleic acid (DNA). DNA is a helix-shaped molecule made up of nucleotide base pairs [adenine (A), guanine (G), cytosine (C), and thymine (T)]. In each chromosome, sequences of DNA make up genes that control or partially control a number of visible characteristics, known as traits, such as eye color, hair color, and so on. A single gene may have multiple possible variations or alleles. An allele is a specific version of a gene. So, a given gene may code for the trait of hair color, and the different alleles of that gene affect which hair color an individual has. 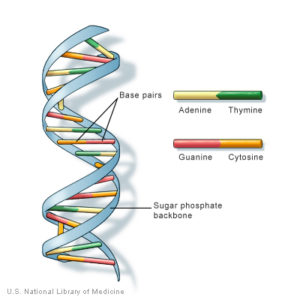 Figure 2. Deoxyribonucleic acid (DNA) is a helix-shaped molecule made up of nucleotide base pairs. Sequences of DNA make up genes.

In a process called meiosis, segments of the chromosomes from each parent form pairs and genetic segments are exchanged as determined by chance. Because of the unpredictability of this exchange, the likelihood of having offspring that are genetically identical (and not twins) is one in trillions (Gould & Keeton, 1997). Genetic variation is important because it allows a species to adapt so that those who are better suited to the environment will survive and reproduce, which is an important factor in natural selection.

When a sperm and egg fuse, their 23 chromosomes pair up and create a zygote with 23 pairs of chromosomes. Therefore, each parent contributes half the genetic information carried by the offspring; the resulting physical characteristics of the offspring (called the phenotype) are determined by the interaction of genetic material supplied by the parents (called the genotype). A person’s genotype is the genetic makeup of that individual. Phenotype, on the other hand, refers to the individual’s inherited physical characteristics.

Look in the mirror. What do you see, your genotype or your phenotype? What determines whether or not genes are expressed? Actually, this is quite complicated. Some features follow the additive pattern which means that many different genes contribute to a final outcome. Height and skin tone are examples. In other cases, a gene might either be turned on or off depending on several factors, including the gene with which it is paired or the inherited epigenetic tags.

You can view the transcript for “MEIOSIS – MADE SUPER EASY – ANIMATION” here (opens in new window).

Visit the webpage “What are DNA and Genes?” from the University of Utah to better understand DNA and genes, then watch the video “What is Inheritance?” to learn how the genes from parents pass on genetic information to their children.

Determining the Sex of the Child

Many potential parents have a clear preference for having a boy or a girl and would like to determine the sex of the child. Through the years, a number of tips have been offered for the potential parents to maximize their chances for having either a son or daughter as they prefer. For example, it has been suggested that sperm which carry a Y chromosome are more fragile than those carrying an X. So, if a couple desires a male child, they can take measures to maximize the chance that the Y sperm reaches the egg. This involves having intercourse 48 hours after ovulation, which helps the Y sperm have a shorter journey to reach the egg, douching to create a more alkaline environment in the vagina, and having the female reach orgasm first so that sperm are not pushed out of the vagina during orgasm. Today, however, there is new technology available that makes it possible to isolate sperm containing either an X or a Y, depending on the preference, and use that sperm to fertilize a mother’s egg.

Genetic variation, the genetic difference between individuals, is what contributes to a species’ adaptation to its environment. In humans, genetic variation begins with an egg, several million sperm, and fertilization. The egg and the sperm each contain 23 chromosomes, which make up our genes. A single gene may have multiple possible variations or alleles (a specific version of a gene), resulting in a variety of combinations of inherited traits.

Genetic inheritance of traits for humans is based upon Gregor Mendel’s model of inheritance. For genes on an autosome (any chromosome other than a sex chromosome), the alleles and their associated traits are autosomal dominant or autosomal recessive. In this model, some genes are considered dominant because they will be expressed. Others, termed recessive, are only expressed in the absence of a dominant gene. Some characteristics which were once thought of as dominant-recessive, such as eye color, are now believed to be a result of the interaction between several genes (McKusick, 1998). Dominant traits include curly hair, facial dimples, normal vision, and dark hair. Recessive characteristics include red hair, pattern baldness, and nearsightedness.

In this example, we will call the normal gene “N,” and the gene for cystic fibrosis “c.” The normal gene is dominant, which means that having the dominant allele either from one parent (Nc) or both parents (NN) will always result in the phenotype associated with the dominant allele. When someone has two copies of the same allele, they are said to be homozygous for that allele. When someone has a combination of alleles for a given gene, they are said to be heterozygous. For example, cystic fibrosis is a recessive disease which means that an individual will only have the disease if they are homozygous for that recessive allele (cc). 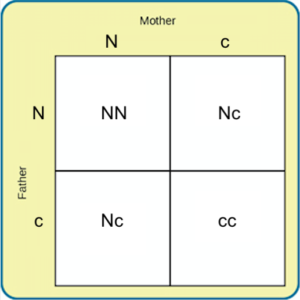 Figure 3. A Punnett square is a tool used to predict how genes will interact in the production of offspring. The capital N represents the dominant allele, and the lowercase c represents the recessive allele. In the example of the cystic fibrosis, where N is the normal gene (dominant allele), wherever a pair contains the dominant allele, N, you can expect a phenotype that does not express the disease. You can expect a cystic fibrosis phenotype only when there are two copies of the c (recessive allele) which contains the gene mutation that causes the disease.

Where do harmful genes that contribute to diseases like cystic fibrosis come from? Gene mutations provide one source of harmful genes. A mutation is a sudden, permanent change in a gene. While many mutations can be harmful or lethal, once in a while a mutation benefits an individual by giving that person an advantage over those who do not have the mutation. Recall that the theory of evolution asserts that individuals best adapted to their particular environments are more likely to reproduce and pass on their genes to future generations. In order for this process to occur, there must be competition—more technically, there must be variability in genes (and resultant traits) that allow for variation in adaptability to the environment. If a population consisted of identical individuals, then any dramatic changes in the environment would affect everyone in the same way, and there would be no variation in selection. In contrast, diversity in genes and associated traits allows some individuals to perform slightly better than others when faced with environmental change. This creates a distinct advantage for individuals best suited for their environments in terms of successful reproduction and genetic transmission.

This video demonstrates another example of the interaction of alleles using the Punnett square.

You can view the transcript for “An Introduction to Mendelian Genetics | Biomolecules | MCAT | Khan Academy” here (opens in new window).

allele:
a specific version of a gene
chromosome:
a DNA molecule with part or all of the genetic material of an organism
deoxyribonucleic acid (DNA):
a helix-shaped molecule made up of nucleotide base pairs
gamete:
a male or female reproductive cell
genes:
sequences of DNA that control or partially control a number of characteristics
genotype:
the genetic makeup of an individual
heterozygous:
a combination of alleles for a given gene
homozygous:
having two copies of the same allele for a given gene
mutation:
a sudden permanent change in a gene
phenotype:
the individual’s inherited physical characteristics