Good prenatal care is essential. The developing child is most at risk for some of the most severe problems during the first three months of development. Unfortunately, this is a time at which most mothers are unaware that they are pregnant. It is estimated that 10% of all birth defects are caused by a prenatal exposure or teratogen. Teratogens are factors that can contribute to birth defects which include some maternal diseases, drugs, alcohol, and stress. These exposures can also include environmental and occupational exposures. Today, we know many of the factors that can jeopardize the health of the developing child. Teratogen-caused birth defects are potentially preventable.

The study of factors that contribute to birth defects is called teratology. Teratogens are usually discovered after an increased prevalence of a particular birth defect. For example, in the early 1960’s, a drug known as thalidomide was used to treat morning sickness. Exposure of the fetus during this early stage of development resulted in cases of phocomelia, a congenital malformation in which the hands and feet are attached to abbreviated arms and legs.

A Look at Some Teratogens 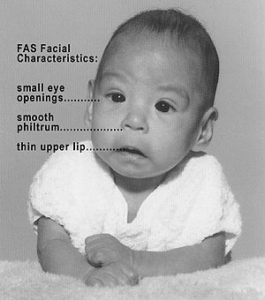 Figure 1. Some distinguishing characteristics of fetal alcohol spectrum disorders include more narrow eye openings, A smooth philtrum, meaning a smooth area between the upper lip and the nose, and a thin upper lip.

One of the most commonly used teratogens is alcohol. Because half of all pregnancies in the United States are unplanned, it is recommended that women of child-bearing age take great caution against drinking alcohol when not using birth control and when pregnant (Surgeon General’s Advisory on Alcohol Use During Pregnancy, 2005). Alcohol consumption, particularly during the second month of prenatal development, but at any point during pregnancy, may lead to neurocognitive and behavioral difficulties that can last a lifetime.

There is no acceptable safe limit for alcohol use during pregnancy, but binge drinking (5 or more drinks on a single occasion) or having 7 or more drinks during a single week places a child at particularly high risk. In extreme cases, alcohol consumption can lead to fetal death, but more frequently it can result in fetal alcohol spectrum disorders (FASD). This terminology is now used when looking at the effects of exposure and replaces the term fetal alcohol syndrome. It is preferred because it recognizes that symptoms occur on a spectrum and that all individuals do not have the same characteristics. Children with FASD share certain physical features such as flattened noses, small eye openings, small heads, intellectual developmental delays, and behavioral problems. Those with FASD are more at risk for lifelong problems such as criminal behavior, psychiatric problems, and unemployment (CDC, 2006).

The terms alcohol-related neurological disorder (ARND) and alcohol-related birth defects (ARBD) have replaced the term Fetal Alcohol Effects to refer to those with less extreme symptoms of FASD. ARBD include kidney, bone and heart problems.

You can view the transcript for “NOFAS Topics: Light Drinking” here (opens in new window).

Smoking is also considered a teratogen because nicotine travels through the placenta to the fetus. When the mother smokes, the developing baby experiences a reduction in blood oxygen levels. Tobacco use during pregnancy has been associated with low birth weight, placenta previa, birth defects, preterm delivery, fetal growth restriction, and sudden infant death syndrome. Smoking in the month before getting pregnant and throughout pregnancy increases the chances of these risks. Quitting smoking before getting pregnant is best. However, for women who are already pregnant, quitting as early as possible can still help protect against some health problems for the mother and baby.[1]

Prescription, over-the-counter, or recreational drugs can have serious teratogenic effects. In general, if medication is required, the lowest dose possible should be used. Combination drug therapies and first trimester exposures should be avoided. Almost three percent of pregnant women use illicit drugs such as marijuana, cocaine, Ecstasy and other amphetamines, and heroin. These drugs can cause low birth-weight, withdrawal symptoms, birth defects, or learning or behavioral problems. Babies born with a heroin addiction need heroin just like an adult addict. The child will need to be gradually weaned from the heroin under medical supervision; otherwise, the child could have seizures and die.

Environmental chemicals can include an exposure to a wide array of agents including pollution, organic mercury compounds, herbicides, and industrial solvents. Some environmental pollutants of major concern include lead poisoning, which is connected with low birth weight and slowed neurological development. Children who live in older housing in which lead-based paints have been used have been known to eat peeling paint chips thus being exposed to lead. The chemicals in certain herbicides are also potentially damaging. Radiation is another environmental hazard that a pregnant woman must be aware of. If a mother is exposed to radiation, particularly during the first three months of pregnancy, the child may suffer some congenital deformities. There is also an increased risk of miscarriage and stillbirth. Mercury leads to physical deformities and intellectual disabilities (Dietrich, 1999).

Sexually transmitted infections (STIs) can complicate pregnancy and may have serious effects on both the mother and the developing baby. Most prenatal care today includes testing for STIs, and early detection is important. STIs, such as chlamydia, gonorrhea, syphilis, trichomoniasis and bacterial vaginosis can all be treated and cured with antibiotics that are safe to take during pregnancy. STIs that are caused by viruses, like genital herpes, hepatitis B, or HIV cannot be cured. However, in some cases these infections can be treated with antiviral medications or other preventive measures can be taken to reduce the risk of passing the infection to the baby.[2]

Maternal illnesses increase the chance that a baby will be born with a birth defect or have a chronic health problem. Some of the diseases that are known to potentially have an adverse effect on the fetus include: diabetes, cytomegalovirus, toxoplasmosis, Rubella, varicella, hypothyroidism, and Strep B. If the mother contracts Rubella during the first three months of pregnancy, damage can occur in the eyes, ears, heart, or brain of the unborn child. On a positive note, Rubella has been nearly eliminated in the industrial world due to the vaccine created in 1969. Diagnosing these diseases early and receiving appropriate medical care can help improve the outcomes. Routine prenatal care now includes screening for gestational diabetes and Strep B.[3]

Stress represents the effects of any factor able to threaten the homeostasis of an organism; these either real or perceived threats are referred to as the “stressors” and comprise a long list of potentially adverse factors, which can be emotional or physical. Because of a link in blood supply between a mother and fetus, it has been found that stress can leave lasting effects on a developing fetus, even before a child is born. The best-studied outcomes of fetal exposure to maternal prenatal stress are preterm birth and low birth weight. Maternal prenatal stress is also considered responsible for a variety of changes of the child’s brain, and a risk factor for conditions such as behavioral problems, learning disorders, high levels of anxiety, attention deficit hyperactivity disorder, autism, and schizophrenia. Furthermore, maternal prenatal stress has been associated with a higher risk for a variety of immune and metabolic changes in the child such as asthma, allergic disorders, cardiovascular diseases, hypertension, hyperlipidemia, diabetes, and obesity.[4]

There are several considerations in determining the type and amount of damage that might result from exposure to a particular teratogen (Berger, 2004). These include: 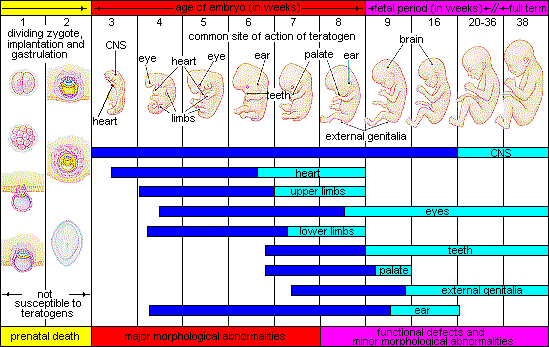 Did you know that pregnant women can improve outcomes for themselves and their babies through a balanced diet and adequate exercise? Click through this interactive to learn more about the importance of maternal health.

teratogen:
any agent which can cause a birth defect
fetal alcohol spectrum disorders:
a group of abnormalities in babies born to mothers who consume alcohol during pregnancy