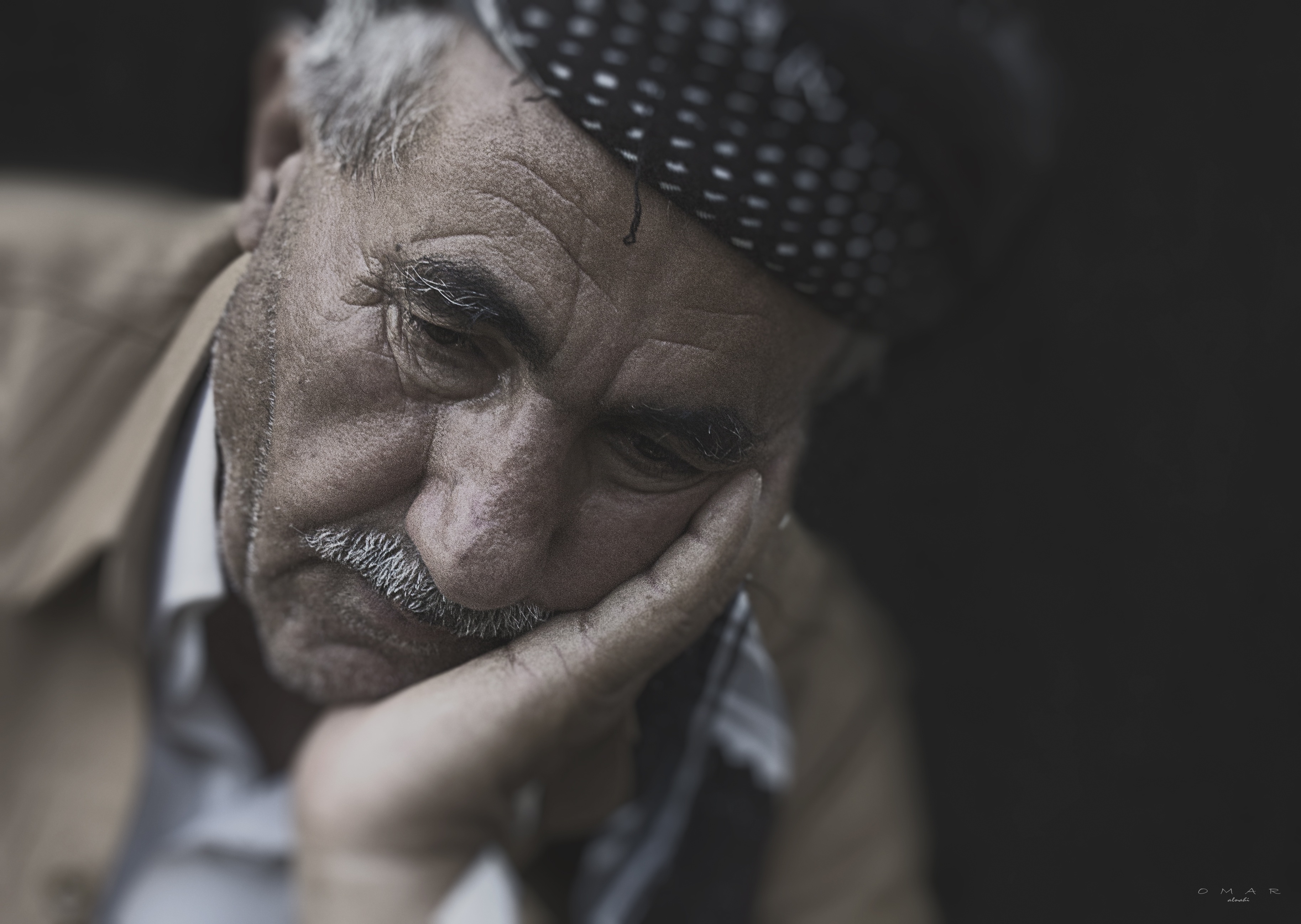 Figure 1. Secondary aging refers to the aspects of aging that are not universally shared by everyone, but are brought about by disease or chronic illness.

In the United States, nearly one in two Americans (133 million) has at least one chronic medical condition, with most subjects (58%) between the ages of 18 and 64. The number is projected to increase by more than one percent per year by 2030, resulting in an estimated chronically ill population of 171 million. The most common chronic conditions are high blood pressure, arthritis, respiratory diseases like emphysema, and high cholesterol.

According to research by the Centers for Disease Control and Prevention, chronic disease is also especially a concern in the elderly population in America. Chronic diseases like stroke, heart disease, and cancer are among the leading causes of death among Americans aged 65 or older. While the majority of chronic conditions are found in individuals between the ages of 18 and 64, it is estimated that at least 80% of older Americans are currently living with some form of a chronic condition, with 50% of this population having two or more chronic conditions. The two most common chronic conditions in the elderly are high blood pressure and arthritis, with diabetes, coronary heart disease, and cancer also being reported at high rates among the elderly population. The presence of type 2 diabetes, high blood pressure, and obesity, is termed “metabolic syndrome” and impacts 50% of individuals over the age of 60.[1]

Heart disease is the leading cause of death from chronic disease for adults older than 65, followed by cancer, stroke, diabetes, chronic lower respiratory diseases, influenza and pneumonia, and, finally, Alzheimer’s disease (which we’ll examine further when we talk about cognitive decline). Though the rates of chronic disease differ by race for those living with chronic illness, the statistics for leading causes of death among elderly are nearly identical across racial/ethnic groups.

The underlying mechanisms vary depending on the disease. Coronary artery disease, stroke, and peripheral artery disease involve atherosclerosis. This may be caused by high blood pressure, smoking, diabetes mellitus, lack of exercise, obesity, high blood cholesterol, poor diet, and excessive alcohol consumption, among others. High blood pressure is estimated to account for approximately 13% of CVD deaths, while tobacco accounts for 9%, diabetes 6%, lack of exercise 6% and obesity 5%.

It is estimated that up to 90% of CVD may be preventable. Prevention of CVD involves improving risk factors through: healthy eating, exercise, avoidance of tobacco smoke and limiting alcohol intake. Treating risk factors, such as high blood pressure, blood lipids and diabetes is also beneficial. The use of aspirin in people, who are otherwise healthy, is of unclear benefit.

Age in itself is one of the most important risk factors for developing cancer. Currently, 60% of newly diagnosed malignant tumors and 70% of cancer deaths occur in people aged 65 years or older. Many cancers are linked to aging; these include breast, colorectal, prostate, pancreatic, lung, bladder and stomach cancers. Men over 75 have the highest rates of cancer at 28 percent. Women 65 and older have rates of 17 percent. Rates for older non-Hispanic Whites are twice as high as for Hispanics and non-Hispanic Blacks. The most common types of cancer found in men are prostate and lung cancer. Breast and lung cancer are the most common forms in women. 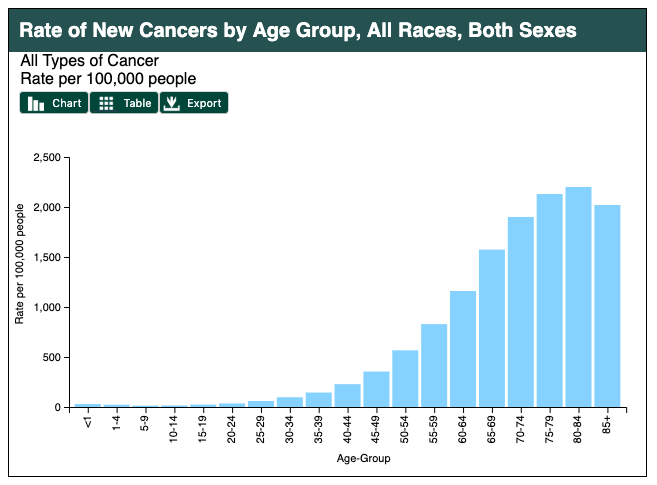 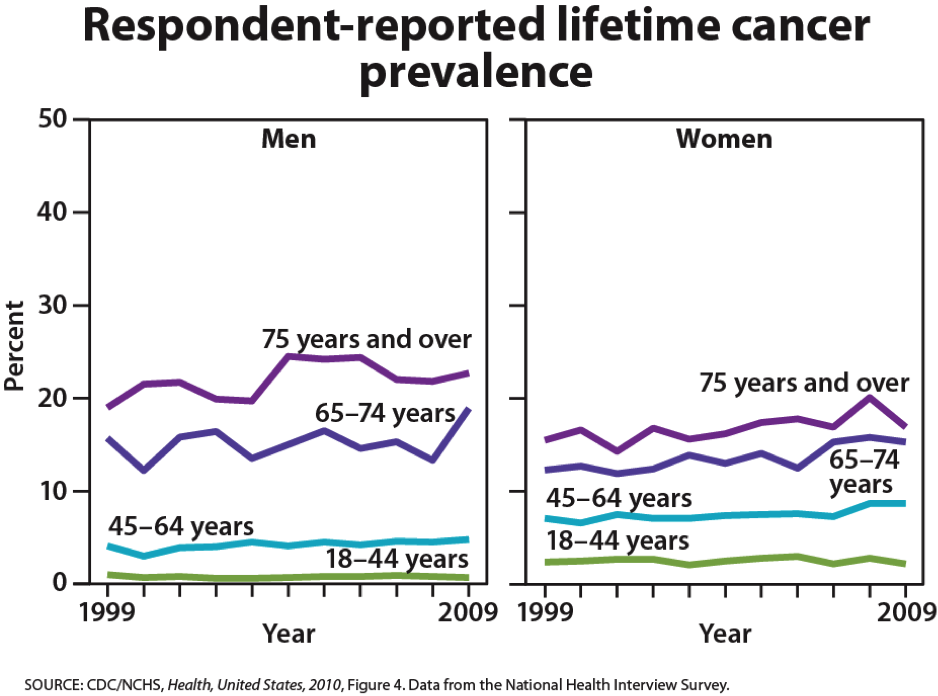 Figure 3. Cancer rates are significantly higher for those above age 65, and is more common in men than in women.

Hypertension or high blood pressure and associated heart disease and circulatory conditions increase with age. Stroke is a leading cause of death and severe, long-term disability. Most people who’ve had a first stroke also had high blood pressure (HBP or hypertension).High blood pressure damages arteries throughout the body, creating conditions where they can burst or clog more easily. Weakened arteries in the brain, resulting from high blood pressure, increase the risk for stroke—which is why managing high blood pressure is critical to reduce the chance of having a stroke. Hypertension disables 11.1 percent of 65 to 74 year olds and 17.1 percent of people over 75. Rates are higher among women and blacks. Rates are highest for women over 75. Coronary disease and stroke are higher among older men than women. The incidence of stroke is lower than that of coronary disease, but it is the No. 5 cause of death and a leading cause of disability in the United States.[2][3]

While arthritis can affect children, it is predominantly a disease of the elderly. Arthritis is more common in women than men at all ages and affects all races, ethnic groups and cultures. In the United States a CDC survey based on data from 2007–2009 showed 22.2% (49.9 million) of adults aged ≥18 years had self-reported doctor-diagnosed arthritis, and 9.4% (21.1 million or 42.4% of those with arthritis) had arthritis-attributable activity limitation (AAAL). With an aging population, this number is expected to increase.

Arthritis is a term often used to mean any disorder that affects joints. Symptoms generally include joint pain and stiffness. Other symptoms may include redness, warmth, swelling, and decreased range of motion of the affected joints. In some types of arthritis, other organs are also affected. Onset can be gradual or sudden.

Treatment may include resting the joint and alternating between applying ice and heat. Weight loss and exercise may also be useful. Pain medications such as ibuprofen and paracetamol (acetaminophen) may be used. In some a joint replacement may be useful. 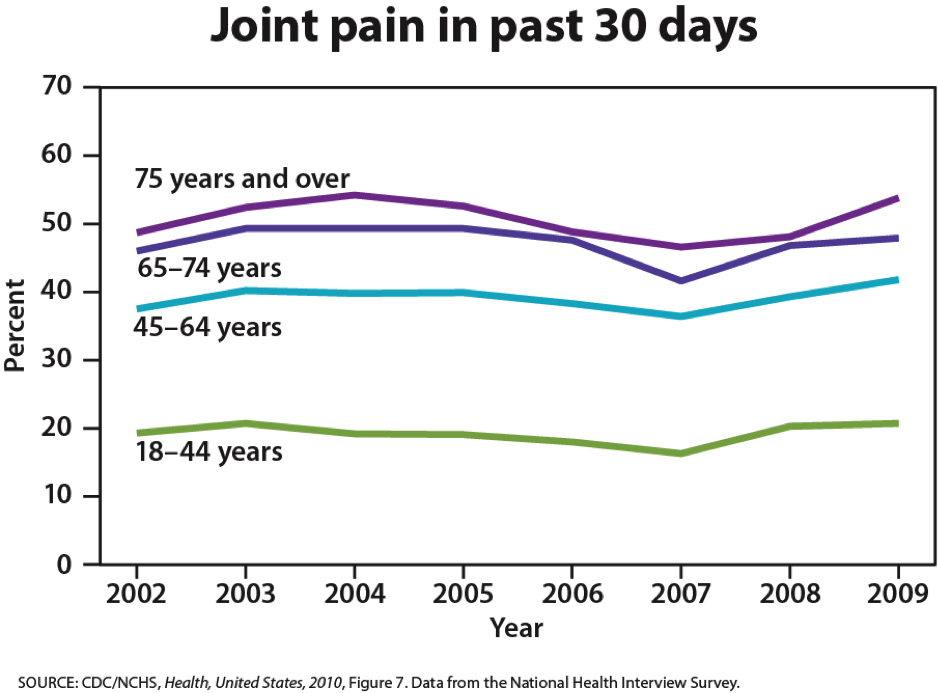 Visit this statistical fact sheet from the American Heart Association to learn more about some facts and figures related to heart disease.

Type 2 diabetes (T2D), formerly known as adult-onset diabetes, is a form of diabetes characterized by high blood sugar, insulin resistance, and relative lack of insulin. Common symptoms include increased thirst, frequent urination, and unexplained weight loss. Symptoms may also include increased hunger, feeling tired, and sores that do not heal. Often symptoms come on slowly. Long-term complications from high blood sugar include heart disease, strokes, diabetic retinopathy which can result in blindness, kidney failure, and poor blood flow in the limbs which may lead to amputations.

Type 2 diabetes primarily occurs as a result of obesity and lack of exercise. Some people are more genetically at risk than others. Type 2 diabetes makes up about 90% of cases of diabetes, with the other 10% due primarily to type 1 diabetes and gestational diabetes. In type 1 diabetes there is a lower total level of insulin to control blood glucose, due to an autoimmune induced loss of insulin-producing beta cells in the pancreas. Diagnosis of diabetes is by blood tests such as fasting plasma glucose, oral glucose tolerance test, or glycated hemoglobin (A1C).

Type 2 diabetes is partly preventable by staying a normal weight, exercising regularly, and eating properly. Treatment involves exercise and dietary changes. If blood sugar levels are not adequately lowered, the medication metformin is typically recommended. Many people may eventually also require insulin injections. In those on insulin, routinely checking blood sugar levels is advised; however, this may not be needed in those taking pills. Bariatric surgery often improves diabetes in those who are obese.

Rates of type 2 diabetes have increased markedly since 1960 in parallel with obesity. As of 2015 there were approximately 392 million people diagnosed with the disease compared to around 30 million in 1985. Typically it begins in middle or older age, although rates of type 2 diabetes are increasing in young people. Type 2 diabetes is associated with a ten-year-shorter life expectancy. 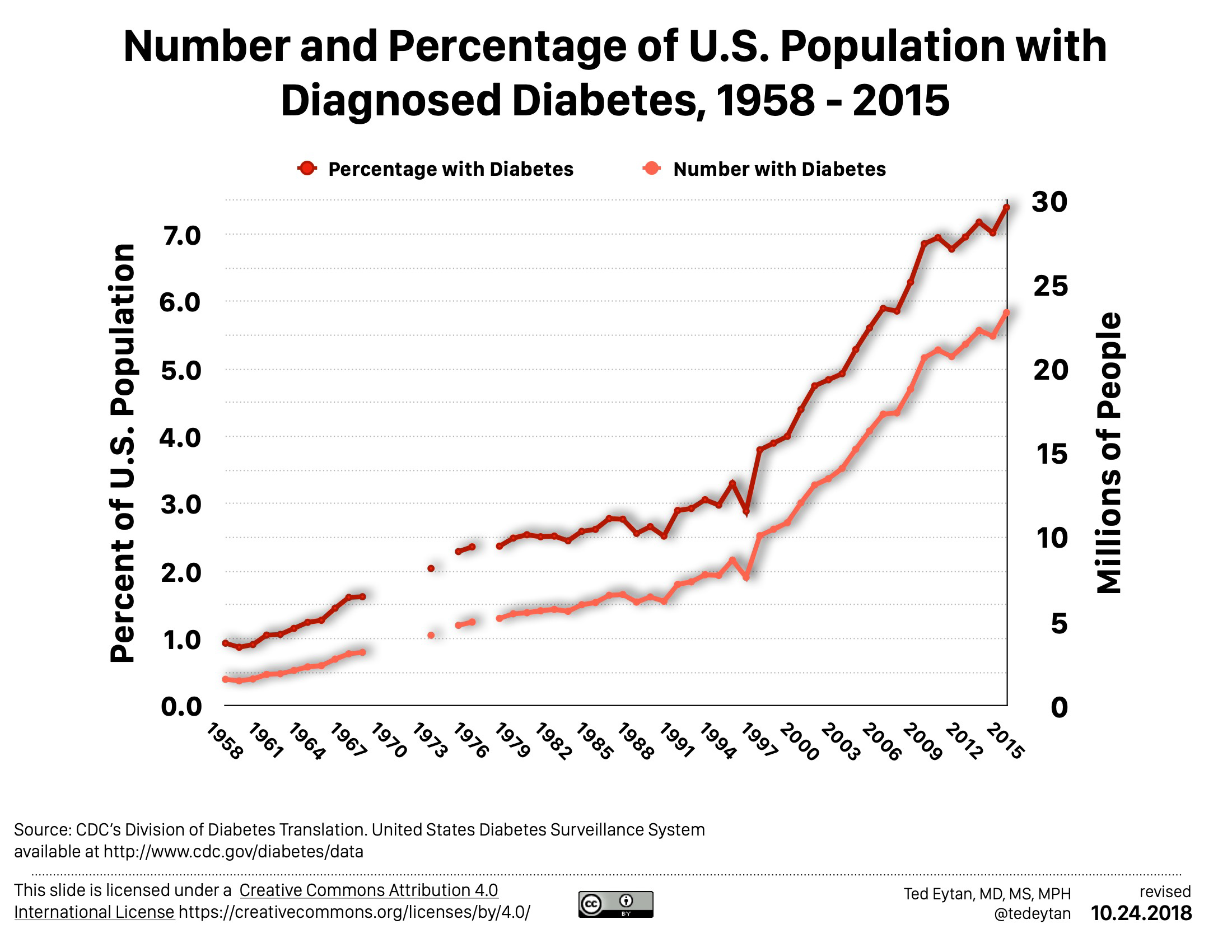 Osteoporosis comes from the Greek word for “porous bones” and is a disease in which bone weakening increases the risk of a broken bone. It is defined as having a bone density of 2.5 standard deviations below that of a healthy young adult. Osteoporosis increases with age as bones become brittle and lose minerals. It is the most common reason for a broken bone among the elderly.

Osteoporosis becomes more common with age. About 15% of white people in their 50s and 70% of those over 80 are affected. It is four times more likely to affect women than men—in the developed world, depending on the method of diagnosis, 2% to 8% of males and 9% to 38% of females are affected. In the United States in 2010, about eight million women and one to two million men had osteoporosis. White and Asian people are at greater risk are more likely to have osteoporosis than non-Hispanic blacks.

Parkinson’s disease (PD) is a long-term degenerative disorder of the central nervous system which mainly affects the motor system, although as the disease worsens, non-motor symptoms become increasingly common. Early in the disease, the most obvious symptoms are shaking, rigidity, slowness of movement, and difficulty with walking, but thinking and behavioral problems may also occur. Dementia becomes common in the advanced stages of the disease, and depression and anxiety also occur in more than a third of people with PD.

The cause of Parkinson’s disease is generally unknown, but believed to involve both genetic and environmental factors. Those with a family member affected are more likely to get the disease themselves. There is also an increased risk in people exposed to certain pesticides and among those who have had prior head injuries, while there is a reduced risk in tobacco smokers (though smokers are at a substantially greater risk of stroke) and those who drink coffee or tea. The motor symptoms of the disease result from the death of cells in the substantia nigra, a region of the midbrain, which results in not enough dopamine in these areas. The reason for this cell death is poorly understood, but involves the build-up of proteins into Lewy bodies in the neurons.

In 2015, PD affected 6.2 million people and resulted in about 117,400 deaths globally. Parkinson’s disease typically occurs in people over the age of 60, of which about one percent are affected. Males are more often affected than females at a ratio of around 3:2. The average life expectancy following diagnosis is between 7 and 14 years. People with Parkinson’s who have increased the public’s awareness of the condition include actor Michael J. Fox, Olympic cyclist Davis Phinney, and professional boxer Muhammad Ali.

arthritis:
arthritis is inflammation of one or more of the joints, characterized by joint pain and stiffness, which typically worsen with age
hypertension:
high blood pressure that can lead to severe complications and increases the risk of heart disease, stroke, and death
secondary aging:
refers to changes that are caused by illness or disease
osteoporosis:
a condition in which the bones become brittle, fragile, and thin, often brought about by a lack of calcium in the diet
Parkinson’s disease:
long-term degenerative disorder of the central nervous system which mainly affects the motor system, first characterized by shaking, rigidity, slowness of movement, and difficulty with walking, but thinking and behavioral problems may also occur
type 2 diabetes (T2D):
diabetes characterized by high blood sugar, insulin resistance, and relative lack of insulin primarily from obesity or lack of exercise