In 1900, the most common causes of death were infectious diseases, which brought death quickly. Due to advances in healthcare and medicine over the years, this has changed, alongside an increase in average life expectancy. According to national data, chronic diseases, or those in which a slow and steady decline causes health deterioration, were the most common causes of death in the United States in 2016[1] In addition, accidents were more common than in previous years, often resulting in quick or unexpected death. How might this impact the way we think of death, the way we grieve, and the amount of control a person has over their own dying process, in comparison to the infectious diseases that were prevalent in 1900?

The 10 leading causes of death and number of deaths per category in 2016 in the United States are listed below.[2]

Table 1. Leading Causes of Death in the United States

These data reflect both similarities and differences when compared with data from 2004. All of these top causes of death, with the exception of two—accidents and suicides—continue to be related to physical illnesses. Many are linked at least in part to lifestyle choices, including diet, exercise, and substance abuse. Similarly, many are preventable, to some extent, and some are avoidable if the proper actions are taken. Although these causes of death remain the same as they were in 2004, the order changed for several of them by 2016. For example, accidents and unintentional injuries shifted from #5 in 2004 to #3 in 2016. Alzheimer’s disease became slightly more common, moving from #7 in 2004 to #6 in 2016, as did suicide, moving from #11 in 2004 to #10 in 2016. In contrast, strokes became slightly less common, moving from #3 in 2004 to #5 in 2016, along with diabetes, which moved from #6 to #7. Septicemia (blood disease) followed a similar trend, shifting from #10 in 2004. These changes are likely attributable to a variety of factors, including lifestyle choices, social pressures and norms, and changes in responsibilities and obligations.

The COVID‑19 pandemic, also known as the coronavirus pandemic, is an ongoing global pandemic of coronavirus disease 2019 (COVID‑19), caused by severe acute respiratory syndrome coronavirus 2 (SARS‑CoV‑2). The World Health Organization declared the outbreak a Public Health Emergency of International Concern on 30 January 2020 and a pandemic on 11 March. As of March 2022, nearly 450 million have contracted the virus and over 6 million people have died.[3]

Data from 2020 shows that Covid-19 became a top three leading cause of death in the United States during the pandemic, behind only heart disease and cancer.[4] 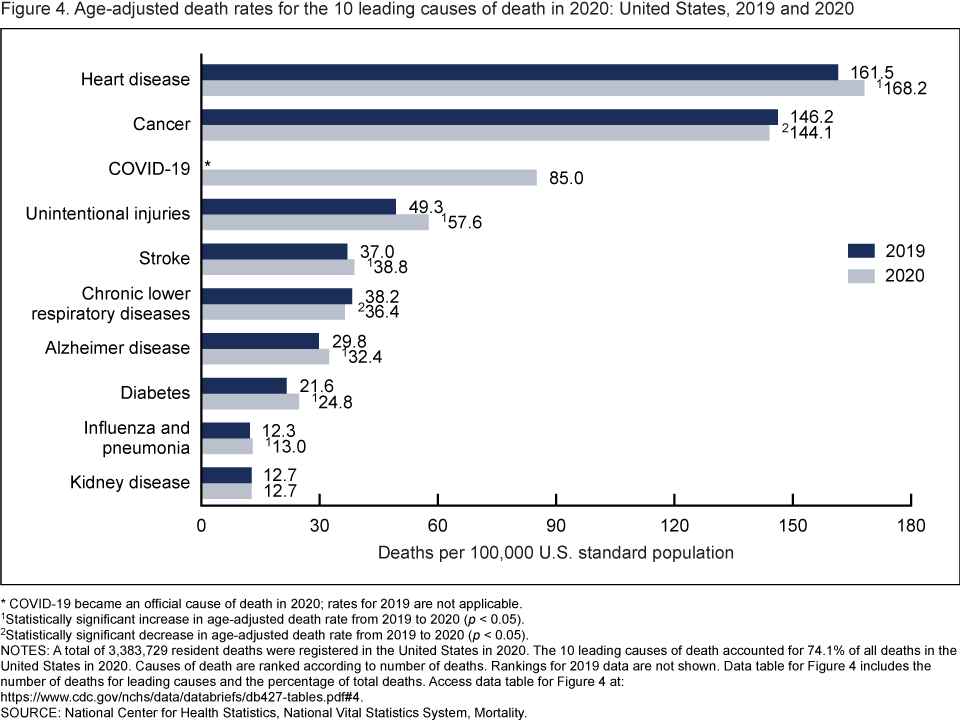 The top 10 deadliest diseases in the world from 2015 are listed below, along with the percentage of deaths for which they were accountable. These reflect disease-related deaths only, and do not reflect deaths due to violence or suicide.[5] Notice there are several similarities between these and the top 10 causes of death in the United States described above.

The top 10 general causes of death in the world remained fairly consistent over the years, despite increases and decreases in each. Deaths caused by heart disease, for example, increased from 2000 by 2.8 million, and deaths caused by stroke increased by .5 million.[6] Lung disorders and cancers also rose by .5 million deaths, while diabetes rose by .6 million. Alzheimer’s disease and other forms of dementia also accounted for an additional .3 million deaths. Decreases were seen in lower respiratory infections, which decreased by .2 million, as well as dehydration due to diarrheal diseases, which decreased by .8 million. Furthermore, tuberculosis deaths decreased by 1 million, and cirrhosis deaths decreased by .2 million.

While the top 10 causes of death presented in Table 1 were only for the United States, these top 10 deadliest diseases are for the entire world, including both developed and undeveloped nations. Differences in various factors including but not limited to economic status, access to medical care, belief systems, and natural resources play a major role in many of these causes of death, and tend to vary substantially between countries. This presents challenges for the interpretation of this list, making it difficult to determine the true prevalence of each in specific locations.

Watch this video to learn about another way to measure and compare life expectancies, known as years of life lost, which measures how many years short of the life expectancy people die. Looking at these data reveals some of the leading causes of death across the globe.

You can view the transcript for “The #1 reason people die early, in each country” here (opens in new window).

A Comparison of Death by Age in the United States 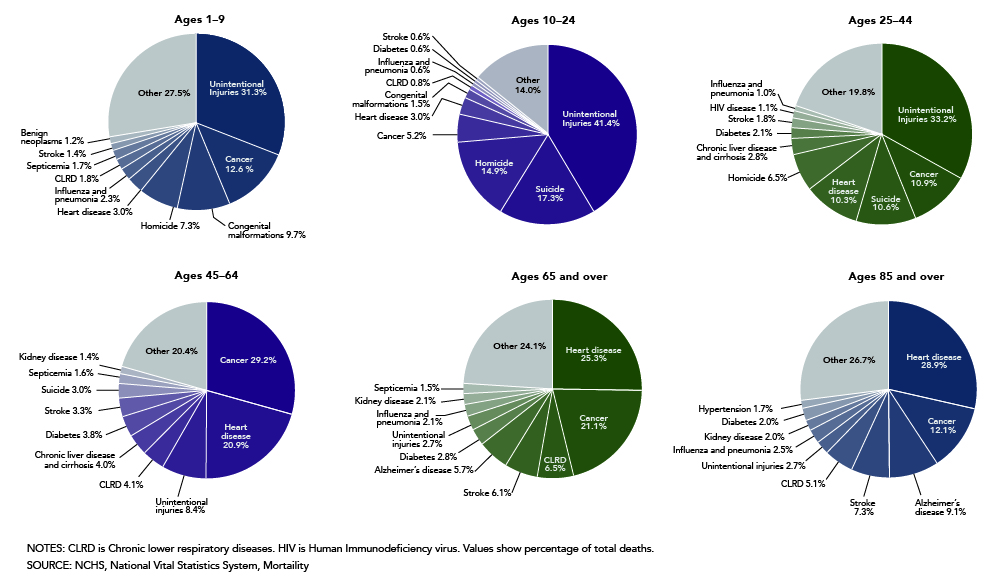 Notice that unintentional injuries are the leading cause of death for the widest variety of ages, and recall from the previous section above that accidents were also found to have become increasingly common as causes of death within the United States population between 2000 and 2016.[7] These were the top causes of death for various age groups in the United States in the year 2016:

Death and The Media 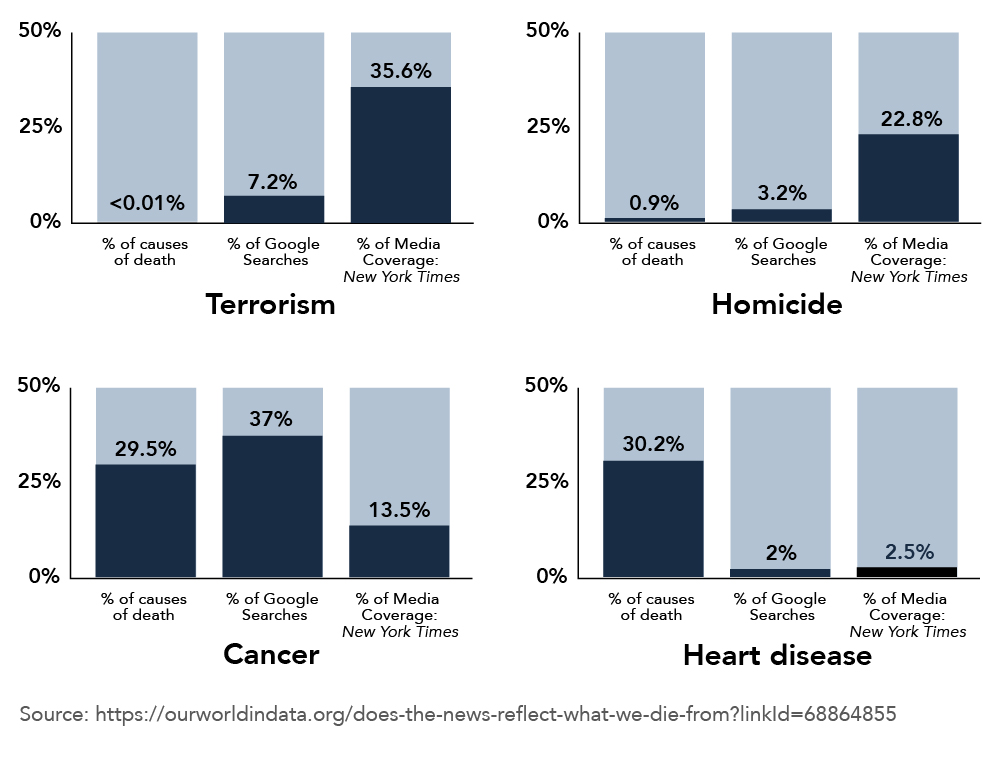 Figure 2. Comparison: Percent Cause of Death, Percent of Google Searches, and Percent of Media Coverage by the New York (2016 Data).

Interestingly, the things that actually result in death are not often the things we hear about on the news.[9] Because of the availability heuristic—a cognitive shortcut in which people rely heavily on information that is most readily available in their mind, people may erroneously be more afraid of sensational deaths than death by more normal causes, such as heart disease.