For the first few days of life, infants typically lose about 5 percent of their body weight as they eliminate waste and get used to feeding. This often goes unnoticed by most parents, but can be cause for concern for those who have a smaller infant. This weight loss is temporary, however, and is followed by a rapid period of growth. By the time an infant is 4 months old, it usually doubles in weight, and by one year has tripled its birth weight. By age 2, the weight has quadrupled. The average length at 12 months (one year old) typically ranges from 28.5-30.5 inches. The average length at 24 months (two years old) is around 33.2-35.4 inches (CDC, 2010).

As mentioned earlier, growth is so rapid in infancy that the consequences of neglect can be severe. For this reason, gains are closely monitored. At each well-baby check-up, a baby’s growth is compared to that baby’s previous numbers. Often, measurements are expressed as a percentile from 0 to 100, which compares each baby to other babies the same age. For example, weight at the 40th percentile means that 40 percent of all babies weigh less, and 60 percent weight more. For any baby, pediatricians and parents can be alerted early just by watching percentile changes. If an average baby moves from the 50th percentile to the 20th, this could be a sign of failure to thrive, which could be caused by various medical conditions or factors in the child’s environment. The earlier the concern is detected, the earlier intervention and support can be provided for the infant and caregiver.

Another dramatic physical change that takes place in the first several years of life is a change in body proportions. The head initially makes up about 50 percent of a person’s entire length when developing in the womb. At birth, the head makes up about 25 percent of a person’s length (just imagine how big your head would be if the proportions remained the same throughout your life!). In adulthood, the head comprises about 15 percent of a person’s length.[2] Imagine how difficult it must be to raise one’s head during the first year of life! And indeed, if you have ever seen a 2- to 4-month-old infant lying on their stomach trying to raise the head, you know how much of a challenge this is.

The Brain in the First Two Years

Communication within the central nervous system (CNS), which consists of the brain and spinal cord, begins with nerve cells called neurons. Neurons connect to other neurons via networks of nerve fibers called axons and dendrites. Each neuron typically has a single axon and numerous dendrites which are spread out like branches of a tree (some will say it looks like a hand with fingers). The axon of each neuron reaches toward the dendrites of other neurons at intersections called synapses, which are critical communication links within the brain. Axons and dendrites do not touch, instead, electrical impulses in the axons cause the release of chemicals called neurotransmitters which carry information from the axon of the sending neuron to the dendrites of the receiving neuron.

While most of the brain’s 100 to 200 billion neurons are present at birth, they are not fully mature. Each neural pathway forms thousands of new connections during infancy and toddlerhood. During the next several years, dendrites, or connections between neurons, will undergo a period of transient exuberance or temporary dramatic growth (exuberant because it is so rapid and transient because some of it is temporary). There is a proliferation of these dendrites during the first two years so that by age 2, a single neuron might have thousands of dendrites. After this dramatic increase, the neural pathways that are not used will be eliminated through a process called pruning, thereby making those that are used much stronger. It is thought that pruning causes the brain to function more efficiently, allowing for mastery of more complex skills (Hutchinson, 2011). Transient exuberance occurs during the first few years of life, and pruning continues through childhood and into adolescence in various areas of the brain. This activity is occurring primarily in the cortex or the thin outer covering of the brain involved in voluntary activity and thinking.

This brief video describes some of the remarkable brain development that takes places in the first few years of life.

You can view the transcript for “How baby brains develop” here (opens in new window). 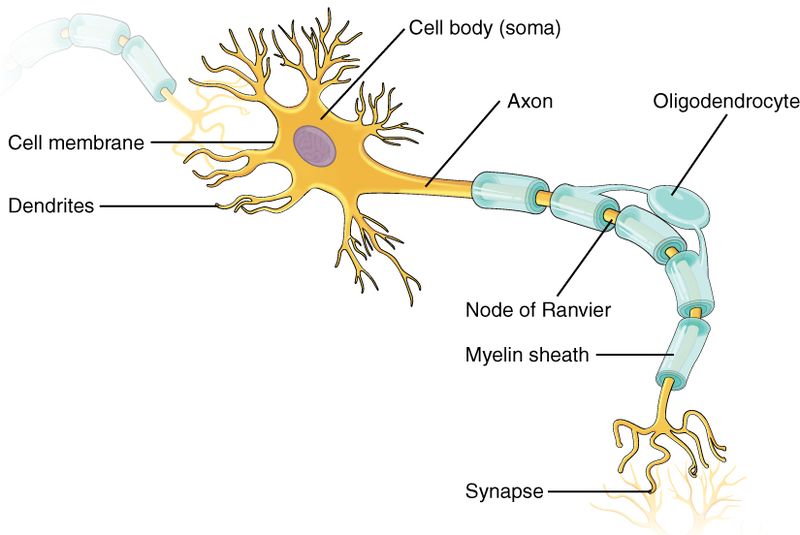 Figure 3. Parts of a neuron.

The prefrontal cortex, located behind the forehead, continues to grow and mature throughout childhood and experiences an addition growth spurt during adolescence. It is the last part of the brain to mature and will eventually comprise 85 percent of the brain’s weight. Experience will shape which of these connections are maintained and which of these are lost. Ultimately, about 40 percent of these connections will be lost (Webb, Monk, & Nelson, 2001). As the prefrontal cortex matures, the child is increasingly able to regulate or control emotions, to plan activity, to strategize, and have better judgment. Of course, this is not fully accomplished in infancy and toddlerhood but continues throughout childhood and adolescence.

Another major change occurring in the central nervous system is the development of myelin, a coating of fatty tissues around the axon of the neuron. Myelin helps insulate the nerve cell and speed the rate of transmission of impulses from one cell to another. This enhances the building of neural pathways and improves coordination and control of movement and thought processes. The development of myelin continues into adolescence but is most dramatic during the first several years of life.

How does all of this brain growth translate into cognitive abilities? We will discuss this later on in the module, but this video provides a nice overview of new research and some of the impressive abilities of newborns.

You can view the transcript for “Babies are Surprisingly Smart” here (opens in new window).

axons:
fibers that extend from the neurons and transmit electrochemical impulses from that neuron to the dendrites of other neurons
cortex:
the outer layers of the brain in humans and other mammals. Most thinking, feeling, and sensing involves the cortex
dendrites:
fibers that extend from neurons and receive electrochemical impulses transmitted from other neurons via their axons
failure to thrive:
decelerated or arrested physical growth (height and weight measurements fall below the third or fifth percentile or a downward change in growth across two major growth percentiles) and is associated with abnormal growth and development
myelin:
a coating of fatty tissues around the axon of the neuron
neurons:
nerve cells in the central nervous system, especially in the brain
neurotransmitters:
brain chemicals that carry information from the axon of a sending neuron to the dendrites of a receiving neuron
percentile:
a point on a ranking scale of 0 to 100. The 50th percentile is the midpoint; half of the infants in the population being studied rank higher and half rank lower
prefrontal cortex:
the area of the cortex at the very front of the brain that specializes in anticipation, planning, and impulse control
pruning:
the process by which unused connections in the brain atrophy and die
synapses:
the intersection between the axon of one neuron to the dendrites of another neuron
transient exuberance:
the great, but temporary increase in the number of dendrites that develop in an infant’s brain during the first two years of life