Sustained long-term economic growth comes from increases in worker productivity, which essentially means how well we do things. In other words, how efficiently does a nation use its workers and other resources? Labor productivity is the output that each employed person creates per unit of his or her time. The easiest way to understand labor productivity is to imagine a Canadian worker who can make 10 loaves of bread in an hour versus a U.S. worker who in the same hour can make only two loaves of bread. In this fictional example, the Canadians are more productive. Being more productive essentially means you can do more in the same amount of time. This in turn frees up resources to be used elsewhere.

What determines how productive workers are? The answer is pretty intuitive. The main determinants of labor productivity are physical capital, human capital, and technological change. These can also be viewed as key components of economic growth.

Another factor that determines labor productivity is technology. Technological change is a combination of invention—advances in knowledge—and innovation, which is putting that advance to use in a new product or service. For example, the transistor was invented in 1947. It allowed us to miniaturize the footprint of electronic devices and use less power than the tube technology that came before it. Innovations since then have produced smaller and better transistors that that are ubiquitous in products as varied as smart-phones, computers, and escalators. The development of the transistor has allowed workers to be anywhere with smaller devices. These devices can be used to communicate with other workers, measure product quality or do any other task in less time, improving worker productivity.

When most people think of new technology, the invention of new products like the laser, the smartphone, or some new wonder drug come to mind. In food production, the development of more drought-resistant seeds is another example of technology. Technology, as economists use the term, however, includes still more. It includes new ways of organizing work, like the invention of the assembly line, new methods for ensuring better quality of output in factories, and innovative institutions that facilitate the process of converting inputs into output. In short, technology comprises all the advances that make the existing machines and other inputs produce more, and at higher quality, as well as altogether new products.

Figure 1 shows an example of the aggregate production function. 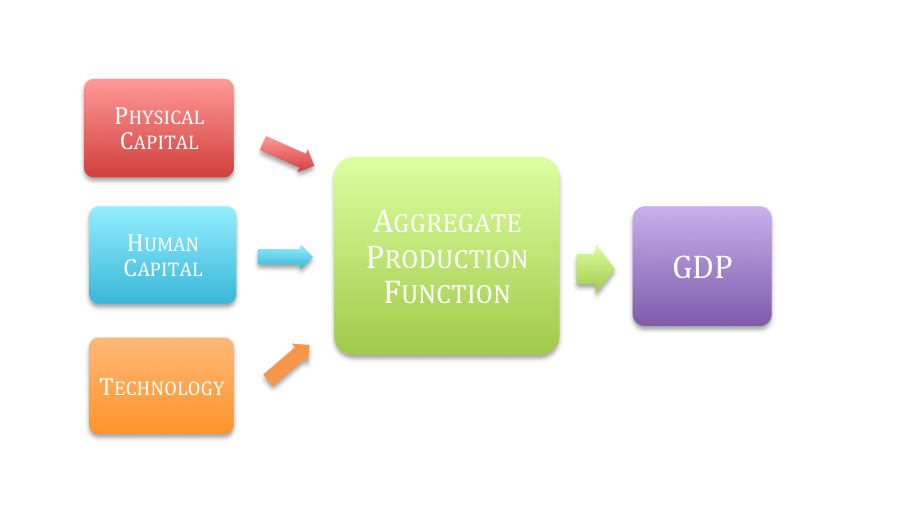 Figure 1. Aggregate Production Function. An aggregate production function shows what goes into producing the output for an overall economy. 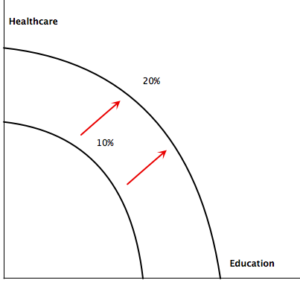 What causes economic growth then? It must be increases in physical or human capital, or technological improvements.

Economic Growth and the Standard of Living 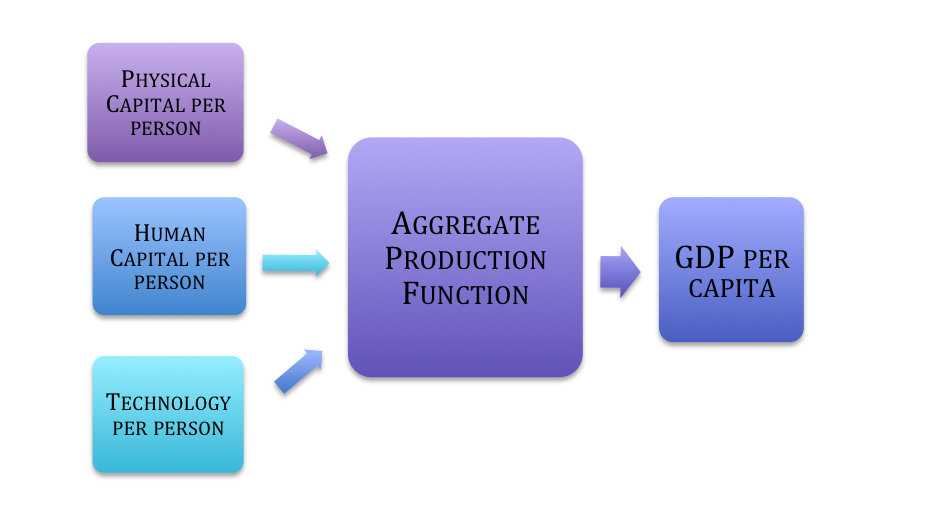 aggregate per capita production function:
aggregate production function expressed in per capita terms: inputs including physical capital per person, human capital per person, and technology per person are transformed into output measured as GDP per capita
aggregate production function:
the process whereby an economy as a whole turns economic inputs such as human capital, physical capital, and technology into output measured as GDP
human capital:
the accumulated skills and education of workers
innovation:
putting advances in knowledge to use in a new product or service
invention:
advances in knowledge
labor productivity:
quantity of output produced per worker, or per hour worked (sometimes called worker productivity)
production function:
the process whereby a firm turns economic inputs like labor, machinery, and raw materials into outputs like goods and services used by consumers
technological change:
a combination of invention—advances in knowledge—and innovation