A common measure of U.S. productivity per worker is the dollar value per hour the worker contributes to the employer’s output. This measure excludes government workers, because their output is not sold in the market and so their productivity is hard to measure. It also excludes farming, which accounts for only a relatively small share of the U.S. economy. Figure 1 shows that the average amount produced by a U.S. worker in an hour averaged over $100 in 2011, more than twice the amount an average worker produced per hour in 1966. 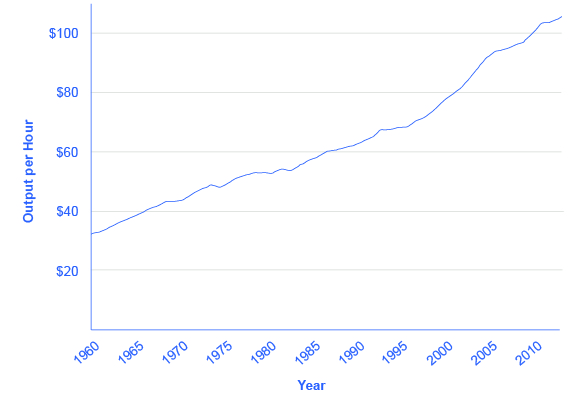 Figure 1. Output per Hour Worked in the U.S. Economy, 1947–2011. In the U.S. economy, worker productivity rose more quickly in the 1960s and the mid-1990s compared with the 1970s and 1980s. However, these growth-rate differences are only a few percentage points per year. Look carefully to see them in the changing slope of the line. The average U.S. worker produced nearly $105 per hour in 2012. (Source: U.S. Department of Labor, Bureau of Labor Statistics.)

According to the Department of Labor, U.S. productivity growth was fairly strong in the 1950s but then declined in the 1970s and 1980s before rising again in the second half of the 1990s and the first half of the 2000s. In fact, the rate of productivity measured by the change in output per hour worked averaged 3.2% per year from 1950 to 1970; dropped to 1.9% per year from 1970 to 1990; and then climbed back to over 2.3% from 1991 to the present, with another modest slowdown after 2001. Figure 2 shows average annual rates of productivity growth averaged over time since 1950. 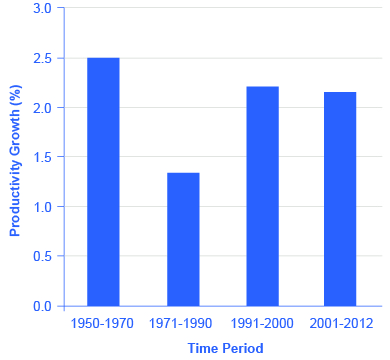 In recent years a controversy has been brewing among economists about the resurgence of U.S. productivity in the second half of the 1990s. One school of thought argues that the United States had developed a “new economy” based on the extraordinary advances in communications and information technology of the 1990s. The most optimistic proponents argue that it would generate higher average productivity growth for decades to come. The pessimists, on the other hand, argue that even five or ten years of stronger productivity growth does not prove that higher productivity will last for the long term. It is hard to infer anything about long-term productivity trends during the later part of the 2000s, because the steep recession of 2008–2009, with its sharp but not completely synchronized declines in output and employment, complicates any interpretation.

Recall that one way to measure human capital is to look at the average levels of education in an economy. Figure 3 illustrates the human capital deepening for U.S. workers by showing that the proportion of the U.S. population with a high school and a college degree is rising. As recently as 1970, for example, only about half of U.S. adults had at least a high school diploma; by the start of the twenty-first century, more than 80% of adults had graduated from high school. The idea of human capital deepening also applies to the years of experience that workers have, but the average experience level of U.S. workers has not changed much in recent decades. Thus, the key dimension for deepening human capital in the U.S. economy focuses more on additional education and training than on a higher average level of work experience. 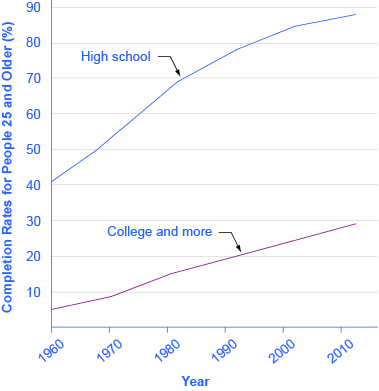 Figure 3. Human Capital Deepening in the U.S. Rising levels of education for persons 25 and older show the deepening of human capital in the U.S. economy. Even today, relatively few U.S. adults have completed a four-year college degree. There is clearly room for additional deepening of human capital to occur. (Source: US Department of Education, National Center for Education Statistics).

Physical capital deepening in the U.S. economy is shown in Figure 4. The average U.S. worker in the late 2000s was working with physical capital worth almost three times as much as that of the average worker of the early 1950s. 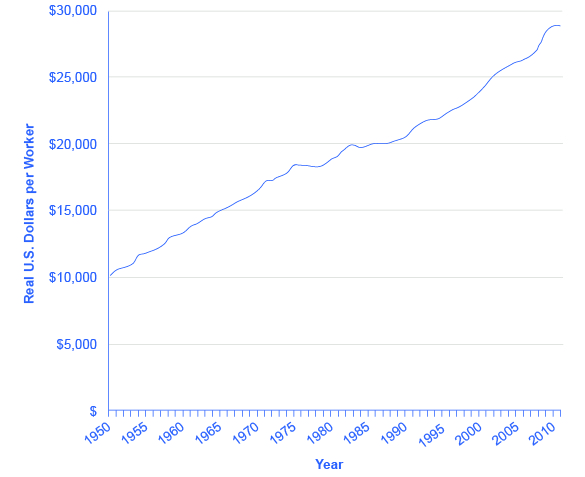 Figure 4. Physical Capital per Worker in the United States. The value of the physical capital, measured by plant and equipment, used by the average worker in the U.S. economy has risen over the decades. The increase may have leveled off a bit in the 1970s and 1980s, which were not, coincidentally, times of slower-than-usual growth in worker productivity. We see a renewed increase in physical capital per worker in the late 1990s, followed by a flattening in the early 2000s. (Source: Center for International Comparisons of Production, Income and Prices, University of Pennsylvania).

capital deepening:
an increase by society in the average level of physical and/or human capital per person