The Neoclassical Perspective and Potential GDP

The neoclassical perspective on macroeconomics is based on two building blocks (or assumptions):

The key policy implication is this: government should focus more on promoting long-term economic growth and on controlling inflation rather than worrying about recession or cyclical unemployment. This focus on long-run growth instead of short-run fluctuations in the business cycle means that neoclassical economics is more useful for long-run macroeconomic analysis and Keynesian economics is more useful for analyzing the macroeconomic short run. Let’s consider the two neoclassical building blocks in turn, and how they can be embodied in the aggregate demand-aggregate supply model.

The Importance of Potential GDP in the Long Run

Figure 1 shows potential and actual real GDP from 1960 to 2017 (the data for potential GDP is estimated by the nonpartisan Congressional Budget Office, while the data for real GDP is from the Bureau of Economic Analysis in the U.S. Department of Commerce). What should be clear is that while actual GDP is sometimes above and sometimes below potential, over the long term it tracks potential quite well. For example from 2008 to 2009, the U.S. economy tumbled into recession and remained below its potential. At other times, like in the late 1990s or late 2017, the economy ran at potential GDP—or even slightly ahead. Most economic recessions and upswings are times when the economy is 1–3% below or above potential GDP in a given year. Clearly, short-run fluctuations around potential GDP do exist, but over the long run, the upward trend of potential GDP determines the size of the economy.

The unemployment rate has fluctuated from as low as 3.5% in 1969 to as high as 9.7% in 1982 and 9.6% in 2009. Even as the U.S. unemployment rate rose during recessions and declined during expansions, it kept returning to the general neighborhood of 5.0–5.5%. When the Congressional Budget Office carried out its long-range economic forecasts in 2010, it assumed that from 2015 to 2020, after the recession has passed, the unemployment rate would be 5.0%. From a long-run perspective, the economy seems to keep adjusting back to this rate of unemployment, which we described above as the natural rate.

Growth in GDP can be explained by investment in physical capital and human capital per person, as well as advances in technology. Physical capital per person refers to the amount and kind of machinery and equipment available to help people get work done. Compare, for example, your productivity in typing a term paper on a typewriter to working on your laptop with word processing software. Clearly, you will be able to be more productive using word processing software. The technology and level of capital of your laptop and software has increased your productivity. More broadly, the development of GPS technology and Universal Product Codes (those barcodes on every product we buy) has made it much easier for firms to track shipments, tabulate inventories, and sell and distribute products. These two technological innovations, and many others, have increased a nation’s ability to produce goods and services for a given population. Likewise, increasing human capital involves increasing levels of knowledge, education, and skill sets per person through vocational or higher education. Physical and human capital improvements with technological advances will increase overall productivity and, thus, GDP.

To see how these improvements have increased productivity and output at the national level, we should examine evidence from the United States. The United States experienced significant growth in the twentieth century due to phenomenal changes in infrastructure, equipment, and technological improvements in physical capital and human capital. The population more than tripled in the twentieth century, from 76 million in 1900 to over 300 million in 2012. The human capital of modern workers is far higher today because the education and skills of workers have risen dramatically. In 1900, only about one-eighth of the U.S. population had completed high school and just one person in 40 had completed a four-year college degree. By 2010, more than 87% of Americans had a high school degree and over 29% had a four-year college degree as well. The average amount of physical capital per worker has grown dramatically. The technology available to modern workers is extraordinarily better than a century ago: cars, airplanes, electrical machinery, smartphones, computers, chemical and biological advances, materials science, health care—the list of technological advances could run on and on. More workers, higher skill levels, larger amounts of physical capital per worker, and amazingly better technology, and potential GDP for the U.S. economy has clearly increased a great deal since 1900.

Over time, increases in the quantity and quality of physical capital, increases in human capital, and technological advancements shift potential GDP and the vertical LRAS curve gradually to the right. This gradual increase in an economy’s potential GDP is often described as a nation’s long-term economic growth. 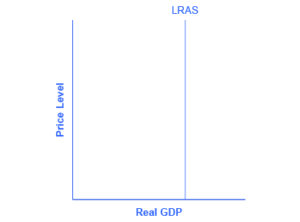 human capital:
education, training and skills possessed by workers that make them more productive
natural rate of unemployment:
Rate that unemployment returns to in the long run, where there is no cyclical unemployment
neoclassical perspective:
belief that the level of economic activity is determined primarily by aggregate supply
physical capital per person:
the amount and kind of machinery and equipment available to help a person produce a good or service
potential GDP:
level of output that can be achieved when all resources (land, labor, capital, and entrepreneurial ability) are fully employed