When oligopolist firms consider what quantity to produce and what price to charge, they face a temptation to work with the other firms to act as if they were a single monopoly. By acting together, oligopolistic firms can hold down industry output, charge a higher price, and divide the profit among themselves. When firms act together in this way to reduce output and keep prices high, it is called collusion. A group of firms that have a formal agreement to collude to produce the monopoly output and sell at the monopoly price is called a cartel.

We can see what collusion looks like in Figure 1. If the firms decide to collude, they choose to produce the monopoly output, Qc, and charge a corresponding price, Pc, which can be read off the market demand curve. Since they produce together where MR = MC, they will maximize industry profits, just like an actual monopoly would. 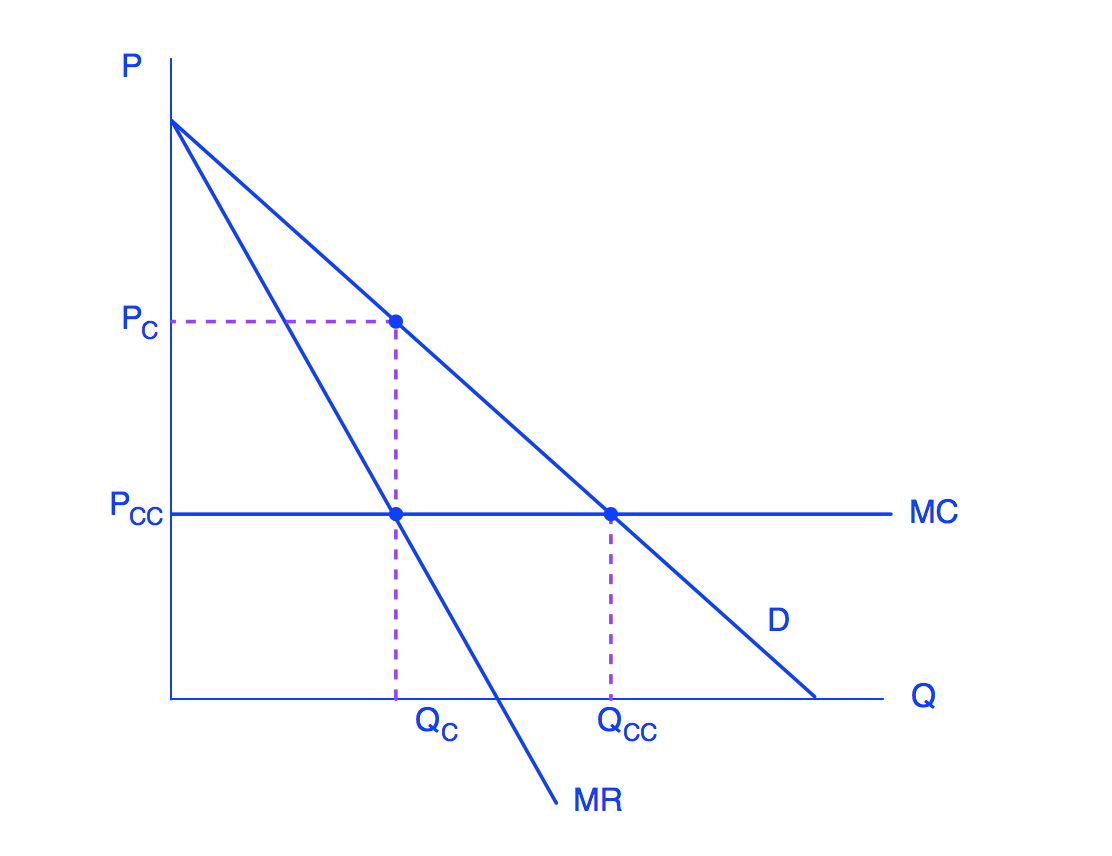 Figure 1. Profit Maximization for an Oligopoly. The profit maximizing point for colluding oligopolies is found where MR=MC, where price is Pc, just as in a monopoly. Because of cutthroat competition, oligopolies may instead act as perfect competitors, moving the profit maximizing point to where demand and MC intersect, just as in perfect competition. This is found at the intersection of Qcc and Pcc.

Economists have understood for a long time the desire of businesses to avoid competing so that they can instead raise the prices that they charge and earn higher profits. Adam Smith wrote in Wealth of Nations in 1776: “People of the same trade seldom meet together, even for merriment and diversion, but the conversation ends in a conspiracy against the public, or in some contrivance to raise prices.”

Even when oligopolists recognize that they would benefit as a group by acting like a monopoly, each individual oligopoly faces a private temptation to produce just a slightly higher quantity and earn slightly higher profit—while still counting on the other oligopolists to hold down their production and keep prices high. If at least some oligopolists give in to this temptation and start producing more, then the market price will fall. A small handful of oligopoly firms may end up competing so fiercely that they all find themselves earning zero economic profits—as if they were perfect competitors. This situation is called cut-throat competition, and is shown in Figure 1 at Qcc and Pcc. Since Pcc equals average cost, firms end up just breaking even.

Watch this video for an explanation of collusion and to learn more about why cartels often fall apart.

Oligopoly is probably the second most common market structure (monopolistic competition being the first). When oligopolies result from patented innovations or from taking advantage of economies of scale to produce at low average cost, they may provide considerable benefit to consumers. Oligopolies are often protected by significant barriers to entry, which enable the oligopolists to earn sustained profits over long periods of time. They typically operate at a level of output where price is greater than marginal cost, so oligopolistic industries are not allocatively efficient. Unlike in the simple example in Figure 1, oligopolists also do not typically produce at the minimum of their average cost curves, so they are not productively efficient. When they lack vibrant competition, they may lack incentives to provide innovative products and high-quality service.

The task of public policy with regard to competition is to sort through these multiple realities, attempting to encourage behavior that is beneficial to the broader society and to discourage behavior that only adds to the profits of a few large companies, with no corresponding benefit to consumers.

cartel:
a group of firms that collude to produce the monopoly output and sell at the monopoly price
collusion:
when firms act together to reduce output and keep prices high
cut-throat competition:
oligopolistic outcome when firms decide to cut prices to capture market share; in the limit, this leads to zero economic profits