Deadweight Loss in a Monopoly

Think about what’s wrong with a monopoly. Lay people typically say monopolies charge too high a price, but economists argue that monopolies supply too little output to be allocatively efficient. In an earlier module on the applications of supply and demand, we introduced the concepts of consumer surplus, producer surplus and social (or economic) surplus. We defined allocative efficiency as the quantity of any product that maximizes social surplus. This definition allows us to see what’s inefficient about monopoly. 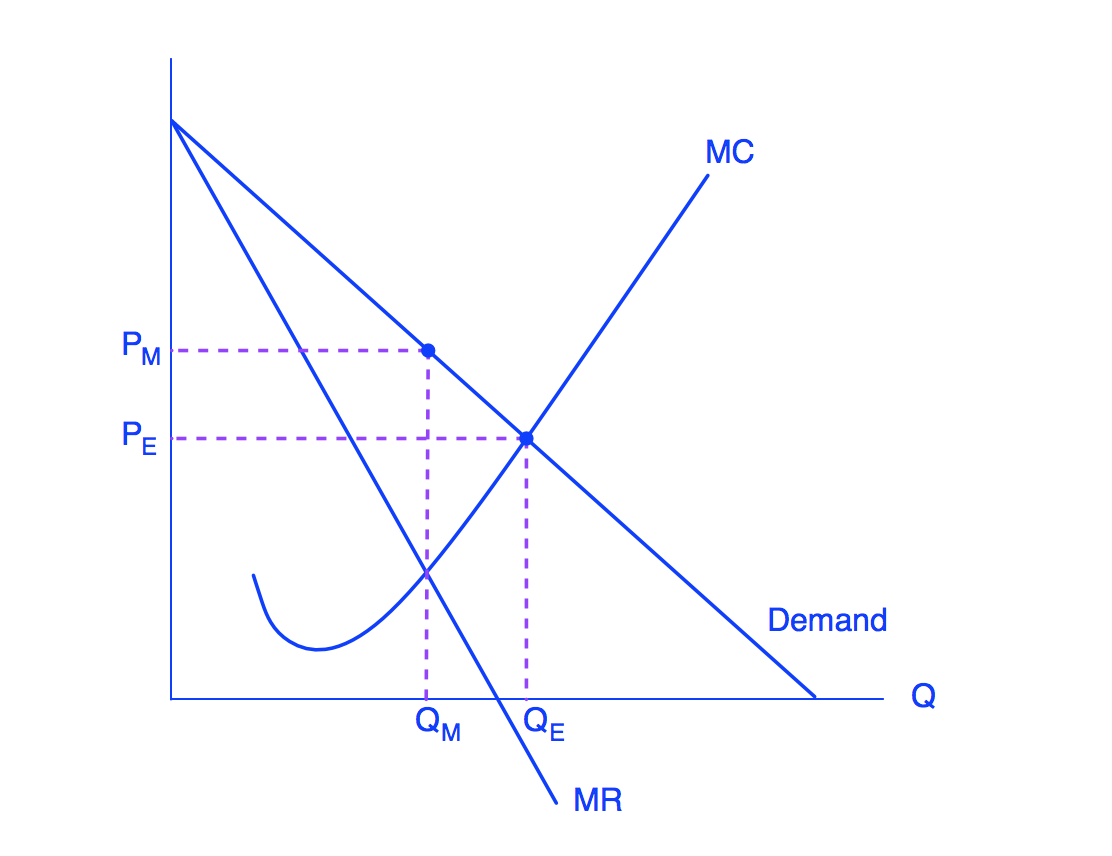 Figure 1. If a firm must charge the same price to all customers, the price and quantity that will maximize profits is PM and QM, where MR = MC). At that quantity, since demand is greater than MC, there remain customers willing to pay more than the marginal cost of additional additional output. Thus if the firm charged addition customers, say PE, the quantity sold would increase to QE, consumers would gain consumer surplus, and the firm would gain profit. The additional social surplus would be the area of the triangle below the demand curve but above the MC curve over the quantity QM to QE.

Take a look at Figure 1. The monopoly supplies QM and charges PM. It chooses this price and quantity to maximize profits. But consider this. Is there a consumer who is willing to pay more than the marginal cost to obtain one more unit of output? The answer is yes. You can see this in Figure 1, starting at QM; now consider one more unit of output (i.e. QM+1). For this unit of output, the demand curve is above the marginal cost curve. That means that some consumer is willing to pay more than it would cost to produce that additional unit of output. Suppose the firm offers to sell that additional unit for PE. The consumer would get the product and earn D-PE in consumer surplus. The firm would earn PE – MC in producer surplus (or profit). And the total social surplus would increase by the additional consumer surplus plus the additional producer surplus or D – MC.

But we don’t need to stop here. What about one more unit of output? Since D is still greater than MC, there’s a customer who would be willing to pay more than it would cost the firm to produce one more unit of output, so both parties could benefit from producing and selling one more. Where does this end? It ends where the social surplus is maximized and where D = MC. That it, it ends at QE.  If you think carefully, you’ll understand that QE & PE are the quantity and price that would occur under perfect competition. In other words, since QE maximizes social surplus, it is the most allocatively efficient quantity.

If the monopoly produces QM and charges PM, the outcome isn’t efficient. The lost social surplus due to monopoly is called a “deadweight loss,” since it is lost to society. No one captures any of that lost value.

It’s likely that at this point you are experiencing some cognitive dissonance. We know that a firm will maximize profits by producing the quantity of output, QM, where MR = MC. But we just learned that the firm can earn even more profit by producing at QE. How can both of these statements be true?  The answer is price discrimination. Price discrimination means charging different prices to different customers for the same product. If a firm has to charge the same price to all customers, PM and QM will maximize profits. But if it can price discriminate, it can make even more profits.

Think about when a store runs a sale. First, they charge the normal price PM and sell the normal quantity QM. Then, they run a sale and charge PE and sell QE – QM. Sales are an exercise in price discrimination.

Three things are necessary for effective price discrimination. First, the firm needs to have at least some market power. If it has no market power, then it can’t charge different prices for different customers. Second, the firm needs to be able to sort the customers into those willing to pay a higher price and those who are no, but who would be willing to pay a lower price. Identifying these groups of customers is difficult, since customers don’t usually wear signs to that effect. Often firms create a situation where customers reveal themselves. Why do movie theaters charge lower prices for matinees (i.e showings before evening?) The answer is because usually it’s young people and retired people who go to matinees because they don’t have the money to pay full price. Why don’t other adults go to matinees? The answer is because they tend to work during the day (or have other things to do during weekend days). The last thing necessary for price discrimination is the inability for customers to resell the product. If a grocery store charged a higher price for female shoppers and a lower price for male shoppers, smart females would simply ask their male associates to shop for them. Since the groceries can easily be transferred to (and paid for) by the females, price discrimination wouldn’t work. The same strategy would not be effective with movie tickets, since the viewers couldn’t “resell” the movie experience to another person. Generally, services are harder to resell than goods, so you would expect to see more price discrimination with services.

Watch this video to see an examples of how price discrimination is used by firms to maximize profits and efficiency.