Most people criticize monopolies because they charge too high a price, but what economists object to is that monopolies do not supply enough output to be allocatively efficient. To understand why a monopoly is inefficient, it is helpful to compare it with the benchmark model of perfect competition.

Allocative efficiency is an economic concept regarding efficiency at the social or societal level. It refers to producing the optimal quantity of some output, the quantity where the marginal benefit to society of one more unit just equals the marginal cost. The rule of profit maximization in a world of perfect competition was for each firm to produce the quantity of output where P = MC. The price (P) reflects demand, and as such is a measure of how much buyers value the good, while the marginal cost (MC) is a measure of what additional units of output cost society to produce. Following this rule assures allocative efficiency. If P > MC, then the marginal benefit to society (as measured by P) is greater than the marginal cost to society of producing additional units, and a greater quantity should be produced. However, in the case of monopoly, at the profit-maximizing level of output, price is always greater than marginal cost. You can see this in Figure 1. 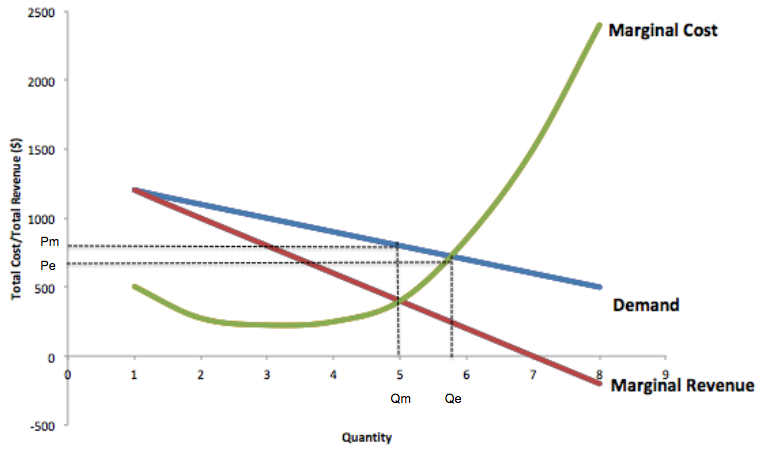 Figure 1. The Allocative Inefficiency of Monopoly.  Allocative Efficiency requires production at Qe where P = MC.  A monopoly will produce less output and sell at a higher price to maximize profit at Qm and Pm. Thus, monopolies don’t produce enough output to be allocatively efficient.

Thus, consumers will suffer from a monopoly because it will sell a lower quantity in the market, at a higher price, than would have been the case in a perfectly competitive market.

Watch this video to review the key concepts about monopoly, but also to learn about how monopolies are inefficient. The allocatively efficient quantity of output, or the socially optimal quantity, is where the demand equals marginal cost, but the monopoly will not produce at this point. Instead, a monopoly produces too little output at too high a cost, resulting in deadweight loss.

The problem of inefficiency for monopolies often runs even deeper than these issues, and also involves incentives for efficiency over longer periods of time. There are counterbalancing incentives here. On one side, firms may strive for new inventions and new intellectual property because they want to become monopolies and earn high profits—at least for a few years until the competition catches up. In this way, monopolies may come to exist because of competitive pressures on firms. However, once a barrier to entry is in place, a monopoly that does not need to fear competition can just produce the same old products in the same old way—while still ringing up a healthy rate of profit. John Hicks, who won the Nobel Prize for economics in 1972, wrote in 1935: “The best of all monopoly profits is a quiet life.” He did not mean the comment in a complimentary way. He meant that monopolies may bank their profits and slack off on trying to please their customers.

When AT&T provided all of the local and long-distance phone service in the United States, along with manufacturing most of the phone equipment, the payment plans and types of phones did not change much. The old joke was that you could have any color phone you wanted, as long as it was black. However, in 1982, government litigation split up AT&T into a number of local phone companies, a long-distance phone company, and a phone equipment manufacturer. An explosion of innovation followed. Services like call waiting, caller ID, three-way calling, voice mail through the phone company, mobile phones, and wireless connections to the internet all became available. Companies offered a wide range of payment plans, as well. It was no longer true that all phones were black. Instead, phones came in a wide variety of shapes and colors. The end of the telephone monopoly brought lower prices, a greater quantity of services, and also a wave of innovation aimed at attracting and pleasing customers.

allocative efficiency:
producing the optimal quantity of some output; the quantity where the marginal benefit to society of one more unit just equals the marginal cost