Until recently, all photosynthetic eukaryotes were considered members of the kingdom Plantae. The brown, red, and gold algae, however, have been reassigned to the Protista kingdom. This is because apart from their ability to capture light energy and fix CO2, they lack many structural and biochemical traits that distinguish plants from protists. The position of green algae is more ambiguous. Green algae contain the same carotenoids and chlorophyll a and b as land plants, whereas other algae have different accessory pigments and types of chlorophyll molecules in addition to chlorophyll a. Both green algae and land plants also store carbohydrates as starch. Cells in green algae divide along cell plates called phragmoplasts, and their cell walls are layered in the same manner as the cell walls of embryophytes. Consequently, land plants and closely related green algae are now part of a new monophyletic group called Streptophyta.

The remaining green algae, which belong to a group called Chlorophyta, include more than 7000 different species that live in fresh or brackish water, in seawater, or in snow patches. A few green algae even survive on soil, provided it is covered by a thin film of moisture in which they can live. Periodic dry spells provide a selective advantage to algae that can survive water stress. Some green algae may already be familiar, in particular Spirogyra and desmids. Their cells contain chloroplasts that display a dizzying variety of shapes, and their cell walls contain cellulose, as do land plants. Some green algae are single cells, such as Chlorella and Chlamydomonas, which adds to the ambiguity of green algae classification, because plants are multicellular. Other algae, like Ulva (commonly called sea lettuce), form colonies (Figure 1). 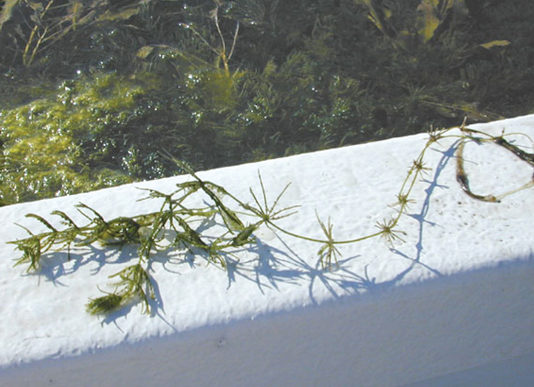 Green algae in the order Charales, and the coleochaetes (microscopic green algae that enclose their spores in sporopollenin), are considered the closest living relatives of embryophytes. The Charales can be traced back 420 million years. They live in a range of fresh water habitats and vary in size from a few millimeters to a meter in length. The representative species is Chara (Figure 2), often called muskgrass or skunkweed because of its unpleasant smell. Large cells form the thallus: the main stem of the alga. Branches arising from the nodes are made of smaller cells. Male and female reproductive structures are found on the nodes, and the sperm have flagella. Unlike land plants, Charales do not undergo alternation of generations in their lifecycle. Charales exhibit a number of traits that are significant in their adaptation to land life. They produce the compounds lignin and sporopollenin, and form plasmodesmata that connect the cytoplasm of adjacent cells. The egg, and later, the zygote, form in a protected chamber on the parent plant.

New information from recent, extensive DNA sequence analysis of green algae indicates that the Zygnematales are more closely related to the embryophytes than the Charales. The Zygnematales include the familiar genus Spirogyra. As techniques in DNA analysis improve and new information on comparative genomics arises, the phylogenetic connections between species will change. Clearly, plant biologists have not yet solved the mystery of the origin of land plants.

Green algae share more traits with land plants than other algae, according to structure and DNA analysis. Charales form sporopollenin and precursors of lignin, phragmoplasts, and have flagellated sperm. They do not exhibit alternation of generations.