Phylum Mollusca is the predominant phylum in marine environments. It is estimated that 23 percent of all known marine species are mollusks; there are over 75,000 described species, making them the second most diverse phylum of animals. The name “mollusca” signifies a soft body, since the earliest descriptions of mollusks came from observations of unshelled cuttlefish. Mollusks are predominantly a marine group of animals; however, they are known to inhabit freshwater as well as terrestrial habitats. Mollusks display a wide range of morphologies in each class and subclass, but share a few key characteristics, including a muscular foot, a visceral mass containing internal organs, and a mantle that may or may not secrete a shell of calcium carbonate (Figure 1). 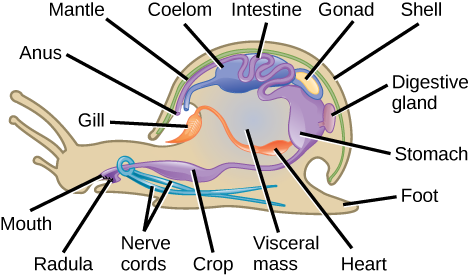 Figure 1. There are many species and variations of mollusks; this illustration shows the anatomy of an aquatic gastropod.

Which of the following statements about the anatomy of a mollusk is false?

Mollusks have a muscular foot, which is used for locomotion and anchorage, and varies in shape and function, depending on the type of mollusk under study. In shelled mollusks, this foot is usually the same size as the opening of the shell. The foot is a retractable as well as an extendable organ. The foot is the ventral-most organ, whereas the mantle is the limiting dorsal organ. Mollusks are eucoelomate, but the coelomic cavity is restricted to a cavity around the heart in adult animals. The mantle cavity develops independently of the coelomic cavity.

The visceral mass is present above the foot, in the visceral hump. This includes digestive, nervous, excretory, reproductive, and respiratory systems. Mollusk species that are exclusively aquatic have gills for respiration, whereas some terrestrial species have lungs for respiration. Additionally, a tongue-like organ called a radula, which bears chitinous tooth-like ornamentation, is present in many species, and serves to shred or scrape food. The mantle (also known as the pallium) is the dorsal epidermis in mollusks; shelled mollusks are specialized to secrete a chitinous and hard calcareous shell.

Most mollusks are dioecious animals and fertilization occurs externally, although this is not the case in terrestrial mollusks, such as snails and slugs, or in cephalopods. In some mollusks, the zygote hatches and undergoes two larval stages—trochophore and veliger—before becoming a young adult; bivalves may exhibit a third larval stage, glochidia.

Phylum Mollusca is a very diverse (85,000 species) group of mostly marine species. Mollusks have a dramatic variety of form, ranging from large predatory squids and octopus, some of which show a high degree of intelligence, to grazing forms with elaborately sculpted and colored shells. This phylum can be segregated into seven classes: Aplacophora, Monoplacophora, Polyplacophora, Bivalvia, Gastropoda, Cephalopoda, and Scaphopoda. 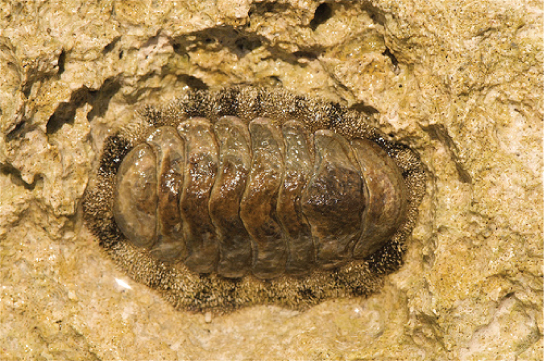 Figure 2. This chiton from the class Polyplacaphora has the eight-plated shell that is indicative of its class. (credit: Jerry Kirkhart)

Class Aplacophora (“bearing no plates”) includes worm-like animals primarily found in benthic marine habitats. These animals lack a calcareous shell but possess aragonite spicules on their epidermis. They have a rudimentary mantle cavity and lack eyes, tentacles, and nephridia (excretory organs). Members of class Monoplacophora (“bearing one plate”) posses a single, cap-like shell that encloses the body. The morphology of the shell and the underlying animal can vary from circular to ovate. A looped digestive system, multiple pairs of excretory organs, many gills, and a pair of gonads are present in these animals. The monoplacophorans were believed extinct and only known via fossil records until the discovery of Neopilina galathaea in 1952. Today, scientists have identified nearly two dozen extant species.

Animals in the class Polyplacophora (“bearing many plates”) are commonly known as “chitons” and bear an armor-like eight-plated shell (Figure 2). These animals have a broad, ventral foot that is adapted for suction to rocks and other substrates, and a mantle that extends beyond the shell in the form of a girdle. Calcareous spines may be present on the girdle to offer protection from predators. Respiration is facilitated by ctenidia (gills) that are present ventrally. These animals possess a radula that is modified for scraping. The nervous system is rudimentary with only buccal or “cheek” ganglia present at the anterior end. Eyespots are absent in these animals. A single pair of nephridia for excretion is present. 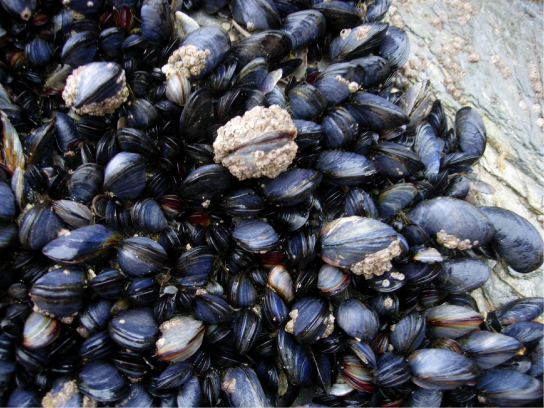 Figure 3. These mussels, found in the intertidal zone in Cornwall, England, are bivalves. (credit: Mark A. Wilson)

Class Bivalvia (“two shells”) includes clams, oysters, mussels, scallops, and geoducks. Members of this class are found in marine as well as freshwater habitats. As the name suggests, bivalves are enclosed in a pair of shells (valves are commonly called “shells”) that are hinged at the dorsal end by shell ligaments as well as shell teeth (Figure 3). The overall morphology is laterally flattened, and the head region is poorly developed. Eyespots and statocysts may be absent in some species. These animals are suspension feeders—they eat material, such as plankton, that is suspended in the water around them. Due to their diet, this class of mollusks lacks a radula. Respiration is facilitated by a pair of ctenidia, whereas excretion and osmoregulation are brought about by a pair of nephridia. Bivalves often possess a large mantle cavity. In some species, the posterior edges of the mantle may fuse to form two siphons that serve to take in and exude water.

One of the functions of the mantle is to secrete the shell. Some bivalves like oysters and mussels possess the unique ability to secrete and deposit a calcareous nacre or “mother of pearl” around foreign particles that may enter the mantle cavity. This property has been commercially exploited to produce pearls.

Watch this animation of mussels feeding.

Animals in class Gastropoda (“stomach foot”) include well-known mollusks like snails, slugs, conchs, sea hares, and sea butterflies. Gastropoda includes shell-bearing species as well as species with a reduced shell. These animals are asymmetrical and usually present a coiled shell (Figure 4). Shells may be planospiral (like a garden hose wound up), commonly seen in garden snails, or conispiral, (like a spiral staircase), commonly seen in marine conches.

The visceral mass in the shelled species displays torsion around the perpendicular axis on the center of the foot, which is the key characteristic of this group, along with a foot that is modified for crawling (Figure 5). Most gastropods bear a head with tentacles, eyes, and a style. A complex radula is used by the digestive system and aids in the ingestion of food. Eyes may be absent in some gastropods species. The mantle cavity encloses the ctenidia as well as a pair of nephridia. 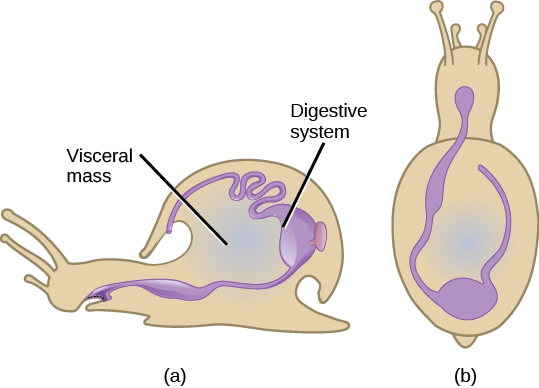 Figure 5. During embryonic development of gastropods, the visceral mass undergoes torsion, or counterclockwise rotation of anatomical features. As a result, the anus of the adult animal is located over the head. Torsion is an independent process from coiling of the shell.

Can Snail Venom Be Used as a Pharmacological Painkiller? 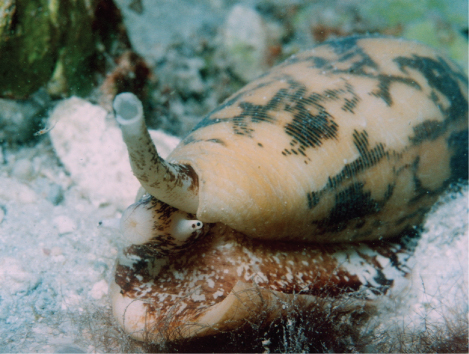 Figure 6. Members of the genus Conus produce neurotoxins that may one day have medical uses. (credit: David Burdick, NOAA)

Marine snails of the genus Conus (Figure 6) attack prey with a venomous sting. The toxin released, known as conotoxin, is a peptide with internal disulfide linkages. Conotoxins can bring about paralysis in humans, indicating that this toxin attacks neurological targets. Some conotoxins have been shown to block neuronal ion channels. These findings have led researchers to study conotoxins for possible medical applications.

Conotoxins are an exciting area of potential pharmacological development, since these peptides may be possibly modified and used in specific medical conditions to inhibit the activity of specific neurons. For example, these toxins may be used to induce paralysis in muscles in specific health applications, similar to the use of botulinum toxin. Since the entire spectrum of conotoxins, as well as their mechanisms of action, are not completely known, the study of their potential applications is still in its infancy. Most research to date has focused on their use to treat neurological diseases. They have also shown some efficacy in relieving chronic pain, and the pain associated with conditions like sciatica and shingles. The study and use of biotoxins—toxins derived from living organisms—are an excellent example of the application of biological science to modern medicine.

Class Cephalopoda (“head foot” animals), include octopi, squids, cuttlefish, and nautilus. Cephalopods are a class of shell-bearing animals as well as mollusks with a reduced shell. They display vivid coloration, typically seen in squids and octopi, which is used for camouflage. All animals in this class are carnivorous predators and have beak-like jaws at the anterior end. All cephalopods show the presence of a very well-developed nervous system along with eyes, as well as a closed circulatory system. The foot is lobed and developed into tentacles, and a funnel, which is used as their mode of locomotion. Suckers are present on the tentacles in octopi and squid. Ctenidia are enclosed in a large mantle cavity and are serviced by large blood vessels, each with its own heart associated with it; the mantle has siphonophores that facilitate exchange of water.

Locomotion in cephalopods is facilitated by ejecting a stream of water for propulsion. This is called “jet” propulsion. A pair of nephridia is present within the mantle cavity. Sexual dimorphism is seen in this class of animals. Members of a species mate, and the female then lays the eggs in a secluded and protected niche. Females of some species care for the eggs for an extended period of time and may end up dying during that time period. Cephalopods such as squids and octopi also produce sepia or a dark ink, which is squirted upon a predator to assist in a quick getaway.

Reproduction in cephalopods is different from other mollusks in that the egg hatches to produce a juvenile adult without undergoing the trochophore and veliger larval stages.

In the shell-bearing Nautilus spp., the spiral shell is multi-chambered. These chambers are filled with gas or water to regulate buoyancy. The shell structure in squids and cuttlefish is reduced and is present internally in the form of a squid pen and cuttlefish bone, respectively. Examples are shown in Figure 7. 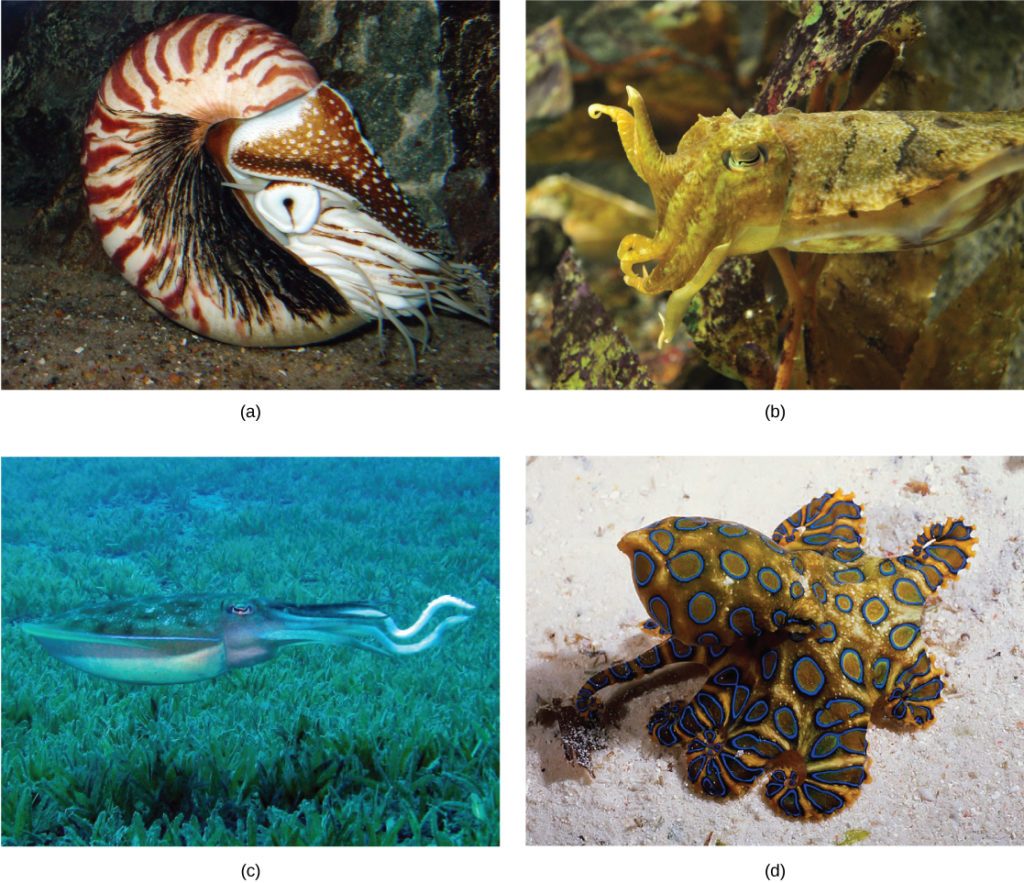 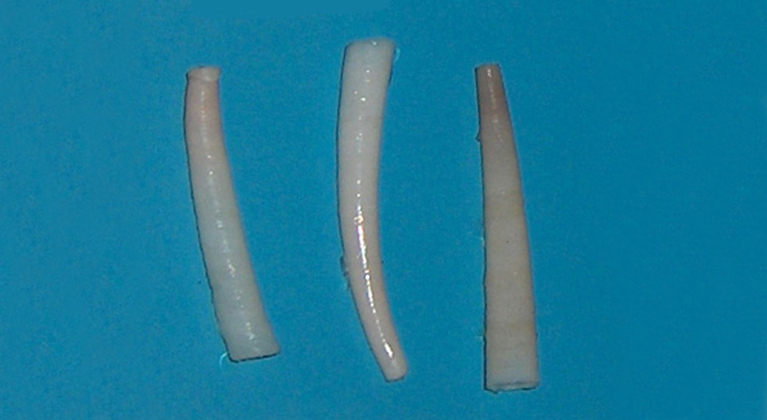 Members of class Scaphopoda (“boat feet”) are known colloquially as “tusk shells” or “tooth shells,” as evident when examining Dentalium, one of the few remaining scaphopod genera (Figure 8).

Scaphopods are usually buried in sand with the anterior opening exposed to water. These animals bear a single conical shell, which has both ends open. The head is rudimentary and protrudes out of the posterior end of the shell. These animals do not possess eyes, but they have a radula, as well as a foot modified into tentacles with a bulbous end, known as captaculae. Captaculae serve to catch and manipulate prey. Ctenidia are absent in these animals.

Phylum Mollusca is a large, marine group of invertebrates. Mollusks show a variety of morphological variations within the phylum. This phylum is also distinct in that some members exhibit a calcareous shell as an external means of protection. Some mollusks have evolved a reduced shell. Mollusks are protostomes. The dorsal epidermis in mollusks is modified to form the mantle, which encloses the mantle cavity and visceral organs. This cavity is quite distinct from the coelomic cavity, which in the adult animal surrounds the heart. Respiration is facilitated by gills known as ctenidia. A chitinous-toothed tongue called the radula is present in most mollusks. Early development in some species occurs via two larval stages: trochophore and veliger. Sexual dimorphism is the predominant sexual strategy in this phylum. Mollusks can be divided into seven classes, each with distinct morphological characteristics