The Nemertea are colloquially known as ribbon worms. Most species of phylum Nemertea are marine, predominantly benthic or bottom dwellers, with an estimated 900 species known. However, nemertini have been recorded in freshwater and terrestrial habitats as well. Most nemerteans are carnivores, feeding on worms, clams, and crustaceans. Some species are scavengers, and some nemertini species, like Malacobdella grossa, have also evolved commensalistic relationships with some mollusks. Some species have devastated commercial fishing of clams and crabs. Nemerteans have almost no predators and two species are sold as fish bait. 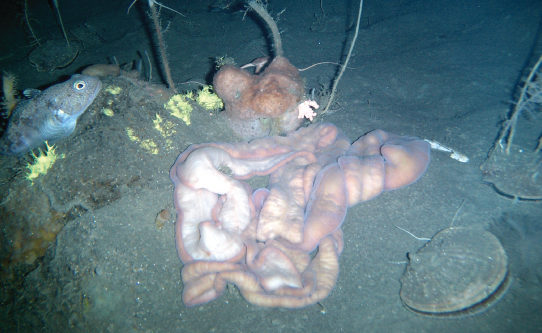 Figure 1. The proboscis worm (Parborlasia corrugatus) is a scavenger that combs the sea floor for food. The species is a member of the phylum Nemertea. The specimen shown here was photographed in the Ross Sea, Antarctica. (credit: Henry Kaiser, National Science Foundation)

Ribbon worms vary in size from 1 cm to several meters. They show bilateral symmetry and remarkable contractile properties. Because of their contractility, they can change their morphological presentation in response to environmental cues. Animals in phylum Nemertea show a flattened morphology, that is, they are flat from front to back, like a flattened tube. Nemertea are soft and unsegmented animals (Figure 1).

A unique characteristic of this phylum is the presence of a proboscis enclosed in a rhynchocoel. The proboscis serves to capture food and may be ornamented with barbs in some species. The rhynchocoel is a fluid-filled cavity that extends from the head to nearly two-thirds of the length of the gut in these animals (Figure 2). The proboscis may be extended or retracted by the retractor muscle attached to the wall of the rhynchocoel.

Figure 2. The anatomy of a Nemertean is shown.

Watch the video below to see a nemertean attack a polychaete with its proboscis.

The nemertini show a very well-developed digestive system. A mouth opening that is ventral to the rhynchocoel leads into the foregut, followed by the intestine. The intestine is present in the form of diverticular pouches and ends in a rectum that opens via an anus. Gonads are interspersed with the intestinal diverticular pouches and open outwards via genital pores. A circulatory system consists of a closed loop of a pair of lateral blood vessels. The circulatory system is derived from the coelomic cavity of the embryo. Some animals may also have cross-connecting vessels in addition to lateral ones. Although these are called blood vessels, since they are of coelomic origin, the circulatory fluid is colorless. Some species bear hemoglobin as well as other yellow or green pigments. The blood vessels are connected to the rhynchocoel. The flow of fluid in these vessels is facilitated by the contraction of muscles in the body wall. A pair of protonephridia, or primitive kidneys, is present in these animals to facilitate osmoregulation. Gaseous exchange occurs through the skin in the nemertini.

Nemertini have a ganglion or “brain” situated at the anterior end between the mouth and the foregut, surrounding the digestive system as well as the rhynchocoel. A ring of four nerve masses called “ganglia” composes the brain in these animals. Paired longitudinal nerve cords emerge from the brain ganglia and extend to the posterior end. Ocelli or eyespots are present in pairs, in multiples of two in the anterior portion of the body. It is speculated that the eyespots originate from neural tissue and not from the epidermis.

Animals in phylum Nemertea show sexual dimorphism, although freshwater species may be hermaphroditic. Eggs and sperm are released into the water, and fertilization occurs externally. The zygote then develops into a planuliform larva. In some nemertine species, a pilidium larva may develop inside the young worm, from a series of imaginal discs. This larval form, characteristically shaped like a deerstalker cap, devours tissues from the young worm for survival before metamorphosing into the adult-like morphology.

The nemertini are the simplest eucoelomates. These ribbon-shaped animals bear a specialized proboscis enclosed within a rhynchocoel. The development of a closed circulatory system derived from the coelom is a significant difference seen in this species compared to other pseudocoelomate phyla. Alimentary, nervous, and excretory systems are more developed in the nemertini than in less advanced phyla. Embryonic development of nemertine worms proceeds via a planuliform larval stage.