Putting It Together: Polynomials 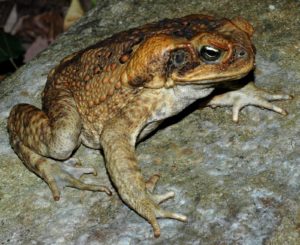 At the beginning of this module, we learned that 80 cane toads were introduced to Australia in 1935, and eventually became invasive based on the rate of growth of their population. We learned that when the total cane toad population in Australia reached 6,110, scientists considered them a significant threat to the ecosystem.

The toads reproduced at different rates in different environments, so to determine when the toads became invasive, the scientists needed to calculate two different rates of growth. In Northern Australia, the cane toads faced fewer challenges than in the south, so they replicated at the following rate:

The population of the toads increased based on the following formula:

[latex]n[/latex] = the number of years since they were introduced, and

We want to know how long it took the population of toads to reach 6,110 which represents an invasive population. This means we are solving for the variable [latex]n[/latex].

First, we will replace the variables [latex]P[/latex] and [latex]I[/latex] with the information we have.

We now have a problem similar to the ones we solved when finding the sides of a right triangle using the Pythagorean Theorem.  We will take the square root of both sides.

We find that it took just under 9 years for the population of toads to become invasive, or sometime around 1943.