The Purpose of Organization

Common Elements of an Organization

From a manager’s perspective, operations will be successful if a common purpose is made clear across the organization to create a coordinated effort of resources. Edgar Schein, a prominent organizational psychologist, identified four key elements of an organization’s structure: common purpose, coordinated effort, division of labor, and hierarchy of authority. Each of the four elements represents an essential component of an effective structure. Further, Schein proposes that these elements are instrumental in defining the organization’s culture.

Arguably, a manager’s most important responsibility is to coordinate the effort of work in a way that maximizes resources with the common purpose in mind. Managers will need to leverage the employees’ skill sets, experience, and personalities in a way that consistently adds value. Managers must also take into account employees’ preferences as they relate to job satisfaction and engagement.

Specialization and the Division of Labor

Early in the twentieth century, every employee on the Ford Motor Company assembly line had a specific, repetitive task. For instance, one person would install the wheels on the left side of the car, and another employee only installed the front bumper. By breaking the whole job down to specific standardized tasks and repeating them over and over, Ford could produce one car every ten seconds.

Ford, and many other factories, demonstrated that specialization made work more efficient. Management saw this as the most efficient use of the relative skills of its employees. Employee skills at performing a task improve through repetition. Less time is spent changing tasks, in putting away tools from a prior task and getting the necessary tools for the next task. A second, and equally important, efficiency with specialization is the ease and low cost of finding and training people to do specific and repetitive tasks.

Specialization continued to be used for maximum efficiency by McDonald’s, which invented the fast-food industry by specializing the work of every employee in the cooking, preparing and delivering of every meal. This model continues with newer companies such as Chipotle and Starbucks. 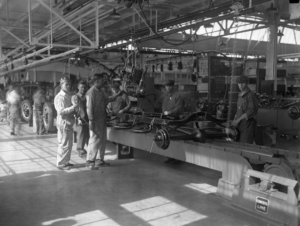 Workers are on the job on an assembly line at a Ford Motor Company plant in Long Beach, California, in 1930.

The division of labor describes the degree to which a task is divided into separate jobs or departments in order to improve efficiency. Larger firms, such as Fortune 100 companies, tend to have a high degree of division of labor; smaller entrepreneurial ventures tend to have more informal divisions of labor. For example, a large financial firm will have accountants in one department that only work on internal audits and another department where they focus on budgets and forecasting. An accountant in a small firm, however, needs to be more of a generalist and take on many different things (e.g., internal auditing, plus payroll, accounts receivable, financial planning, and taxes).

Specialization requires a trade-off between breadth and depth of knowledge. Although a high degree of specialization can increase productivity, it usually has undesirable side effects such as reduced employee job satisfaction because of the repetitiveness of certain tasks. Specialization limits the agility of a workforce, as employees cannot fill in for people in other areas of the business, and employees take longer to qualify for managerial positions. Fewer job improvements will occur because employees do not get the opportunity to work on other tasks.

Hierarchy determines the formal, position-based reporting lines and expresses who reports to whom. The U.S. Army has a tall hierarchy with about twenty ranks between a private and a general. On the other hand, Valve, an independent game developer, has a flat organization. Officially, it has no managers. With about 2.2 million employees, Walmart has a tall hierarchy, with twenty-nine senior managers all reporting to the top executive level, illustrated in the figure that follows. 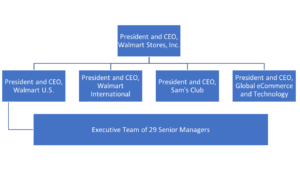 The top of Walmart’s organizational structure, which consists of ten additional layers.

An example of a flat organizational structure, which only has two levels of employees: the owner/CEO at the top and all other types of employees below.

In addition to Schein’s four key elements of an organizational structure, there are a few other characteristics to consider when determining the best structure for a business.

The term centralization refers to the degree to that decision making is concentrated to the top of the organization. To be clear, this refers to key decisions with potential impact on the business. If all proposals and decisions are made exclusively by the executive team, it is a highly centralized structure. However, if managers are allowed to make significant decisions affecting their areas of the business, it is a decentralized structure.

Formalization refers to the degree to which positions in an organization are standardized. If a job is highly formalized, then the employee has little to no discretion over what to do, when to do it, and how to do it. People sometimes confuse formalization with specialization, but they aren’t the same thing. Airline pilots have highly formalized jobs, dictated by FAA regulations that must be followed before, during and after every flight. Although the captain and co-pilot do have specialized tasks to perform, they are both involved in the entire delivery of service, and are able to function in each other’s roles if needed. Further, the training required for pilots is extensive, with regular flight simulator testing for enforcement of formalized responses for known situations and challenges that can be encountered in flight.

Certain jobs will have much less formalization of duties. Pharmaceutical representatives—the employees of pharmaceutical companies who call on medical offices to inform doctors of their drug’s effectiveness—have a great deal of freedom in their jobs. They each develop their own practices for gaining access to the doctors (starting with the medical office front desk staff) and generally only report on the number of physician conversations per week.