In 1855 and 1856, pro- and antislavery activists flooded Kansas with the intention of influencing the popular-sovereignty rule of the territories. Proslavery Missourians who crossed the border to vote in Kansas became known as border ruffians. These men gained the advantage by winning the territorial elections, most likely through voter fraud, intimidation, and illegal vote counting. (By some estimates, up to 60 percent of the votes cast in Kansas were fraudulent.) Once in power, the proslavery legislature, meeting at Lecompton, Kansas, drafted a constitution friendly to slaveholders known as the Lecompton Constitution. It was supported by President Buchanan, but opposed by Democratic Senator Stephen A. Douglas of Illinois.

The majority in Kansas, however, were Free-Soilers who seethed at the border ruffians’ co-opting of the democratic process. Many had come from New England to ensure a numerical advantage over the border ruffians. The New England Emigrant Aid Society, a northern antislavery group, helped fund these efforts to halt the expansion of slavery into Kansas and beyond. Kansas thus became a kind of symbol for the fate of slavery in the West. As the South Carolina congressman Preston Brooks claimed, “the admission of Kansas into the Union as a slave state is now a point of honor.” Yet for all the clamor and eventual violence, there were only about 200 slaves in Kansas at that time.

SEC. 2. The Legislature shall have no power to pass laws for the emancipation of slaves without the consent of the owners, or without paying the owners previous to their emancipation a full equivalent in money for the slaves so emancipated. They shall have no power to prevent immigrants to the State from bringing with them such persons as are deemed slaves by the laws of any one of the United States or Territories, so long as any person of the same age or description shall be continued in slavery by the laws of this State: Provided, That such person or slave be the bona fide property of such immigrants.

How are slaves defined in the 1857 Kansas constitution? How does this constitution safeguard the rights of slaveholders?

To learn more, go to the Kansas Historical Society’s Kansapedia to read the four different state constitutions that Kansas had during its early years as a United States Territory. What can you deduce about the authors of each constitution? 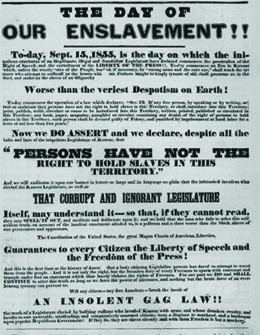 Figure 1. This full-page editorial ran in the Free-Soiler Kansas Tribune on September 15, 1855, the day Kansas’ Act to Punish Offences against Slave Property of 1855 went into effect. This law made it punishable by death to aid or abet a fugitive from slavery, and it called for punishment of no less than two years for anyone who might: “print, publish, write, circulate, or cause to be introduced into this Territory . . . [any materials] . . . containing any denial of the right of persons to hold slaves in this Territory.”

In 1856, clashes between antislavery Free-Soilers and border ruffians came to a head in Lawrence, Kansas, a town that had been founded by the New England Emigrant Aid Society. Proslavery emigrants from Missouri were equally determined that no “abolitionist tyrants” or “negro thieves” would control the territory. In the spring of 1856, several of Lawrence’s leading antislavery citizens were indicted for treason, and federal marshal Israel Donaldson called for a posse to help make arrests. He did not have trouble finding volunteers from Missouri. When the posse, which included Douglas County sheriff Samuel Jones, arrived outside Lawrence, the antislavery town’s “committee of safety” agreed on a policy of nonresistance. Most of those who were indicted fled. Donaldson arrested two men without incident and dismissed the posse.

However, Jones, who had been shot during an earlier confrontation in the town, did not leave. On May 21, falsely claiming that he had a court order to do so, Jones took command of the posse and rode into town armed with rifles, revolvers, cutlasses, and bowie knives. At the head of the procession, two flags flew: an American flag and a flag with a crouching tiger. Other banners followed, bearing the words “Southern rights” and “The Superiority of the White Race.” In the rear were five artillery pieces, which were dragged to the center of town. The posse smashed the presses of the two newspapers, Herald of Freedom and the Kansas Free State, and burned down the deserted Free State Hotel. When the posse finally left, Lawrence residents found themselves unharmed but terrified. 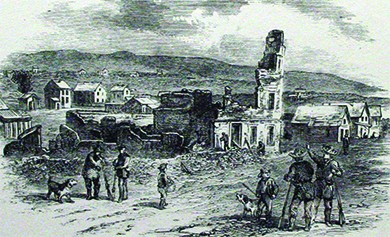 Figure 2. This undated image shows the aftermath of the sacking of Lawrence, Kansas, by border ruffians. Shown are the ruins of the Free State Hotel.

The next morning, a man named John Brown and his sons, who were on their way to provide Lawrence with reinforcements, heard the news of the attack. Brown, a strict, God-fearing Calvinist and staunch abolitionist, once remarked that “God had raised him up on purpose to break the jaws of the wicked.” Disappointed that the citizens of Lawrence did not resist the “slave hounds” of Missouri, Brown opted not to go to Lawrence, but to the homes of proslavery settlers near Pottawatomie Creek in Kansas. The group of seven, including Brown’s four sons, arrived on May 24, 1856, and announced they were the “Northern Army” that had come to serve justice. They burst into the cabin of proslavery Tennessean James Doyle and marched him and two of his sons off, sparing the youngest at the desperate request of Doyle’s wife, Mahala. One hundred yards down the road, Owen and Salmon Brown hacked their captives to death with broadswords and John Brown shot a bullet into Doyle’s forehead. Before the night was done, the Browns visited two more cabins and brutally executed two other proslavery settlers. None of those executed enslaved any people or had had anything to do with the raid on Lawrence. This became known as the Pottawatomie Massacre, and was one of several violent clashes occurring during the summer of 1856.

Brown’s actions precipitated a new wave of violence. All told, the guerilla warfare between proslavery “border ruffians” and antislavery forces, which would continue and even escalate during the Civil War, resulted in over 150 deaths and significant property loss. The events showed that popular sovereignty did not resolve the question of slavery in the West as its proponents claimed. Instead, it encouraged pro-slavery and anti-slavery forces to compete and clash with one another. As the violence increased, Kansas became known as “Bleeding Kansas.” Antislavery advocates’ use of force carved out a new direction for some who opposed slavery. Distancing themselves from William Lloyd Garrison and other pacifists, Brown and his followers believed the time had come to fight slavery with violence.

History at the movies

In 1940, Warner Brothers released the film Santa Fe Trail. Starring Errol Flynn and Ronald Reagan, the film dramatizes the U.S. military response to John Brown’s raids in Kansas. Made in the style of a traditional Hollywood western, the film has a number of historical inaccuracies. Characters use revolvers that would not be invented for another twenty years after the purported events of the film, and places historical figures who were never in Kansas territory, notably George A. Custer, in the center of the action. For our purposes, however, the film is interesting because it shows how John Brown and abolitionists were commonly remembered in 1940. As you watch, take note of how abolitionists are portrayed as zealots, and how warm, personal friendship between Northern and Southern West Point cadets is valorized.

The violent hostilities associated with Bleeding Kansas spilled into Congress itself. It was the controversy over Kansas that prompted the caning of Charles Sumner, introduced at the beginning of this module with the political cartoon Southern Chivalry: Argument versus Club’s. Note the title of the cartoon; it lampoons the southern ideal of chivalry, the code of behavior that Preston Brooks believed he was following in his attack on Sumner. In Sumner’s “Crime against Kansas” speech he went much further than politics, filling his verbal attack with allusions to sexuality by singling out fellow senator Andrew Butler from South Carolina, a zealous supporter of slavery and Brooks’s uncle.

Sumner insulted Butler by comparing slavery to prostitution, declaring, “Of course he [Butler] has chosen a mistress to whom he has made his vows, and who, though ugly to others, is always lovely to him; though polluted in the sight of the world, is chaste in his sight. I mean the harlot Slavery.” Because Butler was aged, it was his nephew, Brooks, who sought satisfaction for Sumner’s attack on his family and southern honor.

Tellingly, Brooks did not challenge Sumner to a duel; by choosing to beat him with a cane instead, he made it clear that he did not consider Sumner a gentleman. Many in the South rejoiced over Brooks’s defense of slavery, southern society, and family honor, sending him hundreds of canes to replace the one he had broken assaulting Sumner. The attack by Brooks left Sumner incapacitated physically and mentally for a long period of time. Despite his injuries, Massachusetts continued to reelect him.

This History Channel video summarizes the hostilities and violence related to Bleeding Kansas.

You can view the transcript for “Sound Smart: Bleeding Kansas | History” here (opens in new window).

How did the “Bleeding Kansas” incident change the face of antislavery advocacy?

Show Answer
In response to proslavery forces’ destruction of the antislavery press and Free State Hotel, radical abolitionists, including John Brown, murdered proslavery settlers at Pottawatomie. This was a turning point for Brown and many other radical abolitionists, who—unlike their largely pacifist counterparts, such as William Lloyd Garrison—came to believe that slavery must be extinguished by any means necessary, including open violence.

Bleeding Kansas: a reference to the violent clashes in Kansas between Free-Soilers and slavery supporters

border ruffians: proslavery Missourians who crossed the border into Kansas to influence the legislature