In the early 1850s, the United States’ sectional crisis had abated somewhat, cooled by the Compromise of 1850 and the nation’s general prosperity. As the election of 1852 arrived, both the Democrats and Whigs had to tow a careful line to please both their Northern and Southern factions. Having won two elections by putting military heroes forward, the Whig Party tried this tactic one more time. Their candidate, Winfield Scott, was a national hero and a brilliant military strategist, but a poor speaker whose views were not well-known or understood.

In contrast, the Democrats picked a dark horse candidate with as little baggage as they could find: Franklin Pierce, a young, handsome former senator from New Hampshire. As a Northerner with no patience for abolitionists, he became the most agreeable choice among the party’s competing factions. Pierce was a supporter of the “Young America” movement of the Democratic Party, which enthusiastically anticipated extending democracy around the world and annexing additional territory for the United States. Both men endorsed the Compromise of 1850. With the Whig Party collapsing in the South due in part to the compromise’s unpopularity, Pierce won the election handily. The brief period of tranquility between the North and South did not survive the passage of the Kansas-Nebraska Act in 1854. This act led to the formation of a new political party, the Republican Party, that committed itself to ending the further expansion of slavery.

The relative calm over the sectional issue was broken in 1854 over the issue of slavery in the territory of Kansas. Pressure had been building among northerners to organize Iowa, which had been admitted to the Union as a free state in 1846, and the territory further west. This pressure came primarily from northern farmers, who wanted the federal government to survey the land and put it up for sale. Promoters of a transcontinental railroad were also pushing for this westward expansion. 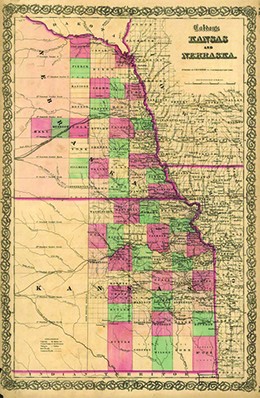 Figure 1. This 1855 map shows the new territories of Kansas and Nebraska, complete with proposed routes of the transcontinental railroad.

Southerners, however, had long opposed the Wilmot Proviso’s stipulation that slavery should not expand into the West. By the 1850s, many in the South were also growing resentful of the Missouri Compromise of 1820, which established the 36° 30′ parallel as the geographical boundary of slavery on the north-south axis. Proslavery southerners now contended that popular sovereignty should apply to all territories, not just Utah and New Mexico. They argued for the right to bring their enslaved property wherever they chose.

Attitudes toward slavery in the 1850s were represented by a variety of regional factions. For three decades, the abolitionists remained a minority, but they had a significant effect on American society by bringing the evils of slavery into the public consciousness. In 1840, the Liberty Party was the first political organization to campaign for abolition. This group sought to work within the existing political system, a strategy Garrison and other zealous abolitionists rejected. Meanwhile, the Free-Soil Party committed itself to ensuring that White laborers would find work in newly acquired territories and not have to compete with unpaid enslaved people. By the 1850s, some abolitionists advocated the use of violence against enslavers.

It is important to note that, even among those who opposed the expansion of slavery in the West, very different attitudes toward slavery existed. Some antislavery northerners wanted the West reserved for poor Whites to go and seek opportunity. They did not want White workers to have to compete with the labor of enslaved people, a contest that they believed demeaned White laborers and put them at a disadvantage. Radical abolitionists, in contrast, envisioned the end of all slavery, and a society of equality between Blacks and Whites. Others opposed slavery in principle but did not believe that two races could share society equitably and peacefully. These individuals sometimes favored colonization, that is, settling freed enslaved people in a colony in Africa.

The growing political movement to address the issue of slavery stiffened the resolve of southern slaveholders to defend themselves and their society at all costs. Prohibiting slavery’s expansion, they argued, ran counter to basic American property rights. As abolitionists fanned the flames of antislavery sentiment, southerners solidified their defense of their enormous investment in human chattel. Across the country, people of all political stripes worried that the nation’s arguments would cause irreparable rifts in the country.

As these different factions were agitating for the settlement of Kansas and Nebraska, leaders of the Democratic Party in 1853 and 1854 sought to bind their party together in the aftermath of intraparty fights over the distribution of patronage jobs. Illinois Democratic senator Stephen Douglas believed he had found a solution—the Kansas-Nebraska bill—that would promote party unity and also satisfy his colleagues from the South, who detested the Missouri Compromise line. In January 1854, Douglas introduced the bill. The act created two territories: Kansas, directly west of Missouri; and Nebraska, west of Iowa. The act also applied the principle of popular sovereignty, dictating that the people of these territories would decide for themselves whether to adopt slavery. In a concession crucial to many southerners, the proposed bill would also repeal the 36° 30′ line from the Missouri Compromise. Douglas hoped his bill would increase his political capital and provide a step forward on his quest for the presidency. Douglas also wanted the territory organized in hopes of placing the eastern terminus of a transcontinental railroad in his hometown of Chicago, rather than St. Louis or New Orleans.

This video discusses the controversies surrounding the Kansas-Nebraska Act and the ensuing clashes that led to the creation of the Republican party.

You can view the transcript for “How one piece of legislation divided a nation – Ben Labaree, Jr.” here (opens in new window).

After heated debates, Congress narrowly passed the Kansas-Nebraska Act. (In the House of Representatives, the bill passed by a mere three votes: 113 to 110.) This would have major political consequences. The Democrats divided along sectional lines as a result of the bill, and the Whig party, in decline in the early 1850s, found its political power slipping further. Most important, opposition to the Kansas-Nebraska Act gave rise to the Republican Party, a new political party that attracted northern Whigs, anti-slavery Democrats, members of the now redundant Free-Soil Party, and assorted abolitionists.

The new Republican Party pledged itself to preventing the spread of slavery into the territories and railed against the Slave Power, infuriating the South. As a result, the party became a solidly northern political organization. As never before, the U.S. political system was polarized along sectional fault lines.

The Republican Party—Then and Now

How did the Republican Party from the 1850s turn into the Republican Party that we know today? The process was long and slow, with new issues resulting in new ideologies and changing values over the years. The Republican Party, also known as the Grand Old Party, or GOP,  was founded in 1854 by opponents of the Kansas–Nebraska Act. The party supported economic reform and classical liberalism while opposing the expansion of slavery. Abraham Lincoln was the first Republican president. Under the leadership of Lincoln and a Republican Congress, slavery was banned in the United States in 1865. The GOP was generally dominant during the Third and the Fourth Party System periods, or into the 1930s. It was strongly committed to protectionism and tariffs at its founding, but grew more supportive of free trade in the 20th century.

After 1912, the Republican Party began to undergo an ideological shift to the right. Following the Civil Rights Act of 1964 and the Voting Rights Act of 1965, the party’s core base shifted, with southern states becoming more reliably Republican in presidential politics. After the Supreme Court’s 1973 decision in Roe v. Wade, the Republican Party opposed abortion in its party platform and grew its support among evangelicals. Its 21st-century ideology is American conservatism, which incorporates both social conservatism and fiscal conservatism. The GOP today supports lower taxes, free-market capitalism, restrictions on immigration, increased military spending, gun rights, restrictions on abortion, deregulation, and restrictions on labor unions.

Kansas-Nebraska Act: Bill sponsored by Stephen Douglas that reversed the Missouri Compromise and created the territories of Kansas and Nebraska