Economic Development during the Civil War and Reconstruction

The Civil War transformed both the Northern and Southern economies. The Northern economy would become much more industrialized; this was necessary to produce what was needed for the Union to defeat the Confederacy. Before the war, the Southern economy was based on agriculture, with very little industry. As the war progressed, some industrialization increased in the South, but by the end of the war, any Southern industry was destroyed. This would all have to be rebuilt in the aftermath of the war. In 1859 and 1860, wealthy Southern planters were flush after producing record cotton crops. Southern prosperity relied on over four million enslaved Black people to grow cotton, along with a number of other staple crops across the region. Cotton fed the textile mills of America and Europe and brought great wealth to the region. On the eve of war, the American South enjoyed more per capita wealth than any other slave economy in the New World. To their enslavers, these people constituted their most valuable assets, worth roughly $3 billion. Yet this wealth obscured the gains in infrastructure, industrial production, and financial markets that occurred north of the Mason-Dixon Line (the border between Pennsylvania and Maryland indicating the division between the North and South), a fact that the war would unmask for all to see.

Economic Developments in the North and South

In contrast to the slave South, Northerners praised their region as a land of free labor, populated by farmers, merchants, and wage laborers. Many of these wage laborers were newly-arrived immigrants from Europe. The North was also home to a robust market economy. By 1860, Northerners could buy clothing made in a New England factory, or light their homes with kerosene oil from Pennsylvania. The first oil well was drilled by Edwin “Colonel” Drake near Titusville, Pennsylvania in 1859. The Midwest produced seas of grain that fed the country, with enough left over for export to Europe.

Before the war began, many planters in the South believed that “King Cotton” would save them—that Great Britain would have to have cotton for its mills, therefore providing a way for the South to make money to obtain the supplies needed for war. They had forgotten that the past few years had been bumper cotton crops, giving Great Britain a plentiful supply. It just happened that Britain had a grain shortage during the first couple of years of the Civil War and needed to import grain from the United States. It is very possible that this kept Great Britain from allying itself with the Confederacy because it needed this grain which would come through the North. Great Britain did sell goods and equipment to the Confederacy during the Civil War, but just enough not to upset the Union, so that the North would still sell grain to Britain.

Farther west, mining and agriculture were the mainstays of life. Along with the textile mills, shoe factories, and iron foundries, the firms that produced McCormick’s wheat harvesters and Colt’s firearms displayed the technical advances of northern manufacturers. Their goods crisscrossed the country on the North’s growing railroad network. In 1860 on the eve of the Civil War, there were 30,000 miles of railroad tracks in the United States: approximately 22,000 in the North and the rest in the South. The railroads in the North were a well-integrated system, but in the South, most of the railroads ran north to south and were of different gauges, which means the railroads were different widths. This meant that spur lines could not be built, thus further complicating the integration of Southern railroads. In many cases, wagon trains would have to be used to take goods from one north-south running railroad to another. An extensive network of banks and financial markets helped aggregate capital that could be reinvested into further growth.

Inflation and Money in the Post-War Economy 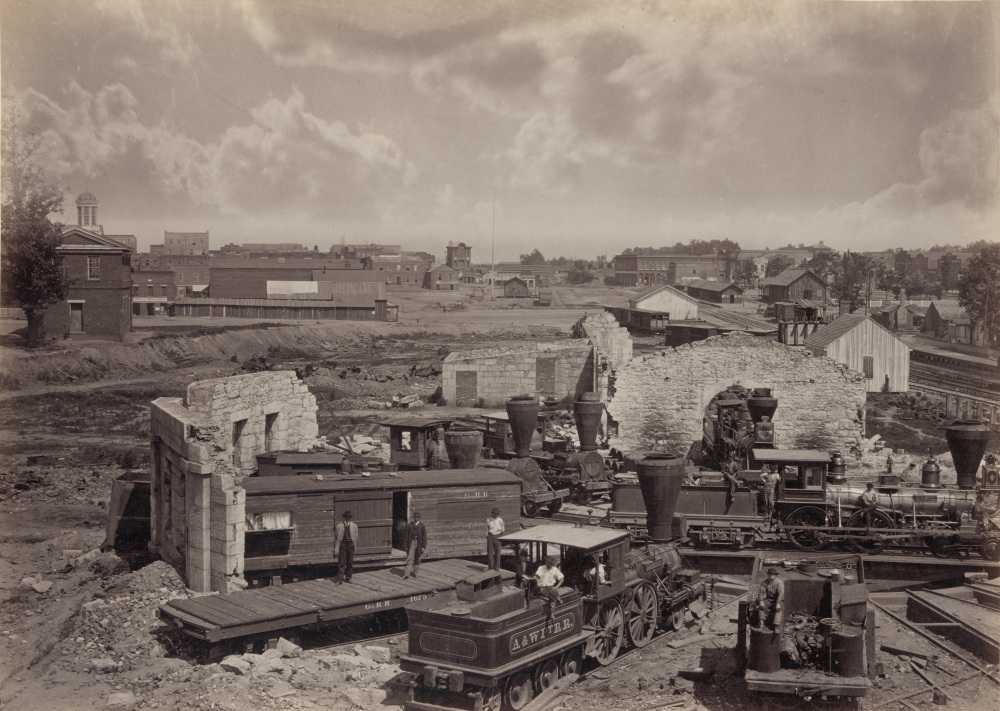 The Civil War, like all wars, interrupted the rhythms of commercial life by destroying lives and property. This was especially true in the South. From 1861 onward, the Confederate government struggled to find the guns, food, and supplies needed to field an army. Southerners did make astonishing gains in industrial production during this time, but it was never enough. The Union’s blockade of the Atlantic prevented the Confederacy from financing the war with cotton sales to Europe. To pay their troops and keep the economy alive, the Confederate Congress turned to printing paper money that quickly sank in value and led to rapid inflation. During the war, prices in the Confederacy rose 7,000 to 9,000 percent, depending on the goods. This is far more than the Union, which had 80 percent inflation. In many cases, Confederate officials dispensed with taxes paid in cash and simply impressed the food and materials needed from their citizens. Perhaps most striking of all, in the vast agricultural wealth of the South, many southerners struggled to find enough to eat.

The war also pushed the U.S. government to take unprecedented steps. Congress raised tariffs and passed the first national income tax in 1862. In late 1861, Congress created the nation’s first fiat currency, called greenbacks. At first, the expansion of the currency and the rapid rise in government spending created an uptick in business in 1862–1863. As the war dragged on, inflation also hit the North. Workers demanded higher wages to pay rents and buy necessities, while the business community groaned under their growing tax burden. The United States, however, never embarked on a policy of impressment for food and supplies. The factories and farms of the North successfully supplied Union troops, while the federal government, with some adjustments, found the means to pay for war. None of this is to suggest that the North’s superior ability to supply its war machine made the outcome of the war inevitable. Any account of the war must consider the tangled web of politics, battles, and economics that occurred between 1861 and 1865. But the aftermath of the war left portions of the Confederacy in ruins. State governments were mired in debt. White planters had most of their capital tied up in enslaved laborers, and so lost most of their wealth. Cotton remained the most significant crop, but the war changed how it was grown and sold. Planters broke up large farms into smaller plots tended by single families in exchange for a portion of the crop, a system called sharecropping. Once cotton production resumed, Americans found that their cotton now competed with new cotton plantations around the world. For the South as a whole, the war and Reconstruction marked the start of a period of deep poverty that would last until at least the New Deal of the 1930s. 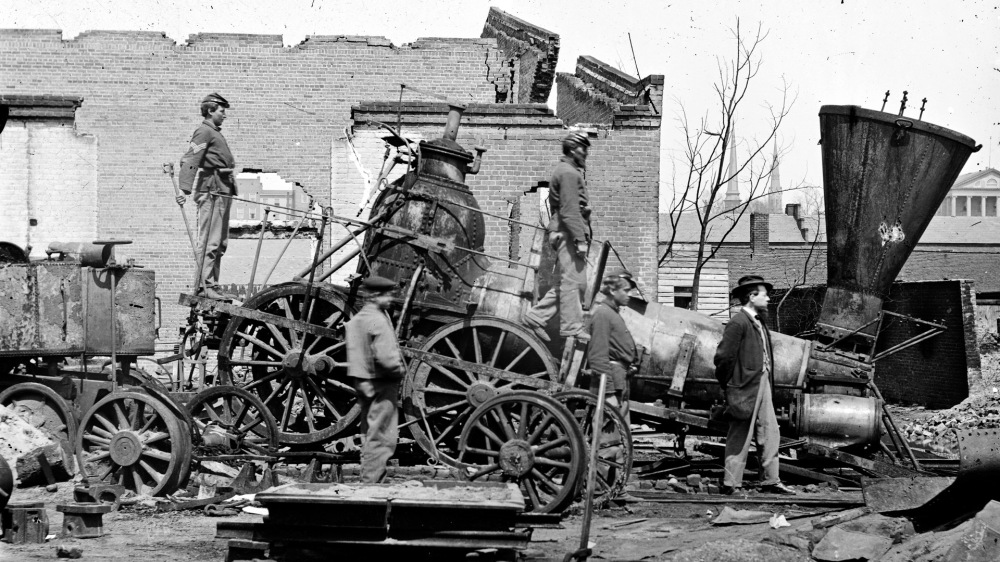 Figure 2. War brought destruction across the South. Governmental and private buildings, communication systems, the economy, and transportation infrastructure were all debilitated.

Emancipation was the single most important economic, social, and political outcome of the war. Freedom empowered Black people in the South to rebuild families, make contracts, hold property, and move freely for the first time. Republicans in the South attempted to transform the region into a free-labor economy like the North. Yet the transition from slave labor to free labor was not seamless. Well into the twentieth century, White Southerners used a combination of legal coercion and extralegal violence to maintain systems of bound labor. Vagrancy laws enabled law enforcement to justify the arrest of innocent Black men and women, and the convict-lease system meant that arbitrary arrests often resulted in decades of forced, uncompensated labor. But this new form of servitude, which continued until World War II, was only the most extreme example of an array of economic injustices. In the later nineteenth century, poor White people would form mobs and go “white-capping” to scare away Black job seekers. White-capping is the use of vigilante justice. Lacking the means to buy their own farms, Black farmers often turned to sharecropping. Sharecropping often led to cycles of debt that kept families bound to the land.

Victory did not produce a sudden economic boom for the rest of the United States, either. The North would not regain its prewar pace of industrial and commodity output until the 1870s. But the war did prove beneficial to wealthy Northern farmers who could afford new technologies. Wartime labor shortages promoted the use of mechanical reapers, reducing demand for labor, boosting farm yields, and sowing the seeds of inequality.

Wartime laws also transformed the relationship between the federal government and the American economy. New tariff laws sheltered northern industry from European competition. The Morrill Land Grant helped create colleges such as the University of California, the University of Illinois, and the University of Wisconsin. With the creation of the national banking system and greenbacks, Congress replaced hundreds of state banknotes with a system of federal currency that accelerated trade and exchange. This was not to say that Republican policy worked for everyone. The Homestead Act, meant to open the West to small farmers, was often frustrated by railroad corporations and speculators who bought large sections of land, broke them up, and charged more for parcels than they were worth. The Transcontinental Railroad, launched during the war, failed to produce substantial economic gains for years.

The war years forged a close relationship between government and the business elite, a relationship that sometimes resulted in corruption and catastrophe, as it did when markets crashed on Black Friday, September 24, 1869. This new relationship created a political backlash, especially in the West and South, against Washington’s perceived eastern and industrial bias. Conflicts over emancipation and civil rights quickly gave way to long political conflict over the direction of American economic development.