The English in America

Spain had a one-hundred year head start on New World colonization and a jealous England eyed the enormous wealth that Spain gleaned from the New World.

Disruptions during the Tudor monarchy—especially the creation of the Protestant Church of England by Henry VIII in the 1530s, the return of the nation to Catholicism under Queen Mary in the 1550s, and the restoration of Protestantism under Queen Elizabeth—left England with little energy for overseas projects. More important, England lacked the financial resources for such endeavors. Nonetheless, English monarchs carefully monitored developments in the newly emerging Atlantic World and took steps to assert England’s claim to the Americas. As early as 1497, Henry VII of England had commissioned John Cabot, an Italian mariner, to explore new lands. Cabot sailed from England that year and made landfall somewhere along the North American coastline. For the next century, English fishermen routinely crossed the Atlantic to fish the rich waters off the North American coast. However, English colonization efforts in the 1500s were closer to home, as England devoted its energy to the colonization of Ireland.

The Protestant Reformation had shaken England but Elizabeth I’s assumption of the crown in 1558 marked the beginning of England’s so-called “golden age,” when the nation flourished culturally and economically. Shakespeare and Marlowe would author works that transformed both literature and spoken English. English mercantilism, a state-assisted manufacturing and trading system, created and maintained markets, ensured a steady supply of consumers and laborers, stimulated economic expansion, and increased English wealth.

However, wrenching social and economic changes unsettled the English population. The island’s population increased from fewer than three million in 1500 to over five million by the middle of the seventeenth century. The skyrocketing cost of land coincided with plummeting farming income. Rents and prices rose but wages stagnated. Moreover, the so-called “enclosure” movement—sparked by the transition of English landholders from agriculture to livestock-raising—evicted tenants from the land and created hordes of landless, jobless peasants that haunted the cities and countryside. One-quarter to one-half of the population lived in extreme poverty.

Many cited spiritual concerns and argued that colonization would glorify God, England, and Protestantism by Christianizing the New World’s pagan peoples. Advocates such as Richard Hakluyt the Younger and John Dee, for instance, drew upon The History of the Kings of Britain, written by the twelfth-century monk Geoffrey of Monmouth, and its mythical account of King Arthur’s conquest and Christianization of pagan lands to justify American conquest. Moreover, promoters promised that the conversion of New World Indians would satisfy God and glorify England’s “Virgin Queen,” Elizabeth I, who was approaching a nearly-divine status among the English. The English—and other European Protestant colonizers—imagined themselves superior to the Spanish, who still bore the Black Legend of inhuman cruelty. English colonization, supporters argued, would prove that superiority.

In Defense of Colonization

In his 1584 “Discourse on Western Planting,” Richard Hakluyt amassed the supposed religious, moral, and exceptional economic benefits of colonization. He repeated the “Black Legend” of Spanish New World terrorism and attacked the sins of Catholic Spain. He promised that English colonization could strike a blow against Spanish heresy and bring Protestant religion to the New World. English interference, Hakluyt suggested, might provide the only salvation from Catholic rule in the New World. The New World, too, he said, offered obvious economic advantages. Trade and resource extraction would enrich the English treasury. England, for instance, could find plentiful materials to outfit a world-class navy. Moreover, he said, the New World could provide an escape for England’s vast armies of landless “vagabonds.” Expanded trade, he argued, would not only bring profit, but also provide work for England’s jobless poor. A Christian enterprise, a blow against Spain, an economic stimulus, and a social safety valve all beckoned the English toward a commitment to colonization.

English-Spanish Tensions and the Spanish Armada

Rather than formal colonization, however, the most successful early English ventures in the New World were a form of state-sponsored piracy known as privateering. Queen Elizabeth sponsored sailors, or “Sea Dogges,” such as John Hawkins and Francis Drake, to plunder Spanish ships and towns in the Americas. Privateers earned a substantial profit both for themselves and for the English crown. Each year the English took more than £100,000 from Spain in this way; English privateer Francis Drake first made a name for himself when, in 1573, he looted silver, gold, and pearls worth £40,000. England practiced piracy on a scale, one historian wrote, “that transforms crime into politics.” Francis Drake harried Spanish ships throughout the Western Hemisphere and raided Spanish fleets as far away as the coast of Peru on the Pacific Ocean. In 1580 Elizabeth rewarded her skilled pirate with knighthood. But Elizabeth walked a fine line. Protestant-Catholic tensions were already running high, and English privateering provoked Spain. Tensions worsened after the execution of Mary, Queen of Scots, a Catholic. In 1588, King Philip II of Spain unleashed the fabled Spanish Armada. With 130 Ships, 8,000 sailors, and 18,000 soldiers, Spain launched the largest invasion in history to destroy the British navy and depose Elizabeth.

An island nation, England depended upon a robust navy for trade and territorial expansion. England had fewer ships than Spain but they were smaller and swifter. They successfully harassed the Armada, forcing it to retreat to the Netherlands for reinforcements. But then a fluke storm, celebrated in England as the “divine wind,” annihilated the remainder of the fleet. The destruction of the Armada changed the course of world history. It not only saved England and secured English Protestantism, but it also opened the seas to English expansion and paved the way for England’s colonial future. By 1600, England stood ready to embark upon its dominance over North America. 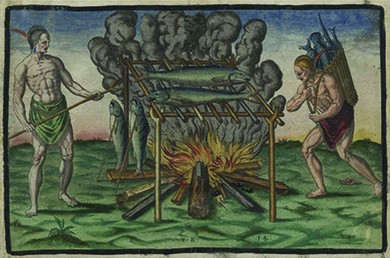 Figure 2. In 1588, a promoter of English colonization named Thomas Hariot published A Briefe and True Report of the New Found Land of Virginia, which contained many engravings of the native peoples who lived on the Carolina coast in the 1580s. This print, “The brovvyllinge of their fishe ouer the flame” (1590) by Theodor de Bry, shows the ingenuity and wisdom of the “savages” of the New World.

Elizabeth sanctioned an early attempt at colonization in 1584, when Sir Walter Raleigh, a favorite of the queen’s, attempted to establish a colony at Roanoke, an island off the coast of present-day North Carolina. The colony was small, consisting of only 117 people, who suffered a poor relationship with the local Indians, the Croatans, and struggled to survive in their new land. Their governor, John White, returned to England in late 1587 to secure more people and supplies, but events conspired to keep him away from Roanoke for three years. By the time he returned in 1590, the entire colony had vanished. The only trace of the colonists left behind was the word Croatoan carved into a fence surrounding the village. Governor White never knew whether the colonists had decamped for nearby Croatoan Island (now Hatteras) or whether some disaster had befallen them all. Roanoke is still called “the lost colony.”

When Queen Elizabeth died in 1603, no Englishmen had yet established a permanent North American colony.

After King James made peace with Spain in 1604, privateering no longer held out the promise of cheap wealth. Colonization assumed a new urgency. In the early 1600s, wealthy English merchants and the landed elite began to pool their resources to form joint-stock companies. In this novel business arrangement, which was in many ways the precursor to the modern corporation, investors provided the capital for and assumed the risk of a venture in order to reap significant returns. The companies gained the approval of the English crown to establish colonies, and their investors dreamed of reaping great profits from the money they put into overseas colonization. The Virginia Company, established in 1606, drew inspiration from Cortes and the Spanish conquests. It hoped to find gold and silver as well as other valuable trading commodities in the New World: glass, iron, furs, pitch, tar, and anything else the country could supply. The Company planned to identify a navigable river with a deep harbor, away from the eyes of the Spanish. There they would find an Indian trading network and extract a fortune from the New World.

The first permanent English settlement was established by a joint-stock company, the Virginia Company. Named for Elizabeth, the “Virgin Queen,” the company gained royal approval to establish a colony on the east coast of North America, and in 1606, it sent 144 men and boys to the New World. In early 1607, this group sailed up Chesapeake Bay. Finding a river they called the James in honor of their new king, James I, they established a ramshackle settlement and named it Jamestown. Despite serious struggles, the colony survived.

By any measure, England came late to the race to colonize. As Jamestown limped along in the 1610s, the Spanish Empire extended around the globe and grew rich from its global colonial project. Yet the English persisted, and for this reason, the Jamestown settlement has a special place in history as the first permanent colony in what later became the United States.

After Jamestown’s founding, English colonization of the New World accelerated. In 1609, a ship bound for Jamestown floundered in a storm and landed on Bermuda. (Some believe this incident helped inspire Shakespeare’s 1611 play The Tempest.) The admiral of the ship, George Somers, claimed the island for the English crown. The English also began to colonize small islands in the Caribbean, an incursion into the Spanish-American empire. They established themselves on small islands such as St. Christopher (1624), Barbados (1627), Nevis (1628), Montserrat (1632), and Antigua (1632).

From the start, the English West Indies had a commercial orientation, for these islands produced cash crops: first tobacco and then sugar. Very quickly, by the mid-1600s, Barbados had become one of the most important English colonies because of the sugar produced there. Barbados was the first English colony dependent on slavery, and it became a model for other English slave societies on the American mainland. These differed radically from England itself, where slavery was not practiced.

English Puritans also began to colonize the Americas in the 1620s and 1630s. These intensely religious migrants dreamed of creating communities of reformed Protestantism where the corruption of England would be eliminated. One of the first groups of Puritans to relocate to North America, known as Pilgrims, settled at Plymouth in 1620. The Pilgrims differed from other Puritans in their insistence on separating from what they saw as the corrupt Church of England. For this reason, Pilgrims are known as Separatists. In 1630, a much larger contingent of Puritans left England to escape conformity to the Church of England and founded the Massachusetts Bay Colony. In the following years, thousands more arrived to create a new life in the rocky soils and cold climates of New England.

In comparison to Catholic Spain, however, Protestant England remained a very weak imperial player in the early seventeenth century, with only a few infant colonies in the Americas in the early 1600s. The English never found treasure equal to that of the Aztec city of Tenochtitlán, and England did not quickly grow rich from its small American outposts. The English colonies also differed from each other; Barbados and Virginia had a decidedly commercial orientation from the start, while the Puritan colonies of New England were intensely religious at their inception. All English settlements in America, however, marked the increasingly important role of England in the Atlantic World.

English colonization would also look very different from Spanish or French colonization, as was indicated by early experiences with the Irish. England had long been trying to conquer Catholic Ireland. The English used a model of forcible segregation with the Irish that would mirror their future relationships with Native Americans. Rather than integrating with the Irish and trying to convert them to Protestantism, England more often simply seized land through violence and pushed out the former inhabitants, leaving them to move elsewhere or to die.