The Dutch in America 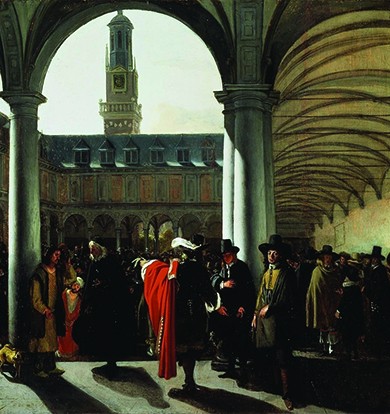 Figure 1. Amsterdam was the richest city in the world in the 1600s. In Courtyard of the Exchange in Amsterdam, a 1653 painting by Emanuel de Witt, merchants involved in the global trade eagerly attend to news of shipping and the prices of commodities.

The Dutch entrance into the Atlantic World is part of the larger story of religious and imperial conflict in the early modern era. In the 1500s, Calvinism, one of the major Protestant reform movements, had found adherents in the northern provinces of the Spanish Netherlands. During the sixteenth century, these provinces began a long struggle to achieve independence from Catholic Spain. Established in 1581 but not recognized as independent by Spain until 1648, the Dutch Republic, or Holland, quickly made itself a powerful force in the race for Atlantic colonies and wealth. After breaking from Spain (the Hapsburgs) they won a reputation as the freest of the new European nations. For example, Dutch women maintained separate legal identities from their husbands and could therefore hold property and inherit full estates.

Ravaged by the turmoil of the Reformation, the Dutch embraced greater religious tolerance and freedom of the press. Radical Protestants, Catholics, and Jews flocked to the Netherlands. The English Pilgrims, for instance, fled first to Holland before sailing to the New World years later.

The Netherlands built its colonial empire through the work of experienced merchants and skilled sailors. The Dutch were the most advanced capitalists in the modern world and marshaled extensive financial resources by creating innovative financial organizations such as the Amsterdam Stock Exchange and the Dutch East India Company, chartered in 1602 to trade in Asia, and the Dutch West India Company, established in 1621 to colonize and trade in the Americas. Although the Dutch offered liberties, they offered very little democracy—power remained in the hands of only a few. And even Dutch liberties had their limits. The Dutch advanced the slave trade and brought enslaved Africans with them to the New World. Slavery was an essential part of Dutch capitalist triumphs. 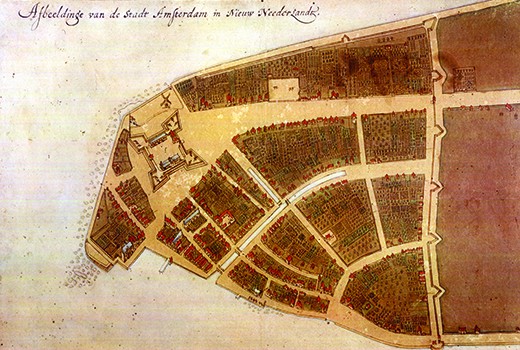 Figure 2. The Castello Plan is the only extant map of 1660 New Amsterdam (present-day New York City). The line with spikes on the right side of the colony is the northeastern wall for which Wall Street was named.

While employed by the Dutch East India Company in 1609, the English sea captain Henry Hudson explored New York Harbor and the river that now bears his name. Like many explorers of the time, Hudson was actually seeking a northwest passage to Asia and its wealth, but the ample furs harvested from the region he explored, especially the coveted beaver pelts, provided a reason to claim it for the Netherlands. The Dutch named their colony New Netherland, and it served as a fur-trading outpost for the expanding and powerful Dutch West India Company. With headquarters in New Amsterdam on the island of Manhattan, the Dutch set up several regional trading posts, including one at Fort Orange—named for the royal Dutch House of Orange-Nassau—in present-day Albany. (The color orange remains significant to the Dutch, having become particularly associated with William of Orange, Protestantism, and the Glorious Revolution of 1688.) A brisk trade in furs with local Algonquian and Iroquois peoples brought the Dutch and native peoples together in a commercial network that extended throughout the Hudson River Valley and beyond.

The Dutch West India Company in turn established Caribbean colonies on Aruba, Bonaire, and Curaçao, St. Martin, St. Eustatius, and Saba. With their outposts in New Netherland and the Caribbean, the Dutch emerged in the seventeenth century as a commercially powerful rival to Spain. Amsterdam became a trade hub for all the Atlantic World.

Spiteful of the Spanish and mindful of the “Black Legend,” the Dutch were determined not to repeat Spanish atrocities. They fashioned guidelines for New Netherland that conformed to the ideas of Hugo Grotius, a legal philosopher who believed native peoples possessed the same natural rights as Europeans. Colony leaders insisted that land be purchased; in 1626 Peter Minuit therefore “bought” Manhattan from Munsee Indians. Despite the honorable intentions, it is very likely that the Munsee and the Dutch understood their transaction in very different terms. Transactions like these illustrated both the Dutch attempt to find a more peaceful process of colonization and the inconsistency between European and Native American understandings of property.

Like the French, the Dutch sought to profit, not to conquer. Trade with Native peoples became New Netherland’s central economic activity. Dutch traders carried wampum along pre-existing Native trade routes and exchanged it for beaver pelts. Wampum consisted of shell beads fashioned by Algonquian Indians on the southern New England coast, and were valued as a ceremonial and diplomatic commodity among the Iroquois. Wampum became a currency that could buy anything from a loaf of bread to a plot of land. Native Americans gathered at trading posts such as the Dutch site at Beverwijck (present-day Albany), where they exchanged furs for guns, blankets, and alcohol. The furs, especially beaver pelts destined for the lucrative European millinery market, would be sent down the Hudson River to New Amsterdam. There, enslaved persons or workers would load them aboard ships bound for Amsterdam.

In addition to developing these trading networks, the Dutch also established farms, settlements, and lumber camps. The West India Company directors implemented the patroon system to encourage colonization. The patroon system granted large estates to wealthy landlords. In return, the shareholder who gained the patroonship promised to pay for the passage of at least thirty Dutch farmers to populate the colony. One of the largest patroonships was granted to Kiliaen van Rensselaer, one of the directors of the Dutch West India Company; it covered most of present-day Albany and Rensselaer Counties. This pattern of settlement created a wide gap in wealth and status between the tenants, who paid rent, and the wealthy patroons.

Expanding Dutch settlements correlated with deteriorating relations with local Indians. In the interior of the continent the Dutch retained valuable alliances with the Iroquois to maintain Beverwijck, modern-day Albany, as a hub for the fur trade. In the places where the Dutch built permanent settlements, the ideals of peaceful colonization succumbed to the settlers’ increasing demand for land. Armed conflicts erupted as colonial settlements encroached on Native villages and hunting lands. Profit and peace, it seemed, could not coexist.

One of the Dutch directors-general of the North American settlement, Peter Stuyvesant, served from 1647 to 1664 and expanded the fledgling outpost of New Netherland east to present-day Long Island and for many miles north along the Hudson River. The resulting elongated colony served primarily as a fur-trading post, with the powerful Dutch West India Company controlling all commerce. Fort Amsterdam, on the southern tip of Manhattan Island, defended the growing city of New Amsterdam. In 1655, Stuyvesant took over the small outpost of New Sweden along the banks of the Delaware River in present-day New Jersey, Pennsylvania, and Delaware. He also defended New Amsterdam from Indian attacks by ordering enslaved Africans to build a protective wall on the city’s northeastern border, giving present-day Wall Street its name.

New Netherland failed to attract many Dutch colonists; by 1664, only nine thousand people were living there. Conflict with native peoples, as well as dissatisfaction with the Dutch West India Company’s trading practices, made the Dutch outpost an undesirable place for many migrants. 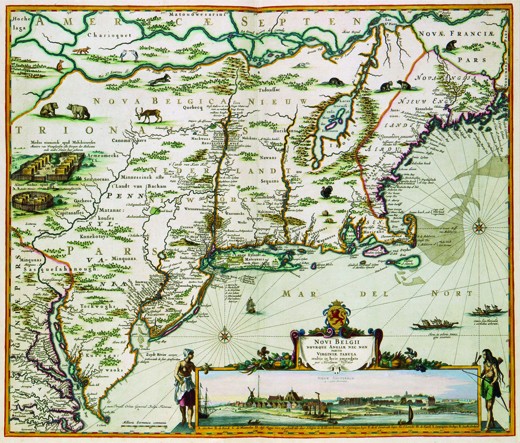 Figure 3. This 1684 map of New Netherland shows the extent of Dutch settlement.

The patroon system failed to bring enough tenants and the colony could not attract a sufficient number of indentured servants to satisfy the colony’s backers. In response, the colony imported 11 company-owned enslaved persons the same year that Minuit purchased Manhattan. The Dutch West India Company imported some 450 Africans as enslaved persons between 1626 and 1664. (The company had involved itself heavily in the slave trade and in 1637 captured Elmina, the slave-trading post on the west coast of Africa, from the Portuguese.) The enslaved were tasked with building New Amsterdam (modern-day New York City). They created its roads and maintained its all-important port. Fears of racial mixing led the Dutch to import enslaved women, enabling the formation of African Dutch families. The colony’s first African marriage occurred in 1641, and by 1650 there were at least 500 Africans enslaved in the colony. By 1660 New Amsterdam had the largest urban slave population on the continent.

As was typical of the practice of African slavery in much of the early seventeenth century, Dutch slavery in New Amsterdam was less comprehensively exploitative than later systems of American slavery. Some enslaved Africans, for instance, successfully sued for back wages. When several company-owned enslaved individuals fought for the colony against the Munsee Indians, they petitioned for their freedom and won a kind of “half freedom” that allowed them to work their own land in return for paying a large tithe, or tax, to their masters. The Dutch, who so proudly touted their liberties, grappled with the reality of African slavery. European colonists, for instance, debated enslaved individuals’ rights and questioned whether the enslaved should be baptized, taught skilled trades, or freed.

The shortage of labor also meant that New Netherland welcomed non-Dutch immigrants, including Protestants from Germany, Sweden, Denmark, and England, and embraced a degree of religious tolerance, allowing Jewish immigrants to become residents beginning in the 1650s. Thus, a wide variety of people lived in New Netherland from the start. Indeed, one observer claimed eighteen different languages could be heard on the streets of New Amsterdam. As new settlers arrived, the colony of New Netherland stretched farther to the north and the west.

How did the French and Dutch colonists differ in their religious expectations? How did both compare to Spanish colonists?

Show Answer
The Dutch allowed the most religious freedoms; they didn’t try to convert native peoples to Christianity, and they allowed Jewish immigrants to join their colony. French Jesuit missionaries tried to convert Indians to Catholicism, but with much more acceptance of their differences than Spanish missionaries.

patroonship: large tract of land and governing rights granted to merchants by the Dutch West India Company in order to encourage colonization

wampum: shell beads used in Native American ceremonies and as jewelry and currency