The French in America

Spanish exploits in the New World whetted the appetite of other would-be imperial powers, including France. Like Spain, France was a Catholic nation and committed to expanding Catholicism around the globe. In the early sixteenth century, it joined the race to explore the New World and exploit the resources of the Western Hemisphere. Early French explorers sought a fabled Northwest Passage, a mythical waterway passing through the North American continent to Asia. Despite the wealth of the New World, Asia’s riches still beckoned to Europeans. Canada’s Saint Lawrence River at first glance appeared to be such a passage, stretching deep into the continent and into the Great Lakes. French colonial possessions centered on these bodies of water (and, later, down the Mississippi River to the port of New Orleans). Navigator Jacques Cartier claimed northern North America for France, naming the area New France. From 1534 to 1541, he made three voyages of discovery on the Gulf of St. Lawrence and the St. Lawrence River. Like other explorers, Cartier made exaggerated claims of mineral wealth in America, but he was unable to send great riches back to France. Due to resistance from the First Nations peoples (as the Indigenous people in Canada are known) as well as his own lack of planning, he could not establish a permanent settlement in North America. 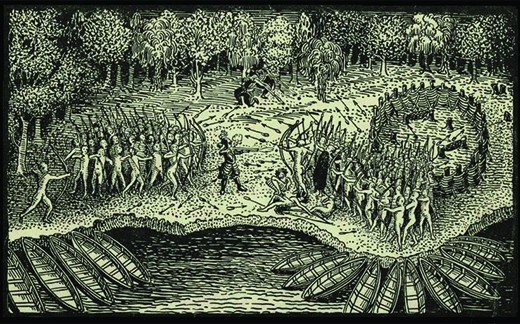 Figure 1. In this engraving, titled Defeat of the Iroquois and based on a drawing by explorer Samuel de Champlain, Champlain is shown fighting on the side of the Huron and Algonquins against the Iroquois. He portrays himself in the middle of the battle, firing a gun, while the Native American people around him shoot arrows at each other. What does this engraving suggest about the impact of European exploration and settlement on the Americas?

Explorer Samuel de Champlain is remembered in the history of the Atlantic World for his role in establishing the French presence in the New World. Champlain explored the Caribbean in 1601 and then the coast of New England in 1603 before traveling farther north. In 1608 he founded Quebec, and he made numerous Atlantic crossings as he worked tirelessly to promote New France.

Quebec provided the foothold for what would become New France. French fur traders placed a higher value on cooperating with the Indigenous populations than on establishing a successful French colonial footprint. Few Frenchmen traveled to the New World to settle permanently. In fact, few traveled at all; by 1640, fewer than four hundred settlers had made their home there. The French crown, eager to maintain its population advantage over its European rivals, actively discouraged migration and encouraged rumors that New France was a frozen deathtrap. Many persecuted French Protestants (Huguenots) sought to emigrate after France criminalized Protestantism in 1685, but all non-Catholics were forbidden in New France.

The sparse French presence meant that colonists depended on the local Algonquian people; without them, the French would have perished. French fishermen, explorers, and fur traders made extensive contact with the Algonquian. The Algonquian, in turn, tolerated the French because the colonists supplied them with firearms for their ongoing war with the Iroquois. Thus, the French found themselves escalating Indigenous wars and supporting the Algonquian against the Iroquois, who received weapons from their Dutch trading partners. These seventeenth-century conflicts centered on the lucrative trade in beaver pelts, earning them the name of the Beaver Wars. In these wars, fighting between rival Indigenous peoples spread throughout the Great Lakes region.

A handful of French Jesuit priests also made their way to Canada, intent on converting the First Nations inhabitants to Catholicism. The Jesuits were members of the Society of Jesus, an elite religious order founded in the 1540s to spread Catholicism and combat the spread of Protestantism. The first Jesuits arrived in Quebec in the 1620s, and for the next century, their numbers did not exceed forty priests. Like the Spanish Franciscan missionaries, the Jesuits in the colony called New France labored to convert the First Nations peoples to Catholicism. They wrote detailed annual reports about their progress in bringing the faith to the Algonquian and, beginning in the 1660s, to the Iroquois. These documents are known as the Jesuit Relations, and they provide a rich source for understanding both the Jesuit view of the First Nations and their response to the colonizers.

One First Nations convert to Catholicism, a Mohawk woman named Katherine Tekakwitha, so impressed the priests with her piety that a Jesuit named Claude Chauchetière attempted to make her a saint in the Church. However, the effort to canonize Tekakwitha faltered when leaders of the Church balked at elevating a “savage” to such a high status; she was eventually canonized in 2012. French colonizers pressured the First Nations inhabitants of New France to convert, but they virtually never saw the Indigenous peoples as their equals. 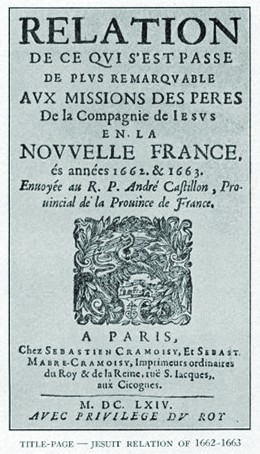 The Jesuit Relations provide incredible detail about Native American life. For example, the 1636 edition, written by the Catholic priest Jean de Brébeuf, addresses the devastating effects of disease on Native American peoples and the efforts made to combat it.

Let us return to the feasts. The Aoutaerohi is a remedy which is only for one particular kind of disease, which they call also Aoutaerohi, from the name of a little Demon as large as the fist, which they say is in the body of the sick man, especially in the part which pains him. They find out that they are sick of this disease, by means of a dream, or by the intervention of some Sorcerer. . . .

Of three kinds of games especially in use among these Peoples,—namely, the games of crosse [lacrosse], dish, and straw,—the first two are, they say, most healing. Is not this worthy of compassion? There is a poor sick man, fevered of body and almost dying, and a miserable Sorcerer will order for him, as a cooling remedy, a game of crosse. Or the sick man himself, sometimes, will have dreamed that he must die unless the whole country shall play crosse for his health; and, no matter how little may be his credit, you will see then in a beautiful field, Village contending against Village, as to who will play crosse the better, and betting against one another Beaver robes and Porcelain collars, so as to excite greater interest.

According to this account, how did Native Americans attempt to cure disease? Why did they prescribe a game of lacrosse? What benefits might these games have for the sick?

The French preference for trade over permanent settlement fostered more cooperative and mutually beneficial relationships with Native Americans than was typical among the Spanish and English. Perhaps eager to debunk the anti-Catholic elements of the Black Legend, the French worked to cultivate cooperation with the Natives. Jesuit missionaries, for instance, adopted different conversion strategies than the Spanish Franciscans. Spanish missionaries brought Native Americans into enclosed missions, whereas Jesuits more often lived with or alongside Native American groups. Many French fur traders married Native American women. The offspring of Native American women and French men were so common in New France that the French developed a word for these children, Métis. The Huron people developed a particularly close relationship with the French and many converted to Christianity and engaged in the fur trade. But close relationships with the French would come at a high cost. The Huron, for instance, were decimated by the ravages of European disease, and entanglements in French and Dutch conflicts proved disastrous. Despite this, some First Nations peoples maintained distant alliances with the French.

Pressure from the powerful Iroquois in the east pushed many Algonquian-speaking peoples toward French territory in the mid-seventeenth century and together they crafted what historians have called a “middle ground,” where Europeans and Native American peoples crafted a kind of cross-cultural space that allowed for Native American and European interaction, negotiation, and accommodation. French traders adopted–sometimes clumsily–the gift-giving and mediation strategies expected of Native American leaders and Native American peoples engaged the impersonal European market and submitted–often haphazardly–to European laws. The Great Lakes “middle ground” experienced tumultuous success throughout the late-seventeenth and early-eighteenth centuries until English colonial officials and American settlers swarmed the region. The pressures of European expansion strained even the closest bonds.

The French created extensive trading networks in New France. These networks relied on Native American hunters to harvest furs, especially beaver pelts, and to exchange these items for French glass beads and other trade goods. (French fashion at the time favored broad-brimmed hats trimmed in beaver fur, so French traders had a ready market for their North American goods.) The French also dreamed of replicating the wealth of Spain by colonizing the tropical zones. After Spanish control of the Caribbean began to weaken, the French turned their attention to small islands in the West Indies, and by 1635 they had colonized two, Guadeloupe and Martinique. Though it lagged far behind Spain, France now boasted its own West Indian colonies. Both islands became lucrative sugar plantation sites that turned a profit for French planters by relying on African slave labor.

Jesuits: members of the Society of Jesus, an elite Catholic religious order founded in the 1540s to spread Catholicism and to combat the spread of Protestantism